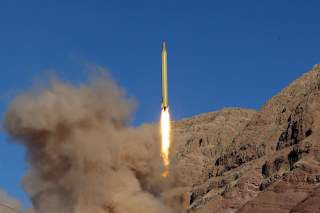 There are troubling signs that the Trump administration is itching for a fight with Iran. While the White House recently certified that Tehran was complying with the nuclear deal, fresh sanctions and thinly veiled references to regime change should raise serious concern that the administration will be searching for any excuse to avoid recertifying Iran’s compliance come the next review in October. In fact, President Donald Trump tasked a team in the White House with coming up with reasons to withhold certification at the next opportunity. And in a July 25 interview with the Wall Street Journal Trump prejudged the October outcome, saying he fully expected Iran to be declared noncompliant.

Breaking the nuclear deal, presumably to keep a campaign promise, could put Washington on a slippery slope towards a military confrontation with Iran. Sabotage of the accord that Iran negotiated, not only with the United States, but also with Russia, China, the United Kingdom, France and Germany, would be received in Tehran as a message that Washington is preparing for military action, and that it must therefore prepare for the worst. This path towards confrontation would wreak havoc on an already unstable Middle East, undermine U.S. national security interests, and potentially put American lives at risk.

There are legitimate reasons for Washington to be alarmed about Iran’s behavior. Tehran has projected its influence deep into the Arab heartland using its al-Quds expeditionary force and through its patronage of militias like Hezbollah, the Iraqi popular mobilization units, the Houthis in Yemen and over 100,000 militiamen in Syria. Its game of tug-of-war with the United States in Iraq is intended to pull Baghdad more fully into Tehran’s political orbit and away from Washington. And provocatively it flexes it's muscle by conducting missile tests and arresting U.S. visitors to Iran.

But distinguishing fact from fiction on Iran is necessary, particularly amidst the bluster from the White House and Congress. It is true that Tehran’s influence in the region has been growing steadily, particularly since Russia entered Syria in 2015 to buttress President Bashar al-Assad, a goal shared by Iran. But it is false that the nuclear deal is somehow to blame for Iran’s success in the regional power game, and that reversing it will deprive Iran of that capability. What has given Iran the capacity to meddle isn’t the nuclear deal, but rather the large political vacuum that now exists smack in the center of the Arab world. The wars in Syria and Iraq in particular, as well as the conflict in Yemen, have hollowed out the center of the Arab world, creating a gaping security hole that has lured in Iran, but also Saudi Arabia and Turkey, into a kind of conflict trap from which it is easier to enter than exit.

Iran has inflamed these conflicts and efforts by Washington to counterbalance Tehran’s regional power make sense. But it is important to understand that the real threat to American national security interests isn’t Iran per se, but rather the vacuum created by the civil wars that allows Tehran and other regional powers to step in. It is the collapse of the regional order, with all the security risks this entails, that is the real threat to U.S. interests. The Syrian civil war, for example, spawned a new Al Qaeda affiliate, Hay’at Tahrir al-Sham, which could eventually take root elsewhere in the region. The conflicts in Syria, Iraq, Yemen and Libya make Trump’s campaign promise of permanently eradicating ISIS unrealizable. The longer the wars continue, the greater is the risk that already weakened countries like Jordan and Lebanon will succumb to civil war, and the greater the threat of instability becomes for Saudi Arabia. Plus, ongoing wars give Russia the opportunity to cement its position as the indispensable actor in the Middle East, a sub-optimal scenario for both the region and the United States.

It is these corrosive effects of the civil wars that represent the real threat to U.S. interests. It should be this overarching challenge, and not a singular focus on Iran, that energizes Washington’s role in the region.

Backing out of the nuclear deal risks further inflaming these civil wars that represent the real threat to U.S. interests in the Middle East. Here are how events could unfold and the regional situation deteriorate should Washington breach the nuclear deal. Tehran will interpret any moves to undermine the nuclear accord as a shot across the bow on the road towards regime change, and it will use all means at its disposal, including its assets in Syria, Iraq, Lebanon and Yemen, to beef up its deterrence and retaliatory capabilities. Under threat, Iran could stir up Shia restiveness in Bahrain and Saudi Arabia, increase support for the Houthis in Yemen, put Hezbollah on alert on Lebanon’s border with Israel, and sow more mischief in Syria and Iraq. Since these actions would take place not in Iran, but in the most volatile areas of the Middle East, they would likely lead to further escalation of the civil wars and greater instability in the region. They could also be sufficiently provocative to push the Trump administration towards military action and into the conflict trap.

Advocates of breaking the nuclear deal could argue that the United States has the capacity to contend with any negative contingencies that might arise using its superior military power. Yes, the United States could mitigate some of the effects of Iran’s actions by inflicting considerable damage on the country’s military infrastructure. But neutralizing the retaliatory and deterrent capabilities Tehran has at its disposal in the civil war zones of Syria, Iraq and Yemen—and Lebanon—won’t be as easy. What Iran lacks in conventional military might, it makes up for with its asymmetric capabilities. Tehran has militias planted right in the heart of the most vulnerable parts of the Arab world, partially as a hedge against U.S. and Israeli threats. Neutralizing these capabilities would require the United States or Israel to engage Iran directly on the ground in Syria, a perilous venture given that Russia operates in the same space and backs Iran. It would also likely require some fighting in neighboring Lebanon, which could throw this country into civil war.

Worse yet for the United States under a scenario where the nuclear deal is breached, the international community would likely give Iran a pass and assign blame to Washington. This would particularly be the case if Iran continues hewing to the terms of the nuclear deal despite a U.S. withdrawal, rendering Washington the pariah. In fact, backing away from the nuclear deal could further cement the relationship between Iran and Russia, turning ties that are today based on a tactical convergence of interests in Syria into something longer term and more strategic. And it is likely to strengthen Russia’s global standing, giving it greater capacity to challenge U.S. leadership of the international order.

But the biggest long-term risk to the security of the United States and the countries of the Middle East of trashing the nuclear accord would be lost opportunities. Iran, along with Saudi Arabia and Turkey, must be part of any solution to end the civil wars that threaten the security, counterterrorism, and energy interests of the United States. Cooperation among the three major regional powers will be necessary to wind down the wars and prevent ISIS from morphing into a new type of threat after the campaigns to liberate Mosul and Raqqa are over. Undermining the nuclear deal would give Iran incentives to move even further away from cooperation than it is today, and would strengthen hardliners in the Iranian government who are predisposed to seeing any cooperation with the United States as a desecration of the principles of the Iranian revolution.

What then should the United States do? Using the threat of force to deter Iran from creating regional mischief might make some sense if it were part of a more comprehensive strategy that also included diplomacy. But breaking the nuclear agreement would kill the opportunity to try diplomatic means, it would give Iran further incentives to play the role of spoiler in a region already in turmoil, it would eliminate the possibility for cooperation in the war against ISIS, and it would likely be construed by Iran as an act of war. Only by a combination of pressure and diplomacy, that includes maintaining the nuclear agreement, can Washington claim a successful Iran policy and avert a crisis in a region so central to U.S. and global security.

Ross Harrison is on the faculty of the School of Foreign Service at Georgetown University, is a scholar at The Middle East Institute, and is also on the faculty of the political science department at the University of Pittsburgh, where he teaches Middle East politics. Harrison authored Strategic Thinking in 3D: A Guide for National Security, Foreign Policy and Business Professionals (Potomac Books, 2013) and co-edited with Paul Salem, From Chaos to Cooperation: Toward Regional Order in the Middle East (Middle East Institute, 2017).

Image: A ballistic missile is launched and tested in an undisclosed location, Iran, March 9, 2016. REUTERS/Mahmood Hosseini/TIMA.