Why Kurdistan Can't Sell Its Oil 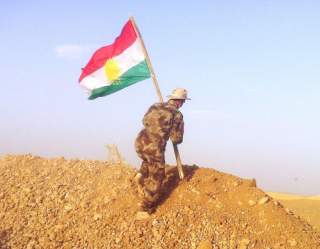 In an interview published in February 2015, Donnie Macdonald, the president of oil giant Chevron’s operations in Iraq, had glowing praise for the Kurdistan autonomous region in north of the country. “The Kurdistan region is still relatively under-explored and we believe the region has potential to become a prominent player in the oil industry”—powerful words during unsettling times. By February 2015, Islamic State had already made fourteen attacks in the direction of Kirkuk, one of the major oil-producing areas in northern Iraq. A bit over a year later, the seven-hundred-mile front line between Kirkuk and Sinjar that is defended by Kurdish forces may be stabilized, but the oil issue is growing increasingly complex. With protests undermining the Iraqi central government's stability, and Kurdish aspirations for independence, the right to export oil is at the heart of a political impasse and economic crisis.

Recent media attention on developments in the oil sector in the Kurdistan Regional Government have painted a complex picture. A Wall Street Journal profile claimed that oil companies investments were turning “sour,” even though the article showed output growing from two hundred thousand to four hundred thousand barrels a day between 2013 and 2015. The pipeline connecting the Kurdistan Regional Government (KRG) to Turkey’s port at Ceyhan was closed in March of this year, cutting off the export of some six hundred thousand barrels a day, according to reports.

When I was in Kurdistan last year, the oil infrastructure was a key bright spot in the country. With hundreds of thousands of men under arms fighting Islamic State, and around 2 million mostly Arab refugees and displaced Kurds and Yazidis who had fled ISIS to the region, the war was the major issue. In the midst of it, oil exploration and infrastructure upgrades in Kirkuk and farther north were continuing. Yet there was a growing financial crisis affecting the local economy and public-sector salaries. A senior source in the Kurdistan Democratic Party (the ruling party in the KRG) pointed out that the problems stem from February 2014, when the central government in Baghdad cut the budget for the KRG. “The international community should acknowledge it is our bravery and determination in the face of ISIS that enabled the liberation of Sinjar,” the area bordering Syria where Yazidis live. “In spite of the monumental challenges and international markets mostly closed to our oil, we are fighting ISIS.”

The Kurdish political parties agree on the requirement that the Iraqi central government share oil revenues with the KRG, and on the negative impact that Baghdad’s policies are having. According to Article 111 of the Iraqi Constitution of 2005, “oil and gas are owned by all the people of Iraq in all the regions and governorates.” The oil revenue is supposed to be distributed in a “fair manner in proportion” to the population of the regions (article 112). Kurdish officials have asserted that any new oil fields that are developed come under the responsibility of the local region. However, companies such as Chevron that signed contracts to develop Kurdistan faced backlash from Baghdad. In 2015, the KRG was negotiating a deal with Baghdad under which the region would provide 550,000 barrels a day, and in return receive the 17 percent of the Iraqi budget that it is entitled to. There are around 5.5 million residents of the KRG; however, the addition of the 2 million refugees and internally displaced people (IDPs) would imply that more than 17 percent should be distributed to the KRG to care for this additional population.

In comments to me earlier this month, KRG spokesperson Safeen Dizayee described a “huge potential” for newfound oil reserves to be developed in the Kurdish region. “This has created the initiative and vision of Prime Minister Nechirvan Barzani to develop this industry and to create the right atmosphere that would enable international oil companies, medium- and large-scale, they are in Kurdistan and are investing heavily in this sector. There have been interruptions due to ISIL and the security issues, but the potential is there, and the vision of KRG’s prime minister office and oil and energy policy is on the right track.”

Dizayee notes that 97 percent of Iraq’s budget comes from oil revenue. The KRG’s budget is similarly heavily reliant on oil, to the tune of 95 percent. The war and the disruptions of budget transfers from Baghdad caused Erbil to look elsewhere for financing. “In a normal situation [we would] utilize the oil revenues to contribute to economic diversification and attach importance to agriculture, tourism, light industry and not be entirely dependent on oil,” said the spokesman.

Once Baghdad reneged on its agreement to transfer 17 percent of the national budget to the KRG the region was forced to find a way to export oil itself. “The KRG is entitled to sale of oil—this is legal and constitutional, particularly at a time when Baghdad denies our rights from the national budget,” says Dizayee. With 1,500 peshmerga (Kurdish armed forces) killed in action, eight thousand wounded and 1.8 million IDPs, the KRG must “find every means to find revenues,” he says. “We will continue in that direction, but if Baghdad is ready to reach an agreement with the KRG we are ready to accommodate an agreement.”

The problem is compounded by other factors. The ISIS attack towards Kirkuk resulted in the KRG forces coming to the defense of the city but it also cemented firmly Kirkuk province, which had been a disputed area with Baghdad, under the control of the KRG. That includes the vast oil fields. In January 2015 the Kurds and the central government seemed to have come to an agreement whereby three hundred thousand barrels a day from the Kirkuk oil fields would be combined with 250,000 barrels a day from other Kurdish areas, to be sold via Baghdad, in exchange for the 17 percent budget. In February, Iraq’s Prime Minister Haider al-Abadi said he would support a new agreement, similar to the 2015 one. Yet the Iraqi government itself was hemorrhaging due to declining oil prices, which reached a low of $30 a barrel that month. Iraq’s 2015 budget had to be slashed from $151 billion to $105 billion due to oil price drops. The 2016 draft budget approved in December was $89 billion which was supposed to include 3.6 million barrels a day of oil export and 550,000 from the KRG region.

Some articles have called the rise of ISIS and declining oil prices a “perfect storm” aimed at an already weakened Iraq. On April 30 protesters, many of them loyal to Shia cleric Muqtada al-Sadr, breached the Green Zone in Baghdad and briefly occupied parliament. This is part of a larger protest against corruption in Baghdad. This chaos does not bode well for the sucess of a KRG-Baghdad agreement. It illustrates the instability of the central government while cementing the view that Kurdistan, which has a stable government, must manage its own resources. In early May Rudaw, a major Kurdish media outlet, reported that a delegation from the KRG Ministry of Natural Resources had met with Iran’s Ministry of Oil to discuss export options via Iran. In the wake of the Iran deal that was signed with the West, that country may offer an alluring pathway to economic cooperation with the KRG. Nevertheless, the main pathway of Kurdish exports remains via Turkey.

With dozens of oil companies doing business in the KRG, many countries have a vested interest in the region’s success. In addition, oil executives such as Tony Hayward continue to be optimistic about developments. The United States recently approved $415 million in aid related to the upcoming Mosul offensive, which should help offset budget shortfalls for the peshmerga. U.S. sources told Rudaw that aid could top $900 million for the year, and voices in Congress continue to support direct military assistance to the KRG, bypassing Baghdad. Deputy Prime Minister Qubad Talabani reiterated the need for more assistance at the Woodrow Wilson Center in Washington in mid-April. He claimed the KRG has a $100 million monthly shortfall in spending.

Dizayee is adamant that the United States and United Kingdom can play a positive role in encouraging Baghdad to come to a real agreement. The central issue, in the end, is the need to support the Kurdish economy as an integral part of the war on ISIS and shoulder the burden for the numerous refugees in Kurdish areas. The KRG’s precarious oil lifeline to Turkey is working for now, but the region needs more financial support so that it can function as well internally as it has on the battlefield.