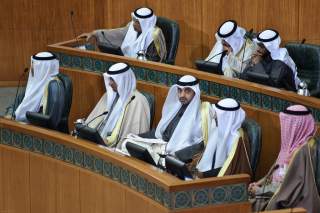 It doesn’t take a lot of votes to get elected to Kuwait’s National Assembly. In the smaller districts a couple thousand ballots will do. But the legislature really matters.

Only Bahrain has a similar elected body, but that Gulf state has destroyed any pretense of democracy with the ruthless repression, backed by neighboring Saudi Arabia, of the Shia majority by the Sunni monarchy. No one looks at Manama as an example of Arab liberality.

Even Kuwait’s reputation has suffered as the government sought to stifle opposition in the aftermath of the Arab Spring. However, the November 26 poll, which I observed, gave the opposition almost half of the National Assembly’s fifty members.

Moreover, many candidates denounced the government for having stripped critics of their citizenship, jailed opposition activists for criticizing the Emir and changed the election rules. Kuwait is not Saudi Arabia. This contest seemed to move the small emirate—the number of eligible voters wouldn’t fill one congressional district—back toward its more open past, though significant challenges remain.

For Americans, Kuwait’s elections are unusual in a number of ways. There are five districts which elect ten legislators each. Voters, however, can cast only one ballot—down from four as recently as 2012. The campaign can run at most sixty days; in this case the Emir dissolved the National Assembly on October 16 and set the election less than six weeks later.

Campaigning is intensely personal and tribal. In fact, the Emir reduced the number of votes cast to thwart vote-rolling by tribes, some of which had gained special influence. Women won the right to vote in 2005, though polling places are segregated by sex, and make up more than half of those registered. However, only one female candidate won this time.

The voting process itself is festive, with streets leading to the polls lined with supporters and tables filled with food, drinks and campaign propaganda and paraphernalia. Women voters offer the most variety because their dress varies from stylish Western to full Islamic covering. The visual contrast mirrors divisions in the society itself.

Kuwaitis remain overwhelmingly pro-American and remember being rescued during the Gulf War. Even younger Kuwaitis talk about their family’s experiences during the Iraqi invasion. However, while Western-style liberals are prominent and visible—and often work with foreign visitors—Kuwait remains a conservative society. Women hold professional positions and drive, but for a time universities were segregated. Religious liberty is protected, but Western-style evangelism is absent. For the most part, government allows people to choose how to live, but not all are happy with that degree of freedom.

Indeed, the country illustrates the oft-ignored tension between liberty and democracy. There are no parties in Kuwait, but in the new legislature those supporting the government are about sixteen, while 24 are thought to compose the opposition and the rest independent. However, the opposition is badly split, ranging from liberal to Islamist. They often cooperate on political reform but differ dramatically on social issues. That division helps explain the overwhelming reelection of the previous National Assembly speaker and narrow selection of the new deputy speaker, both of whom were backed by the government.

The Islamist block, made up of Salafists and members of the Muslim Brotherhood, accounts for about a fifth of the body’s members. That’s probably not enough to enact their distinctly anti-liberal agenda. However, the National Assembly election in February 2012, conducted amid charges of widespread corruption and undue government influence, yielded a very conservative, traditionalist opposition, which promptly began discussing measures to impose the death penalty on blasphemers, close Christian churches and impose a dress code. Thankfully, the unelected monarch said no. For instance, the Emir noted that the constitution protected religious liberty, hence no church burnings.

That poll and the following election were voided for technical reasons. The July 2013 contest, boycotted by the opposition, yielded a far friendlier majority for the government. But even it was unsympathetic to cutbacks, however modest, in Kuwait’s generous welfare state.

It’s an issue which officials have talked about whenever I visited over the last nearly two decades. And the issue has gained urgency with the dramatic drop in oil prices. In late November, before the vote, Information Minister Sheikh Salman Sabah Al-Salem Al-Homoud Al-Sabah told me that, “Kuwait is trying to move away from a welfare state to a state of responsibility with the participation of its citizens.” He acknowledged the political barriers to doing so, but argued that “we have to work towards creating awareness in the population to take more responsibility.”

Indeed, when convening the new National Assembly, the Emir spoke of “inevitable” cutbacks and sacrifices. However, a majority of the new members campaigned against reductions in the panoply of government subsidies and salaries available to Kuwaitis. Everyone wants reform, but few believe that giving up their benefits counts.

Yet this might not be the most divisive issue for the new session. The election disputes of 2012 and 2013 triggered criticism, boycotts and demonstrations against the government. Old leaders organized young followers. Islamists and liberals cooperated. Perhaps the most celebrated dissident was long-serving MP Musallam al-Barrak, a social conservative who became quite popular with the young. I’ve spoken with him several times over the years. He always was careful to separate his criticism of the government from that of the Emir, who is considered to be above politics. But last year al-Barrak was jailed for his criticisms of the monarch. He is not forgotten, however, and will be released next year.

One of the ideas broached by democracy advocates across the spectrum was creating a government accountable to the National Assembly rather than the monarchy. The degree of popular support for the idea was never easy to gauge, and as ever more of the Middle East has dissolved into conflict an increasing number of Kuwaitis appear to be more interested in stability. Indeed, liberal support for democracy is a serious risk: if such policy had been in place in February 2012, Kuwait might have proceeded to follow countries like Pakistan, Saudi Arabia and Iran, which execute blasphemers, ban churches and regulate dress. It is the monarchy which saved the nation from such policies. Still, younger Kuwaitis frustrated with the lack of economic opportunities may lose patience with a system that tends toward gridlock.

Kuwait receives little press in America, but is a genuine friend of the United States and has served as a logistical base for Washington’s military activities around the region. Yet what may be most impressive about Kuwait is that it has had an elected legislature for more than a half century. That, combined with a generally free press, makes Kuwait the freest country in the Gulf and, indeed, in the Middle East other than Israel (which is decidedly repressive toward Palestinians) and Lebanon (which has a malfunctioning confessional system).

Kuwait’s reputation has been tarnished of late, and the new National Assembly could help restore some gleam to Kuwait’s political system. The challenge is to make democracy and liberty allies, not antagonists. Kuwaitis have found that isn’t always easy. But doing so has become more important than ever.

Doug Bandow is a Senior Fellow at the Cato Institute. A former special assistant to President Ronald Reagan, he is the author of Foreign Follies: America’s New Global Empire (Xulon).