Why 'Leading from Behind' in the Middle East Is Not Enough 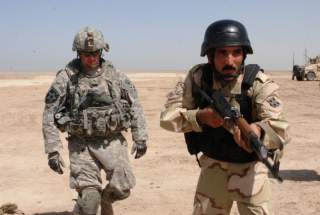 While the 2015 National Security Strategy states that the United States will safeguard its national interests through “strong and sustained American leadership,” an Obama adviser more accurately described the administration’s strategic approach as “leading from behind” that encourages regional partners to assume more of the security burden. This is particularly true in the Middle East, where the United States favors a smaller military footprint that relies more heavily on the use of drones, intelligence, cyber and special-operations forces.

After a decade of war and a weary public, President Obama ended U.S. combat operations in Iraq and Afghanistan, where the number of troops has been reduced from 180,000 in 2009 to less than 15,000 today. Declaring that the end of these conflicts provided a “moment of transition,” the administration conducted an extensive defense strategy review that determined the United States was “over-weighted” with military commitments in the Middle East and remained “underweighted” in other regions where it has a number of economic and security interests. As a result, in January 2012, the president announced his intention to strengthen the U.S. presence in the Asia-Pacific region.

Although this may be strategically prudent (especially in light of resource constraints), the so-called “rebalance” has fed the perception that the United States is retreating from the Middle East. Additionally, America’s regional partners have witnessed the administration’s slow and indecisive response during the 2011 Arab Awakening, Syria’s four-year-old civil war and Obama’s refusal to respond in accordance with his self-imposed “red line” when President Bashar al-Assad allegedly used chemical weapons against his own people, the ongoing P5+1 nuclear negotiations that could leave Iran as a threshold nuclear state and the International Energy Agency’s projection that the United States could become a net energy exporter by 2030.

The Carter Doctrine and Reagan Corollary announced America’s role as the guarantor of Middle East security; however, concerns about a U.S. withdrawal from this volatile region have called this into question and created a leadership void within the region. Consequently, the Middle East is moving from one crisis to the next without a coherent strategy and with no end in sight, leading UAE Ambassador to the United States Yousef Al Otaiba to lament, “The whole region around us is falling apart.” While this is perhaps hyperbolic, Kenneth Pollack and Ray Takeyh make a credible argument that “U.S. disengagement has not produced a more stable or secure Middle East.”

For example, consider the rise and expansion of the Islamic State of Iraq and Syria (ISIS) that former Secretary of Defense Chuck Hagel described as “beyond just a terrorist group…this is beyond anything that we’ve seen.” ISIS seized territory in both Syria and Iraq and its leader, Abu Bakr al-Baghdadi, announced the establishment of a self-described “caliphate” that effectively erased the border between those two countries. In response, the Obama administration formed an international coalition of over sixty countries with the objective to “degrade, and ultimately destroy” ISIS. Additionally, the United States has increased its security cooperation efforts to build the military capability of its partners in the region. Unfortunately, the results of the coalition’s efforts to date have been mixed, due in large part to the challenges associated with a smaller U.S. military presence.

Iraq’s army is in a state of disrepair, due to corruption and the lack of competent leadership following the withdrawal of U.S. forces in December 2011. Despite years of effort and tens of billions of dollars invested in training and equipping Iraqi security forces, they proved no match for ISIS last summer. Iraqi soldiers abandoned their posts in the face of the terror group’s seemingly relentless march across the country that resulted in the loss of key cities including Mosul, Tikrit and Fallujah. Although Iraqi forces, supported heavily by Shiite militia forces and U.S. airpower, were able to recapture Tikrit, the government faces significant challenges expanding its military operations to the north and west. Meanwhile, the Obama administration finds itself struggling to maintain influence in Iraq, as Iran has played a more direct role in fighting ISIS.

President Obama has consistently ruled out sending combat troops into Syria, opting instead to rely on airstrikes and undertake the slow and arduous process of recruiting, vetting, training and equipping “moderate” opposition forces to fight ISIS. While this minimizes the risk of U.S. casualties and “mission creep,” it also ensures that this conflict will continue and Assad will remain in power for the foreseeable future. As a result, some regional partners, like Turkey’s President Tayyip Erdogan, are frustrated and want the Obama administration take a more aggressive approach to remove the regime that is critical to defeating ISIS in Syria.

Yemen has been in a tailspin since Houthi militants began their attacks against President Abdu-Rabbu Mansour Hadi’s government last fall. The Houthis, Shiite Muslims who have long felt marginalized in the Sunni majority country, have seized control of the government and forced Hadi’s resignation, which has split the country and threatens the return to civil war and a wider regional conflict. The United States withdrew its remaining military personnel and significantly scaled back its intelligence presence in Yemen, which has hindered the ability to conduct counterterrorism operations against a resurgent al-Qaeda in the Arabian Peninsula (AQAP). The United States has conducted drone strikes against senior AQAP leaders and trained Yemeni forces to combat the terror group that poses a direct threat to the region, the international community and the homeland.

Despite criticism that President Obama prematurely hailed Yemen as a counterterrorism success, White House spokesman Josh Earnest countered that the administration “does continue to believe that a successful counterterrorism strategy is one that will build up the capacity of the central government to have local fighters on the ground to take the fight to extremists in their own country. That is a template that has succeeded in mitigating the threat that we face from extremists in places like Yemen.” In other words, despite the risks associated with the “Yemen model,” the Obama administration intends to continue its “leading from behind” approach that requires a smaller military presence in the Middle East and facilitates the rebalance to the Asia-Pacific region.

From Riyadh’s perspective, Saudi Arabia now faces an Iranian-supported threat on its border, in addition to Tehran’s growing influence in Lebanon, Iraq and Syria. In response, the kingdom assembled and is currently leading a multinational coalition that is conducting airstrikes (Operation Decisive Storm) in Yemen against the Houthi rebels. Saudi Arabia’s ambassador to the United States, Adel al-Jubeir, explained that the objective of the attacks is to “protect the legitimate [Hadi] government” in order to “open the door for a political process to resolve Yemen’s problems.” Secretary of Defense Ashton Carter supports the airstrikes and said that the United States is “assisting the Saudis to protect their own territory” by providing weapons, in addition to logistical and intelligence support for these operations. However, in a public display of the tensions between U.S. regional partners, Iraq’s Prime Minister Haider al-Abadi questioned the “logic” of the Saudi-led airstrikes and asked if it is “to build a regional power where they will intervene in any place they want? Is Iraq within their radar?” It is particularly noteworthy that Abadi made these comments during his recent visit to Washington that appeared to catch the administration by surprise and U.S. officials scrambled to distance themselves from his remarks.

Whether one agrees with Obama’s critics that his Middle East foreign policy is “naive” or “delusional,” there is no doubt that the administration is navigating a complex and uncertain security environment where the stakes could not be higher. For example, it remains to be seen whether a final nuclear deal with Iran will create a more stable region, or instead spark a nuclear arms race. Additionally, U.S. national interests have led the United States to work (albeit indirectly) with Iran to fight ISIS in Iraq, while simultaneously working to curtail Tehran’s ambitions in Syria and Yemen. In the midst of the widening Sunni-Shiite divide that threatens a regional sectarian war, U.S. partners are looking for credible leadership from Washington.

Peter Mansoor argues that “right now, we have an administration that’s engaged diplomatically, but because they’re taking off the table much of the military [functionally], no one believes them.” This lack of credibility has resulted in a power vacuum where regional and external state actors act without fear of serious consequences. For example, Russian president Vladimir Putin has rescinded Russia’s three-year-old ban that allows the $800 million sale of the S-300 air-defense missile system to Iran to proceed. Despite Russian foreign minister Sergei Lavrov’s reassurance that “The S-300 is exclusively a defensive weapon,” this sophisticated system provides a more robust deterrent against air attack that worries some countries in the region (especially Israel) that Iran will only increase its aggression as a result. The fact that the sale is occurring as the P5+1 nuclear talks are approaching a final agreement demonstrates Russia’s desire to increase its influence in the Middle East and Iran’s confidence as a regional power.