Why the Left was the Real Loser in the 2020 Election 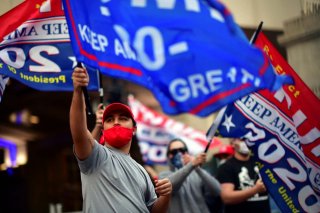 In politics, as in life, we should be careful what we wish for. If current trends hold and the presidential election results are not overturned by the judicial branch, then Joe Biden will be our next chief executive. My first reaction as this likelihood dawned was to post a message to my many Democratic friends on Facebook:

“If Joe Biden really has been elected president, it’s your turn to be embarrassed for the next four years.”

Every election represents both a planting and a harvest; a victorious harvest can contain the seeds of defeat, and vice versa. I previously noted that there were four possible scenarios for how this election would play out:

All four of these scenarios are within the realm of possibility, but as I noted numbers 2 and 3 are likeliest and in that order.

Voila. The likeliest of my two likely scenarios seems to have come to pass. And the second likeliest—if the initial results are reversed by recounts, judicial action or a combination of both—is the only alternative outcome.

For the moment, let us assume that the Democrats get their wish and Joe Biden—possibly with whispered prompting from his constant campaign companion, Dr. (or is it nurse?) Jill Biden—manages to make it successfully through the oath of office. What will the next four years hold for American politics?

To begin with, what will the political map look like on the day Biden would be sworn in? What happened lower down the ballot on election day has already given us some valuable clues. Even in deep blue states like California, most left-wing initiatives, resolutions and referendums failed while many conservative measures passed. This is indicative of the underlying mood of the electorate, quite aside from how it felt about the personally polarizing effect Donald Trump had on the presidential race. About the only nominally “liberal”  initiatives to enjoy widespread success were ones involved in reducing or eliminating restrictions on the use of and punishment for the possession of drugs. These were not so much left-wing victories as libertarian ones.

Simultaneously, even though leftist billionaires like Mike Bloomberg poured hundreds of millions of their dollars into state and local races across the country, the GOP maintained—and even expanded—its strong competitive advantage in state legislatures across the country where the electoral maps will be redrawn and will shape state and congressional politics for the next decade.

At the congressional level, where pre-election predictions by the mainstream media heralded strong gains for the Democrats, Nancy Pelosi will actually begin the next Congress with fewer Democrats and more Republicans to deal with in the House of Representatives. Meanwhile, on the Senate side, where the same left-wing billionaires who failed to tip state legislatures with their mega-million, out-of-state contributions tried to bankroll a Democratic takeover, Mitch McConnell will remain the leader of an essentially unchanged Republican majority.

All of these developments would be good news for an incoming Republican president, just as they are bad news for Biden. The ironic twist is that the legislative results probably leave the Republican Party even better positioned for the future under a Biden presidency than a Trump one.

The reason? The 2022 midterm elections are just two years away and halfway between now and the next presidential cycle. The midterm elections almost always prove punishing to the party in the White House. In 1966 they brought in a strong new freshman class of young, motivated Republican legislators and foreshadowed Richard Nixon’s presidential victory in 1968. In 1978 Ronald Reagan, campaigning across the country for many successful GOP congressional candidates, laid the groundwork for his own 1980 presidential nomination and election and GOP capture of the Senate. The Gingrich revolution during the Clinton years – the first time the GOP captured a congressional majority since a brief interval in the Eisenhower presidency – and the return of that GOP majority during Obama’s first midterms are two further examples.

Obama and Clinton were both personally popular with their party bases and were both young, clever and highly articulate. As such, both made it to second terms. But in the case of weak (e.g. Jimmy Carter), politically out-of-touch (e.g., the senior George Bush), or extremely polarizing and unpredictable incumbents (e.g., Trump), those weak midterms are often the beginning of the end for their presidencies.

The 2022 midterms could be just that for a Biden Administration, and could actually see the GOP strengthen its majority in the Senate and even capture the House in a way that would be highly unlikely if Trump, as a lame-duck president with consistently weak approval numbers was sitting in the White House instead of Joe Biden.

Looking ahead, it is no exaggeration to say that, as president, Joe Biden may be more of a gift to the Republican Party than to his fellow Democrats.

Even the Trump political legacy could potentially fare better. Donald Trump is both a man and a movement. The man has great personal strengths and equally great weaknesses. But his movement—his message—is an overwhelmingly positive one based on patriotism, optimism and an unapologetic commitment to America’s past, present and future greatness. Unlike most recent GOP presidential candidates, Trump went out of his way to share his message of hope and opportunity with the Black and Latino communities, where made significant electoral inroads. His commitment to restoring the integrity of our borders is one shared by most Americans of both parties, but it took him to bring it front and center. Perhaps most of all, his recruiting and nominating of so many sound, distinguished federal judges who respect the Constitution is a civic gift that will protect the rights of individual Americans for a generation to come.

With or without a second term for Donald Trump, the best aspects of his movement will continue to resonate with many if not most Americans. Indeed, the message may prove even more powerful after he has left the spotlight.