Why Mahmoud Abbas Is Embracing Israel 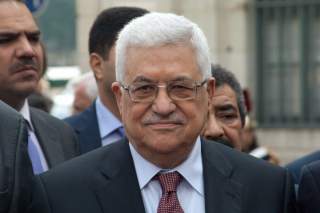 None of this is a signal that a new era has dawned. But there’s reason to believe that this is a convenient time for Abbas to embrace Israel.

Politics in recent days have been particularly rough within Palestine, even by its own standards. Early this month, the West Bank town of Nablus witnessed a raucous procession of thousands of people marching through its streets. The occasion was the funeral of a police officer named Ahmed Halawa. Halawa was accused of plotting the violent murder of two Palestinian police officers. He was beaten to death in police custody in what was seen to be the latest incident in weeks of violent clashes between Palestinian authorities and so-called “outlaw groups.”

Halawa’s death touched a nerve in the West Bank—a region held by Abbas’ Fatah, but now increasingly disenchanted with the President and his rule. Protesters have taken to streets in parts of the West Bank for months, demanding that Abbas step down. Speaking to the New York Times, Diana Buttu, a lawyer based in Ramallah, said, “[Abbas has] nothing to show after all these years, and so increasingly he’s turning inward … trying to suppress dissent.”

Palestine hasn’t seen national elections in a decade. Hamas scored a surprise victory in 2006, and Abbas has now been in power for nearly twelve years in what was originally to be a four-year term. But Abbas announced municipal elections across Palestine this year, scheduled for early this October. Many of his party colleagues are said to have goaded him into postponing the elections, fearing electoral losses to candidates aligned with the Hamas, especially in the current atmosphere of disillusion and disaffection.

Much to their relief, the Palestinian High Court this month postponed the elections indefinitely, following a lawyer’s complaint that elections were not being held in East Jerusalem—an area claimed by Israel which Palestinians want as part of their future state. But the Court’s order only seems to have exacerbated the fury in most places. One vegetable vendor in Gaza told Al-Monitor, “We were hoping the local elections would lead to legislative and presidential elections.”

With all this growing unrest, Abbas will be much too happy to divert international attention away from inside Palestine. And he knows that violent conflict with Israel will only make Hamas more popular at home. The alternative: embrace Israel. An Israel-Palestine thaw will likely be Abbas’ best shot at winning positive coverage in the international media and support from the West. Even better, a thaw would endear him to Netanyahu and possibly even win him Israeli support in consolidating power at home.

That wouldn’t be too bad an outcome for Israel either. Netanyahu knows that he would rather deal with a Palestine led by the more benign Mahmoud Abbas than a Palestine run by the militantly aggressive Hamas. Hence, perhaps, Netanyahu’s well-timed offer to Abbas to address the Knesset this month.

None of this might be the best outcome for the long-term resolution of the Palestinian problem. A two-state solution, which the Secretary General unequivocally advocated at the United Nations this month, looks increasingly distant. Palestine still lacks the makings of a modern nation state. The geographical disconnect between Gaza and the West Bank apart, Palestine’s democracy is clearly dysfunctional, and its people are forced to choose between a militant group and a President who inspires nothing but disenchantment after over ten years at the helm. The postponement of the latest elections would likely only perpetuate violent protests against the government, forcing Abbas to become increasingly oppressive—and his police force consequently more so.

For the foreseeable future at least, it looks like the conflict in Palestine won’t be between Israel and Palestine but between the Palestinians themselves.

Mohamed Zeeshan is a student of international affairs at Columbia University and a foreign affairs writer for The Diplomat, Swarajya, DailyO and HuffPost India.