Why Mexico Is More Important Than Ever for America 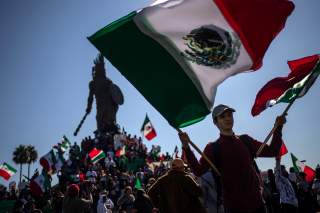 No other country affects the day to day lives of Americans more than Mexico does.

Mexico is the United States’ top trading partner and most important ally. Yet, ahead of the 2020 election, one can expect President Donald Trump to put Mexico in his crosshairs again as he did throughout his 2016 presidential run. If so, Trump and his defenders will use nativist rhetoric to stoke the anxiety and resentment of his base toward the growing interconnectedness of the world. And Mexico will again become a proxy, through immigration and trade, in the U.S. public debate. This, of course, is a wrong-headed tactic.

The United States and Mexico are bound to a shared cultural, economic, environmental, and demographic destiny. The most obvious example is the U.S. Latino population, which reached a record 59.9 million people in 2018, that’s 18 percent of the total U.S. population—60 percent (36.6 million) of the U.S. Latino population is of Mexican origin. Likewise, the U.S.-Mexico border region alone represents a combined population of approximately fifteen million people—if considered a stand-alone entity it would be one of the world’s largest economies.

Instead of taking advantage of the fact that the U.S. has a neighbor that also strives to achieve security, growth, and competitiveness, the Trump administration’s response has been to place this vital relationship at a delicate tipping point, where the United States either acknowledges and appreciates the real dynamics at the heart of the U.S.-Mexico relationship or creates substantial damages that will take years to rectify.

U.S.-Mexico relations have grown closer and friendlier within the last two decades through increasing trade flows, cross-border energy production, and environmental management, and most importantly, jointly combating the illicit flows of goods and people throughout the U.S.-Mexico border. But in the not-too-distant past, cooperation between the two neighbors was limited due to U.S. distrust of Mexican officials and Mexican sensitivity about U.S. involvement in Mexico’s domestic affairs.

There is no need for Trump and his cronies to push the United States and Mexico to revert to the days of noncooperation and distrust, which would be very harmful to U.S. national interests.

Particularly as Mexico’s commitment to implement and enforce the necessary labor and environmental laws is key for the passage of the United States-Mexico-Canada Agreement (USMCA) in the U.S. and the fact that Mexico has become an extended arm of U.S. immigration management at the U.S. Mexico border. Mexico has so far demonstrated a willingness to achieve and safeguard the same democratic, security, commercial, environmental, energy, health, and humanitarian values as the United States. And instead of overwhelming the willingness of our neighbor’s cooperation, we should embrace Mexico’s commitment and support its own efforts to improve Mexico’s future.

The United States should supplement Mexico’s efforts by creating an immigration system in the United States—along with an asylum and refugee system—that is fair, humane and that actually works; enhance the capacity of Mexico to provide asylum and host refugees; and advance a robust strategy, with programs that have been proven effective, toward reducing violence, combating corruption, strengthening the rule of law, decreasing femicide and other gender-based harms, addressing gang violence, protecting vulnerable populations, promoting sustainable economic development and climate change adaptation throughout Mexico and Central America.

Just as important, modernizing North American infrastructure can help reduce geographical disparities within Mexico. Foreign direct investment has been concentrated in the northern and central regions of Mexico where the cost of business in such markets is lower due to adequate transportation infrastructure.  The unreliability and poor quality of transportation infrastructure throughout Mexico have discouraged investment in remote areas of the country, areas that then lack economic opportunities and become sources of immigration to other parts of Mexico and the U.S.-Mexico border.

With improved border infrastructure, Mexico can take additional steps to amply connect its southern region to its northern border, and to its northern neighbor’s lucrative markets. With the help, knowledge, and expertise of the North American Development Bank (NADBank), such strategic transportation infrastructure investment in Mexico’s most rural and disconnected areas can help nourish local markets and avoid further economic dislocation by not emptying the labor force in said regions. Furthermore, improved transportation infrastructure that connects Mexico from its northern neighbor to its southern region has the potential of building a deeper problem-solving partnership.

Mexico is no longer a predominantly migrant-sending country, it is now one of return, transit, and destination migration for Central American, and extracontinental, migrants seeking safe passage and asylum.

Transportation infrastructure investments can be a cornerstone toward addressing our shared immigration challenge—eventually spilling over into the Northern Triangle countries of Central America to develop job opportunities for communities in the region, strengthen institutions to improve public safety and the rule of law, ensure government accountability, and provide additional access to international markets that will help build resilient communities.

Again, no other country affects the day to day lives of Americans more than Mexico does, and we should not let Trump’s actions distract us from this reality ahead of the 2020 presidential election.

Joel Martinez is the Mexico policy analyst for National Security and International Policy at the Center for American Progress.