Why Mike Gravel Launched a 'Doomed to Fail' Presidential Bid 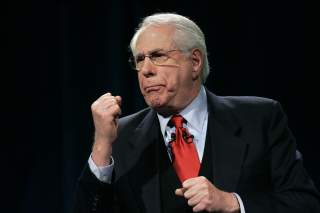 “We already have a successful campaign. We don't have to wait until the end,” said former Sen. Mike Gravel. “It’s not my campaign as my individual. It’s a campaign to acquaint people with how we would address and solve a lot of issues that plague society.”

Gravel is running an unorthodox presidential campaign in the already crowded 2020 Democratic field. The longtime anti-war activist and 2008 candidate says that his goal is not to become president, but to qualify for one of the televised primary debates before dropping out and endorsing the most like-minded candidate. The retired senator from Alaska announced last Friday that he had breached the sixty-five thousand unique donor threshold to appear on stage, but the Democratic National Committee excluded him from the list of qualifying candidates on Wednesday, based on his nonexistent poll numbers.

Gravel said that his campaign will “make an investigation whether or not the DNC turned my name into these various polls that were being taken,” and his staff has also floated the idea of an “alternate, unsanctioned round table of major candidates not included in the presidential debates.”

In an exclusive interview with the National Interest, Gravel explained how he’s going to war with his own party to end foreign wars—and to push through a longshot Constitutional reform, the “Legislature of the People,” that he thinks is the only way to stop the imperial presidency.

When asked what part of the world he thinks is the most dangerous, Gravel brusquely answered: “Washington, DC.”

“We sanction twenty nations. What right do we have to go into Venezuela and tell them what kind of government they should have?” he continued, claiming that U.S. economic sanctions are “war by other means” and responsible for “tens of thousands” of deaths. “And to what avail? Because we think they should have a different government?”

Gravel traced America’s hawkish posture to the conquest of northern Mexico in 1848 and the occupation of the Philippines in 1898, comparing it to “our presence in Afghanistan, in Vietnam, which really was of no benefit. None of our vital interests.”

“We want all of these eleven aircraft carriers to travel around the world to show our might,” Gravel complained. “When we talk about Russia, why would Russia want to invade Europe? They’re selling their gas and their oil to the European interests. Same thing with China. Why would China want to go to war with us or anybody else? They want to survive economically and prosper.”

While his talk of “vital interests” seems to put Gravel in the realist or “America First” camp, the former senator is motivated by the opposite—a belief in the power of international institutions. When asked about his foreign-policy values, he cited two of them: “[R]espect and ‘do unto others as you would have them do unto you.’ That's the first and foremost. Forgot the other approaches. Just do unto others as you would want them to do unto you.”

“I would take the initiative as president to remove all American presence from Iraq, from Libya, from Afghanistan. I would take the money that we have, that we’re spending on bases all over the world, and turn that over to the United Nations,” he told the National Interest. “Let them have the bases and the military capability to enforce international law, since obviously we talk about enforcing international law, but we don’t.”

“If there’s something wrong in another country, it’s the United Nations that should go in there and correct that. Not ourselves, because what we do is we play ‘winners and losers,’ so that if they’re supporting us, we don’t care how badly they operate,” Gravel continued. “You can just look at what’s going on in Saudi Arabia, what’s going on in the Emirates, what’s going on in Egypt. These are all our allies.”

One of Gravel’s most controversial foreign-policy stances may be his belief in total nuclear disarmament. Calling the U.S. nuclear arsenal “the pursuit of suicide” and America’s first strike posture “insanity,” Gravel endorsed the controversial scientific theory of nuclear winter. “We don't have to worry about retaliation. If somebody were to unleash their nuclear capability, then they would plunge the earth into darkness and destruction, and all of us would die.”

Gravel also downplayed the threat of a rising China. “We have to admit that there’s nobody who’s done what they’ve done in the history of civilization. That is to move 500 million people from poverty to middle class,” he said. “That has created more personal freedom than anything in human history.”

“First off, you've got to discern between economic power, which we abuse with our sanctions, and physical military power, to invade other countries. China is on the road to becoming the economic superpower, and not necessarily backed up by weapons,” he added. “It would be ideal if we joined China, and rather than spending our money on weapons, spent it like the Chinese are doing to build roads, and communications, and ports.”

In 2008, the then-Democratic candidate denounced the Democratic Party establishment for their aggressive foreign policy, changing his party registration to Libertarian. This year, Gravel’s campaign plans to air an attack ad excoriating Democratic frontrunner Joe Biden’s support for the Iraq War.

Gravel admitted that he doesn’t have any role in his campaign, which is run by the infamous Gravel Teens, beyond “making myself available for interviews.” But he endorsed the Gravel Teens’ decision to wage war on the Democratic establishment, blaming Democratic hawkishness on the tendency “to pull the Democratic Party to the right” since the Clinton era. But he’s not interested in working with Republicans, either, claiming that “the Republican Party has gone over the hill like lemmings…there's nobody on the other side of the aisle, except for a few exceptions, one or two exceptions.”

Gravel told the Daily Caller in 2011 that he might challenge then-President Barack Obama if he could raise $1 million. But he told the National Interest that his decision to run a longshot campaign this year was inspired by the Gravel Teens. “It was because of these young persons, David [Oks] and Henry [Williams] and others, who wanted to wage a presidential campaign using me as a candidate to inform people about the issues,” said Gravel, who is eighty-nine years old. “And I’m grateful to these young activists because . . . I had given up that I would see this in my lifetime.”

Several times throughout the interview, Gravel returned to his idea of a “Legislature of the People.” He supports a “constitutional amendment and federal statute” to guarantee the right of the people to hold national referendums, an idea he also calls the “National Initiative for Democracy.” He says that his plan will be explained in an upcoming book called Global Governance: The Failure of Representative Government, and a Solution.

“The reason why people are complacent is that they can’t do anything about it. Why fret about it? Just concentrate on your family, and your career, and being happy,” Gravel said, tying his proposal back to foreign policy. “But the threat [of war] is there, hanging over your head like the Sword of Damocles. So, the people can’t deal with it. That’s the reason why the people have to be empowered to make laws.”

Gravel, who is famous for reading the Pentagon Papers into the congressional record, also blamed the mainstream media for America’s appetite for war. But he said that the Internet can be a force for radical change.

“There’s a wonder of the present day, that we can get our sources wherever we want. And sometimes it’s factual and sometimes it’s not. But if we have experience and judgement to discern between the two, then that’s no particular problem,” he said, naming Consortium News and Amy Goodman of Democracy Now! as two of his favorite sources. “We have our biases. I have a bias towards world peace. I can’t help but detect in the mainstream media a bias for imperialism.”

But Gravel distinguished himself from these candidates with a call to reign in the power of the presidency itself. “Wonderful for Bernie Sanders, and I approve and support him for president, and Tulsi Gabbard, and Elizabeth Warren. They’re raising the issues. But these are just issues. What we need to do is to raise the ability of the people to make laws.”