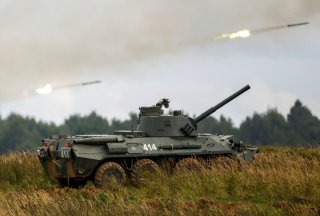 Has President Joe Biden become Russia’s most trusted foreign interlocutor? Donald Trump was widely portrayed as the Kremlin’s cat’s-paw by the Western media, but he proved to be erratic and unreliable in foreign affairs, careening almost daily from bombastic threats to emollient language. Enter Biden.

When it comes to Russia policy, Biden has sought to promote what might be called détente-lite with Moscow without using the dreaded word “reset.” The governing theory of the Biden administration—or, to put it more precisely, national security adviser Jake Sullivan—has been that China, not Russia, poses the gravest foreign policy challenge to America. In the Interim National Security Strategic Guidance, the White House mentioned China fifteen times, Russia five, and Ukraine not at all. Biden himself is working through the National Security Council (NSC) to attempt to craft a new policy towards Moscow. Biden, in other words, is the Decider.

No doubt the official rhetoric between the two sides remains fierce. Russian ambassador Anatoly Antonov warned in a recent Foreign Policy piece, “European security is at a crossroads.” Biden warned Putin that there would be a “heavy price to pay” should Moscow invade Ukraine, while Putin spoke of a potential “complete rupture” in relations. What’s more, on Sunday Biden intends to talk with Ukrainian President Volodymyr Zelensky. According to the White House, he will “reaffirm U.S. support for Ukraine’s sovereignty and territorial integrity.”

In some instances, however, the divide between Moscow and Washington may not be all that stark. Moscow’s concerns do not center on military supplies that the West is contemplating sending to Ukraine, including helicopters that could be diverted from Afghanistan or the prospect of bolstering the Ukrainian Navy. All these initiatives were already in the pipeline. Then there is the issue of medium-range missiles. In his Foreign Policy essay, Antonov wrote, “It is important that Washington joins the Russian unilateral moratorium on the deployment of ground-based intermediate-range missiles. Our proposals to withdraw exercise areas from the Russia-NATO contact line as well as those aimed at increasing the predictability of actions and reducing dangerous military activities require serious consideration.” But once again, there may be less than meets the eye. The blunt fact is that the Biden administration currently has no plans to emplace such missiles in Ukraine.

The real crux of the issue is Russia’s demand not to bring any new neighbors, including Ukraine and Georgia, into NATO. Biden says he is not publicly negotiating, but on the issue of NATO enlargement, there doesn’t seem to be much, if any, progress. The key question will be how central this issue is to Putin. If it is central, there doesn’t seem to be potential for a deal.

Or is there? Sometimes negotiations can take on a momentum of their own—and the risks of actually invading Ukraine are clear to Putin, who has never been a foreign policy gambler but always a shrewd opportunist. To some degree, Putin has already scored a victory by forcing the administration to accede to his demand for successive calls with Biden. Now three upcoming diplomatic parleys will take place. Biden’s goal will not be to propitiate Putin but to allay his vociferously expressed national security concerns.

One possible road ahead might center on an “Austrian solution” for Ukraine. After World War II, Austria, like Germany, was occupied by the four powers. But in May 1955, the Soviet Union signed the Austrian Independence Treaty guaranteeing its neutrality and withdrew its troops. Austria became a buffer state between East and West. Just as Austria officially sacrificed South Tyrol, so would Ukraine have to renounce its claims to Crimea. If Putin is willing to accede to Ukrainian neutrality rather than attempting to transform it into a puppet state or claim full suzerainty over it, then the Austrian model might serve as a possible solution to the vexed status of Ukraine.

All of this would come as a bitter pill to Ukraine itself. But neither Europe nor the United States appears to have much of an appetite for engaging in protracted economic and military standoff with Russia over Ukraine. The last thing that Biden needs is a Russian invasion of Ukraine that would drive up oil prices and add to the sense of siege surrounding his presidency. In coming weeks, he may well seek to score a diplomatic success abroad.