Why Mullah Omar's Death Is Bad for Afghanistan 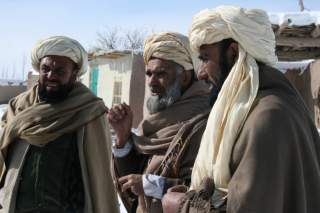 After years of rumors surrounding the status of Mullah Omar, the famously reclusive leader of the Afghan Taliban is confirmed dead. The official passing of the Amir al-Momineen, or “commander of the faithful,”—who has not been seen in public since 2001—may be viewed as a potential blow to the fourteen-year insurgency. However, a shock to the Taliban could produce a worse outcome for Afghanistan in the long-run. At stake is a nascent dialogue aimed at restarting peace talks, which offer the only real chance of producing a stable Afghanistan. Successful talks depend on a unified Taliban eventually coming to the negotiating table. A more likely scenario is a splintering of the group that would undermine any future meaningful steps toward political reconciliation. A devolution into violent competing factions may be just as serious of a challenge to the Afghan National Security Forces (ANSF) as the Taliban currently are.

Mullah Omar is the first and only leader the Afghan Taliban have had; as such, whoever is selected to replace him will have to quickly establish his legitimacy and attempt to keep the many factions of the group unified. It is important to note that the Taliban are not a monolithic group, but rather a coalition of various wings with different responsibilities and goals led by a leadership council, or shura (popularly known as the Quetta Shura, named after the city in Pakistan senior leaders are believed to have relocated to after the U.S. invasion in 2001).

Moreover, the degree of control Omar exerted over the operation of the movement has long been under debate. Omar became more of a figurehead for the Taliban than a tactician. Sitting atop the shura, he provided strategic vision and religious legitimacy for the Taliban’s violent campaign, but his death is unlikely to threaten the Taliban’s ability to carry out attacks. However, it may threaten the cohesion of the various groups and tribes allied under his leadership.

According to reports from senior Taliban commanders, long-time deputy Mullah Akhtar Mohammad Mansour has been elected by the leadership shura to take Mullah Omar’s place both atop the Quetta Shura and as Amir al-Momineen. His position atop the movement, however, is by no means secure. Mansour, the Taliban regime’s former aviation minister, who was named as Omar’s number two in 2010, has served as the Quetta Shura’s real day-to-day leader for some time now. Importantly, Mansour is viewed as something of a moderate, as well being open to talks, and could pave the way for a reconciliation that includes the Taliban in the new Afghan political system.

If Mullah Omar really has been dead for two years, it means Mansour has been passing along faked messages and directives. The Taliban’s media arm released a message attributed to Mullah Omar just three weeks ago, in which he criticized the so-called Islamic State’s expansion into Afghanistan and hinted at approval for peace talks. Mansour and others clearly understood the importance of Omar’s role as a religious leader was a crucial unifying force for the Taliban; they may not be able to overcome that loss. Beyond the lost symbolism, already wary or rebellious leaders may not respond well to being lied to for so long.

Regarding any peace talks, the worst-case scenario would be a serious fracturing of the Taliban movement. Mansour will face challenges from multiple angles, ranging from senior military commanders who are against a dialogue with the government, to other equally senior political members, to disenchanted factions who reject his leadership. There have been several reports over the past several months of frustrated commanders defecting from the Taliban, indicating that there is an ongoing internal power struggle over the future of the insurgency that may lead to a succession crisis. Earlier this week, the head of the Taliban’s political office in Qatar, Syed Mohammad Tayyab Agha, resigned over Mansour’s appointment. Mullah Omar’s family has reportedly rejected Mansour’s leadership, and there are conflicting reports that Omar’s twenty-something son, Mullah Yaqob, was assassinated last week to prevent him from challenging Mansour.

Perhaps most concerning is the defection of disaffected leaders to a growing Islamic State branch in Afghanistan, who have set up training camps and clashed with Taliban fighters. Confusion among low-level fighters and declining legitimacy of the Taliban leadership could lead to an increase in defections to the Islamic State. An already violent summer could become even more so, as groups ratchet up the violence in tit-for-tat escalation as they try outdo one another to win fighters and support. Coupled with a broader fracturing of the Taliban movement into various factions competing for control, this would almost certainly kill any chance of a meaningful reconciliation. Negotiating a real peace with a unified Taliban leadership will already be challenging; negotiating with several factions would be impossible.

In the long run, successful talks that produce a stable Afghanistan may be possible if Mansour is able to solidify his leadership and decides to build a consensus among senior commanders on pursuing political reconciliation. Two weeks ago, representatives from the Afghan government met with senior Taliban leaders in the first serious face-to-face meeting between the two sides. A second meeting was scheduled to take place, but further talks have been postponed after Mullah Omar’s death was announced. The timing is, at a minimum, suspicious.

Serious peace talks are still in infancy and unlikely to move anywhere fast. Importantly, the Taliban are having a very good summer militarily. They have mounted several large-scale assaults in provinces across the country, seizing scores of villages and districts while seriously contesting the ability of the ANSF to hold territory. At least in the short term, we are likely to see further spike in violence. The ANSF are already struggling to hold what they have, and the Taliban will likely press harder in their offensives across the country.

Mansour, attempting to consolidate control and appease local commanders, may have to back away from peace talks and increase in attacks across Afghanistan to prove his Taliban credentials. Fracturing and a loss of control at the top would produce a similarly negative result as individual commanders pursue their own agendas. The best the government in Kabul can do now is stay the course, trying to avoid major setbacks and ride out the violence.

The death of Mullah Omar could further open the door to peace talks, but it could easily close it too. Even worse, if Mansour is unable to maintain unity, the ANSF could find itself fighting off serious challenges from both the Taliban and the Islamic State. As the past few months have shown, the war in Afghanistan is far from over—and it could be about to get worse.

James West is a research associate at the Council on Foreign Relations.