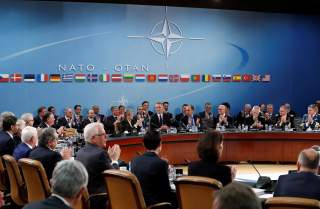 “The prime minister is accountable to this parliament, not to the whims of the U.S. president,” thundered UK opposition leader Jeremy Corbyn during a parliamentary debate immediately following the air strikes in Syria by the United States, Britain and France. “We clearly need a War Powers Act.” Corbyn was reacting to the fact that Prime Minister Theresa May had ordered the British air strikes without consulting Parliament. When David Cameron wanted to intervene in Syria in 2013, he did consult Parliament—and lost the vote. Such parliamentary powers pose a challenge to NATO, too. About one third of NATO member states require parliamentary approval for Article 5 interventions. While nobody would dispute the value of parliamentary democracy, such requirements could cause disastrous delays.

Germany is one of the member states requiring parliamentary approval of military actions. “Parliamentary decisionmaking power over Bundeswehr missions is important, and over the years it has proven to be the right way,” says Roderich Kiesewetter, the CDU/CSU Bundestag faction’s foreign-affairs spokesman. “But we also have to discuss how we can adjust the participation of the Bundestag to the constantly changing requirements for foreign deployments.” When the German Basic Law—Germany’s equivalent of a constitution—was introduced in 1949, the only kind of war Western decisionmakers could imagine was of course a war of territorial defense that may, by extension, take soldiers abroad. It was hardly surprising, then, that the founders of the Federal Republic considered parliamentary approval critical. In fact, since the end of the Cold War parliamentary approval has gained power within the alliance, as SACEUR now needs member states’ signoff for nearly every decision. During the Cold War, thanks to the process known as preauthorization, the SACEUR could make a number of decisions without having to wait for ambassadors to receive instructions from their capitals.

Today’s warfare scenarios, of course, look rather different. According to a 2016 report by the Rand Corporation, it would take Russian forces a maximum of sixty hours to reach the outskirts of Tallinn and Riga. NATO forces would, in other words, have to get to the Baltic states extremely quickly; while they may not get there before the Russians, they would at least need to arrive in time to prevent a Russian victory over the local forces and NATO’s “tripwire” forces.

In other words, every hour counts. NATO is working to improve its logistics and will, for example, establish a new logistics command in Germany. Together with the EU, it’s also addressing military mobility, improving infrastructure and reducing red tape that causes long delays when troops cross borders. Armed forces are, for their part, improving readiness. These efforts will save crucial time should NATO have to respond to an invasion.

Even a very efficient parliament will at least need several hours to convene and reach a decision—crucial time lost. And because SACEUR has so little preauthorized power, very little will happen until the parliaments have cast their votes. “The heterogeneity of parliamentary influence is a challenge that we jointly have to face,” says Kiesewetter. Alexander Vershbow, who was until 2016 NATO’s deputy secretary-general, agrees: “The parliamentary approval requirement is a very significant problem that could significantly complicate NATO’s capacity to deploy reinforcements to the eastern flank in time to counter Russian aggression.”

Here’s the dilemma: while the virtues of parliamentary democracy are indisputable, involving parliamentarians in matters of war presents painfully concrete challenges. When Cameron brought his plans for air strikes in Syria to parliament five years ago, the majority voted no for many different reasons—including the fact that the strikes would not sit well with some of their constituents. That’s a valid reason for an member of parliament, but the result was that the United States refrained from intervening. President Assad of Syria correctly understood the signal: he could violate President Obama’s red line and nothing would happen. The Syrian conflict deteriorated.

Last year Germany tried to introduce limits on parliamentary involvement in military deployments. “The reform would have enabled the government to commit to certain foreign missions in stable environments, and sending officers to international staffs would also not have required parliamentary approval,” notes Kiesewetter. “And it would have strengthened the powers of the Bundestag, since the government would have been required to regularly evaluate the missions and annually submit an extensive report about its military activities to the Bundestag.” But the vote failed.

Indeed, few parliamentarians anywhere would commit to a law that reduces their powers. That’s unfortunate, because with speedier political decisionmaking NATO troops would get to their destination faster. Also, speedy decisionmaking is also crucial to deterrence.

“As the EU, in coordination with NATO, tackles the mobility issue as one of the first 17 PESCO projects, it needs to find a solution that allows nations to strike a balance between military requirements and democratic oversight of the armed forces,” says Vershbow. “This could include parliamentary preauthorization for the deployment of national forces and the transit of other NATO/EU nations’ forces in specifically defined crisis scenarios. As is the case under the U.S. War Powers Resolution, there could be a requirement that the head of government report to the parliament within forty-eight hours of the commencement of military operations and seek authorization for continued action.”

Such post–authorization would strike a good balance between executive action and parliamentary powers, while giving the commanders crucial hours. Speed of decisionmaking will be on the agenda of NATO’s Brussels summit this July, and the Americans will push for reforms in the countries that maintain parliamentary approval. That won’t be popular. “The prime minister is accountable to this parliament, not to the whims of the U.S. president,” is an argument that virtually any non-U.S. parliamentarian would agree with. But when it comes to NATO, political speed is of the essence, and that means trusting that fellow member states won’t get the alliance drawn into ill-advised actions. Is that challenging? Sure, but it is less challenging than improving the alliance’s assembled equipment and infrastructure. An additional benefit: it requires no additional spending.

Elisabeth Braw is a senior associate fellow at the European Leadership Network.