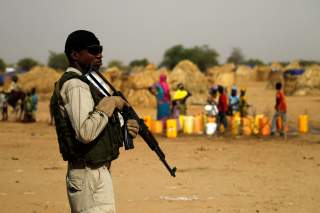 The tragic loss of four American fighters in Niger reminds one that the United States has learned little from the wars in Vietnam, Afghanistan and Iraq. It still believes that it can send its troops into a faraway country, in this case a particularly underdeveloped one, and that they will be able to stop ISIS from spreading. This is to be achieved not by the United States doing the fighting, but—the magic formula goes—by advising and training. The main problem with this idea is that all too often the locals would much rather have the Americans do the fighting. Thus, in Niger we learned from a Nigerien involved in the ambush that “the Americans had more sophisticated weapons and so we let them confront the enemy while we took cover.” The Guardian noted that “US special forces 'fought Niger ambush alone after local troops fled.’”

In Mosul less than one thousand ISIS insurgents got thirty thousand Iraqi troops to flee—this after they had been trained and advised for a decade and a half. One may say that these days the Iraqi army is finally doing better. Still, most of the fighting is done by Kurds and Iranian-led militias.

One major reason most local troops are so reluctant to fight is the high level of corruption in their government, including that of the military hierarchy. Generals take a cut from the salaries to be paid to the troops and from the funds set aside to purchase weapons and food. Their underlings take another cut and so do their subsidiaries. As a result, often very little is left for the foot soldiers. In Mali, a study on local troops who performed very poorly discovered that they were hungry and had little ammunition. The same is said about the troops that were routed in Iraq.

In response, the military contingent the United States is sending to these countries is supposed to not only train and advise the troops, but also to reform the local governments. The term of art is “capacity building.” That is, once the United States has built up local institutions and forces, they will be able to fight terrorism on their own. Advocates of this approach believe that  small investments from the United States could go a long way toward stabilization: “The U.S. can build on this fragile progress and make a significant contribution to its counterterrorism and humanitarian agendas in Africa with relatively modest effort,” according to Michael O’Hanlon, a leading military analyst at Brookings. Actually, I suggest that the opposite is the bitter sociological truth. Even very large investments—see the $700 billion the United States sunk into Afghanistan—will not do the trick. Capacity building, a form of nation-building, is a very slow, difficult and costly process and must be led by locals for it to have a chance to succeed. And when it does, it cannot be led by the military, which is trained to fight and kill and not to engage in institution building, let alone a civic society.

One may say that the U.S. military contingent in Niger is not small (as they are in scores of other countries where the U.S. military is “advising and training”). Their numbers are above eight hundred. However, most of these are drone drivers. They neither train, nor advise, nor engage in nation-building. They hunt down individual terrorists and kill them, trying to minimize civilian casualties in the process. (To be accurate, in Niger American drones just find the targets, hopefully valid ones; the French do the bombing). This is justified on the grounds that if we do not fight them there—we shall have to fight them here.

The record shows though that (a) while the United States has assassinated a large number of Al Qaeda and ISIS leaders—their ranks are increasing. Indeed, ISIS is spreading into more countries. Additionally, it is inspiring lone-wolf attacks in many parts of the world, including the United States. (b) As ISIS is losing territory in Syria and Iraq, it is working hard to increase their attacks in Europe and, it is feared, in the United States. (c) Also, one must worry that the United States makes two terrorists for each one it kills because of the anger caused by the killing of civilians. As Secretary of Defense Rumsfeld wondered: “Are we creating more terrorists than we’re killing?” (d) Last but not least, ISIS is an ideology that needs to be fought with—ideas, a campaign the United States has yet to get off the ground.

The United States cannot do much capacity building in nations such as Niger. The country’s military forces will fight ISIS once they have a firsthand experience of what that is like, in their own ways. The United States can help here and there with sharing intelligence and military supplies. However, the notion that the United States can stabilize and democratize scores of developing nations in Africa and Asia, and that this is an effective way to protect itself from terrorism, is a theory so often disproven one wonders how many Niger-like tragedies it would take before we get the message.

Amitai Etzioni is a university professor and professor of international relations at The George Washington University. He is the author of Foreign Policy: Thinking Outside the Box.