Why Nobody Wins in a War over North Korea 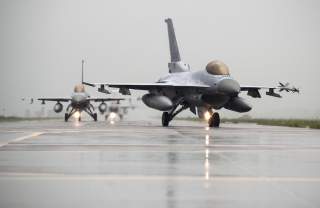 As the 2017 Korean crisis shows no signs of de-escalating, fears of the Korean War resuming continue to grow. On April 28, North Korea conducted a failed missile test only a day after President Donald Trump warned about the possibility of a “major, major conflict” on the peninsula over the North’s nuclear program. The test’s failure will likely harden DPRK dictator Kim Jong-un’s resolve to not only continue pursuing its nuclear agenda, but to also engage in provocative actions to deter or provoke an enemy response. It seems to be only a matter of time before an armed clash occurs between the United States, South Korea and North Korea. Maybe Japan would participate too.

Conventional wisdom dictates that the inevitable outcome of military conflict in the region is all-out war of the likes the world has not seen in many decades. The carnage and loss of life would be unimaginable, even under the best of assumptions, and push the U.S. military to its limits, to say nothing of the country’s allies. For over sixty years, it is this very fear that has deterred all participants from engaging in conduct perceived as increasing the risk of the outbreak of general war. This fear has been expressed countless time during the past three months in a variety of publications, more recently on the National Interest.

But just how likely is this scenario? As said before, a compelling case for this prevailing concern has been made time and again and has dominated thinking towards U.S. and South Korean policy towards North Korea. But it is also a case that, fortunately, has never been tested. Until it is tested, it is a question to which nobody knows the answer. Therefore, it is worth considering; is all-out war really the only outcome, or do intermediate possibilities exist?

It may not be a widely accepted position, but there are those who believe that it is.

In 2011, Daniel Wagner and Michael Doyle of Country Risk Solutions, a risk-management firm, presented an exclusive analysis of the Korean crisis via the Huffington Post. It offered four scenarios, two of which were variations of the classic general-war scenarios. The other two, however, offered a markedly different vision of events.

One scenario, referred to as “Attack and Parley,” saw Pyongyang conducting “significant but limited military action against the South,” followed by a suit for a peaceful settlement to the conflict. Such action would come either in response to U.S. or South Korea provocation, such as the often-considered but never-executed preemptive strike against North Korea’s nuclear facilities, or to solidify the regime’s domestic position. After the attack phase, the North would attempt to force the United States and South Korea into negotiations to demand concessions, lest they sought to exacerbate the conflict. According to Wagner and Doyle, this scenario is comparable to the Arab-Israeli conflict, in which both sides would engage in limited warfare to achieve both short-term and long-term political objectives, in between the larger, more destructive conflicts that have generated tremendous costs for all participants.

The logic behind this strategy is based on North Korea’s awareness of its lopsided vulnerability against the United States and South Korea in the event of conventional war. To avoid the “big fight” but still achieve political aims through violence, Pyongyang would conduct short-of-war operations so damaging that the United States and South Korea could not afford to abstain from responding while, hopefully, avoiding the more overwhelming retaliation that would demand tit-for-tat escalation. Such operations would encompass artillery bombardments, cross-border raids, unconventional warfare via special-operations forces, sea-lane interdiction, and even ballistic-missile attacks against U.S. and South Korean military installations, according to the study.

The likelihood of this scenario is buttressed by history. North Korea is responsible for a long list of low-level hostilities since 1953, incurring large numbers of U.S. and South Korean casualties. The DPRK’s track record shows, if it was to employ military force against its enemies, then it is more likely to operate within the low-to-mid-range of the spectrum of warfare. The 2010 sinking of South Korean warship ROKS Cheonam and the artillery bombardment of Yeonpyeong Island the following year are more extreme examples of the “limited war” approach employed by Pyongyang recently.

There are risks to this approach, however. North Korea would be hedging its bets on the fact the United States and South Korea have rarely, if ever, retaliated against North Korean provocation. But with the Trump administration taking, at least vocally, a harder-line stance against the DPRK, along with its demonstrated willingness in Syria and Afghanistan to employ military force, Kim Jong-un and his advisers cannot be certain of whether or not they are close to crossing American and South Korean “red lines.” More importantly, success would depend on the unwillingness of Washington and Seoul to escalate a conflict guaranteed to become increasingly destructive. Two decades of costly land wars have generated a significant level of war-weariness in the American public and played a role, however minor, in the election of Donald Trump. Likewise, the popularity of left-wing South Korean presidential candidate Moon Jae-in implies a wavering national willingness to take the tough stand against Pyongyang. Finally, the Congressional Research Service analysis also stresses the importance of China taking a mediating role in the crisis and encouraging all sides to de-escalate the situation.

This is a lot to bank on, however, and the consequences of betting wrong would be catastrophic for the Kim regime. Many Americans not only view North Korea as a threat, but also endorse coming to the aid of South Korea in the event of an attack. It would be safe to assume public support for U.S. military action against North Korea would be strong, at least until casualties begin to mount. With regards to China, there are indications the long-time North Korean benefactor is losing patience with its southern neighbor. Preemptive military action against North Korea remains an unlikely scenario and the historical record does not portend American or South Korean retaliation. There is always a risk of miscalculation, however, and it would be unwise for North Korea to assume there is no red line the United States and South Korea is not serious about backing it up.

The above entitled scenario provides a segue to the next, one Americans ought to be quite familiar with—a quagmire. It could begin any number of ways, including the “attack and parley” scenario, but it neither ends with a negotiated settlement, nor does it turn into the full-scale war the world has come to fear. Instead, it becomes a protracted limited war in which there is plenty of shooting, but neither side implements a strategy involving a full-blown effort to defeat or topple the enemy. As opposed to lasting weeks or months, this war would last years.

According to Wagner and Doyle, what makes this possibility unique is the lack of international cooperation. In such a scenario, there would be division with regards to who the aggressor is and what constitutes an appropriate response, or whether a response would be justified as all. There would be little, if any, international or even domestic consensus on whether military action is required. Decisionmaking would become a muddled affair, with leaders on both sides oftentimes unsure of what to do, knowing only they must do something. It is this very urge that will fuel and protract a shooting conflict that still never rises to the level of all-out general war.

Over time, the United States and South Korea, with little help from the international community, exchange blows with North Korea. Artillery is fired from both sides of the DMZ, planes are shot down and naval clashes occur in the waters surrounding the peninsula. Yet, despite all the fighting, the United States, specifically, is unclear as to how committed they ought to be to the conflict. Like President Lyndon Johnson’s policy of escalation during the Vietnam War, reinforcements would be deployed to Korea over a period of time, which would allow North Korea to better adjust itself to the enemy’s moves.

Regardless of initial reception, political leaders and the public would come to question America’s involvement. While casualties may remain relatively low in the short run, they will certainly build up over time. Combined with the indecisive nature of the conflict, public opinion would favor de-escalation, due in part to fears of sparking a larger war that could lead to superpower confrontation. If the United States elects to continue pursuing the war, it would probably limit operations to defending South Korea and conduct no ground operations north of the DMZ, according to the Congressional Research Service report. This, of course, would constitute an open-ended commitment to the war with no end in sight, like America’s experiences in Vietnam, Afghanistan and Iraq.

Absent outside support, however, North Korea would eventually succumb to the pressure. Having squandered its only chance of success, which is through surprise and invasion, it is instead trapped in a conflict that it cannot win in the long run. Here, matters would become exceedingly dangerous. Persistent attacks from the outside plus internal conflicts sure to occur would coalesce to threaten a collapse of the regime or, worse, the government. While this seems like a favorable outcome, the war would have ravaged North Korea’s already fragile economy, leading to a humanitarian disaster of tremendous proportions. South Korea would have also been drastically affected by years of war and would be ill-prepared for reunification. Regime collapse in the North would cause the emergence of either a cooperative or hostile ruling bloc in Pyongyang; the latter would prolong and/or escalate an already lengthy war. Government collapse would lead to total anarchy, with the country splintering into multiple factions, all struggling for control. The DPRK’s military arsenal, including its weapons of mass destruction, would be up for grabs, and a bloody civil war could ensue. Superpower confrontation between the United States, China and even Russia would become inevitable, as all three countries would seek to dictate what becomes of Korea in the aftermath.