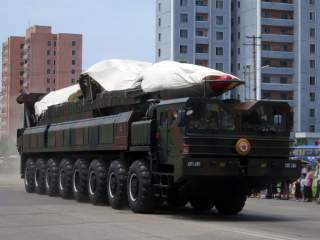 North Korea seems obsessed with building missiles that can threaten the U.S. homeland—and showing off its developments to the world. But the bigger story seems simple: why are we still so shocked?

To be clear, anytime a rogue regime does something like displaying increasingly advanced long-range missiles we should be concerned. And North Korea is the most rogue of regimes out there. It has killed, according to some reports, over one million people in its gulags, has large sections of its population in prison camps—one camp is three times the size of Washington DC—and can’t even feed its own people most of the time.

But for North Korea, provocations are nothing new. Missile launches seem routine. Nuclear-weapons tests are not exactly unexpected.

The real question we should be asking is: why is Pyongyang building such weapons when it has an economy the size of Laos and has so many internal problems?

North Korea has studied history and doesn’t like its long-term prospects for survival. Deep down, its leadership, Kim Jong-un to be exact, knows that the United States, South Korea and Japan aren’t exactly cheering for its survival. It fears that one day Washington will do what it did to Afghanistan, Iraq and Libya—regime change. So Pyongyang has only one clear path to guarantee its survival: building up its nuclear arsenal while making sure it can someday soon hit the U.S. homeland with an atomic warhead.

Let’s step back for a second and put the North Korea problem in terms everyone can relate to—well, at least if you like gangster movies, like me. As I have said in the past, Kim Jong-un, the leader of the so-called hermit kingdom, is more Michael Corleone than a world leader:

You see, Michael Corleone had a problem; to put it more specifically, his mob family, the Corleones, had a problem. They were constantly fighting for survival in a world where there was no overall control of the various mob families and factions. All the big mafia families, over the course of three epic movies spanning decades, battled for power. No action was out of bounds. No amount of killing or bloodshed was over the top. Michael Corleone would kill his own brother, his brother-in-law, former allies—anyone who stood in the way of ensuring that he was in power and he survived.

Does any of this sound familiar? Again, from my piece in Rare a few months back:

Now to be fair to the Corleones and the whole “Godfather” saga, I am simplifying a little here. But the point remains. Kim is doing what he feels he must do to survive, and that means doing things that Western democracies—or most nation states, for that matter—would never do, at least not out in the open. And that makes a man like Kim very dangerous.

This explains why North Korea is building all sorts of nasty weapon systems when its country is one of the poorest on planet Earth. The Corleone’s had Luca Brasi. Pyongyang has nuclear tipped missiles, chemical and biological weapons, special forces, massive pieces of artillery pointed at Seoul, and cyber capabilities that most analysts consider robust.

If he feels he is boxed in, if South Korea or its big American allies were to try to throw him out of power, Kim just might use those terrible weapons he is constantly developing.

How Trump Should Respond:

What does one do when dealing with a country that has seemingly taken its security strategy from the mob? The good news is that the Trump administration does have some options. First, the Corleones, and North Korea, respect power and can be deterred. President Trump must fast-track increased missile-defense measures, specifically the THAAD missile-defense system to Japan, and work hard to impress upon the new South Korean government when it takes office that THAAD should remain there as well.

Second, the Trump administration should consider secondary sanctions—sanctions that would target any entity who would dare sell or help North Korea with its weapons of mass destruction programs. The administration should declare that if you aid North Korea in any illegal way you won’t be allowed to profit from it; you will be made an international outcast. Washington should target any North Korean front company, any Chinese company, or any entity that is helping Pyongyang evade UN Security Council sanctions.

Finally, while it might not be popular, it is past time to make a concerted effort to talk to North Korea. Let there be no doubt: this is the moral equivalent of negotiating with Lucifer, and there is little guarantee they will keep their word on anything. But at the same time, Washington would be wise to develop some sort of contacts with Pyongyang, so if a crisis does occur, we have a way to potentially talk our way out of it or at least clearly convey our intentions. That is a course of action even Michael Corleone would approve of.