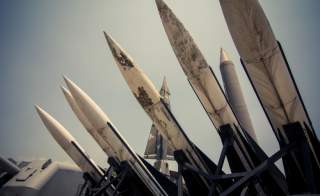 It’s a situation that has played out all too often. North Korea detonates a nuclear bomb. Washington responds by calling for stronger sanctions. The trite repetitiveness of the exchange makes one question whether it even qualifies as “breaking news” any more.

But this time, things are different. North Korea’s latest nuclear test on September 9 was reportedly more powerful than the detonation of the Hiroshima bomb. It also came with a chilling statement from the regime’s state news agency, to the effect that the DPRK has successfully miniaturized a nuclear weapon into a missile warhead. If this is true, then Pyongyang has completed its long and tumultuous path to nuclear missile development.

To make matters worse, the North’s nuclear test was preceded by two other worrying provocations. On August 24, the DPRK successfully launched a submarine-launched ballistic missile (SLBM) with a potential range of 1,000 kilometers, making it capable of striking South Korea, Japan, and American bases in the region. Just days later, on September 5, North Korea fired three new ground-based ballistic missiles (GBLMs) into the Sea of Japan – with at least one equipped with technology designed to penetrate missile defense systems like the Terminal High-Altitude Area Defense (THAAD) that the U.S. plans to deploy in the region.

Together, these episodes represent a three-pronged demonstration of defiance from the DPRK. Yet, at least so far, they have elicited only a weak response from Washington and Seoul, which have merely called for more sanctions and pledged to redouble defense cooperation.

The growing threat from the North Korean regime suggests that the United States can no longer afford to continue the policy of “strategic patience” that has come to characterize the Obama administration’s approach to the issue. Rather, Washington should respond with a three-part plan of its own – one designed not only to deter future North Korean aggression, but also to spur other regional states into action.

First, the U.S. should strengthen the trilateral military intelligence-sharing pact it signed with Japan and South Korea back in December of 2014. That agreement currently covers only North Korean missile activity; historic tensions between Seoul and Tokyo prevented the parties from signing a more comprehensive pact. But with Japan-ROK relations thawing and the North Korean threat increasing, the trilateral relationship is primed for greater interaction – and the 2014 accord is ripe for expansion.

Second, Washington should proactively seek to bolster South Korea defensive and offensive missile capabilities. With the deployment of THAAD in the near future, South Korea will possess an increasingly robust, multi-tiered missile defense. But given the sheer size of North Korea’s arsenal and the significant advances it has made in missile technology to date, THAAD alone is not enough. In addition to strengthening South Korean defense, Washington should consult with Seoul about easing restrictions on the latter’s offensive ballistic missile capabilities as a deterrent against DPRK aggression.

Currently, South Korea’s ballistic missiles are limited to a range of 800 kilometers and a payload of 500 kilograms (with more weight permitted at shorter ranges). Considering that the majority of North Korean missile facilities are concentrated in the country’s northern regions, these regulations may hamper South Korea’s ability to neutralize a North Korean missile threat in the event of hostilities. Beefing up Seoul’s offensive potential, then, would send a concrete signal to Pyongyang that the U.S. is committed both to South Korea’s defense and to its victory if a conflict breaks out.

The third step is a highly controversial one: reopening negotiations with South Korea over the redeployment of U.S. tactical nuclear weapons. After five progressively more powerful nuclear tests from its northern neighbor, Seoul has grown wary of the devolving situation on the peninsula. As a result, although South Korea remains a non-nuclear nation, many officials in the ruling Saenuri Party have called for the return of U.S. tactical nuclear weapons, which were withdrawn by the Bush I administration in 1991, whereas others go as far as advocating that the country develop nuclear weapons of its own. For now, violating the Nuclear Non-Proliferation Treaty and thereby jeopardizing ties with Washington is not on Seoul’s agenda. But without meaningful constraints on North Korea, the ROK may be further tempted to embark on an indigenous nuclear weapons program, with potentially destabilizing effects on the region. Preventing this possibility by reassuring South Korea should make the topic of tactical nukes – previously taboo – a real consideration for policymakers in Washington.

Just as importantly, such a move would send a concrete signal to China, North Korea’s most prominent political ally. For years, Beijing has opted not to take a decisive stance on North Korean aggression, preferring political incrementalism over resolute action. Reopening discussions about tactical nuclear weapons on the Korean peninsula would provide concrete proof to Beijing about just how seriously Washington is taking the North Korean threat – and may prompt a more constructive approach from China in curbing North Korea’s nuclear menace.

Whatever the specifics, it is clear that the U.S. needs a new strategy to confront North Korean provocations. The DPRK’s increasingly belligerent behavior – and its growing strategic capabilities – suggests that passivity is no longer an option. Washington needs a plan to push back against Pyongyang, and to reassure its regional allies that they are protected against North Korean aggression. And it needs one soon.

Alexander Kim is a researcher at the American Foreign Policy Council in Washington, DC.