Why Not Apply the Pakistan Precedent and Suspend Military Assistance to Lebanon? 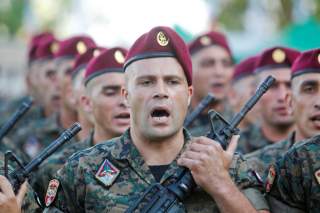 The administration’s decision to suspend military assistance to Pakistan is a bold move that may have detrimental consequences for the U.S.-led effort in Afghanistan. Though uncertain whether it will change Pakistan’s behavior, it sends a strong message that U.S. military assistance is not unconditional.

This message is very pertinent to the government in Beirut, which accommodates a status quo that serves the Iranian interests in Lebanon. The U.S. military assistance to Lebanon affords a measure of respectability to the duplicity of Beirut and undermines the cohesiveness of the administration’s counter-Iran strategy in the region.

Lebanon has become the fifth largest recipient of U.S. security assistance, having received over $1.4 billion since 2005. Recently, the United States has provided the Lebanese Armed Forces (LAF) with self-propelled 155 millimeter artillery pieces, armed Cessna aircrafts, armed HUMVEES and heavy machine guns. Given the budget cuts proposed by the Trump administration that zero out the foreign-military financing for Lebanon from the budget of the State Department, the present-day assistance is coming from Pentagon funds.

The U.S. security assistance to Lebanon has aspired to promote three main goals: to bolster Lebanon’s ability to safeguard its border with Syria; to promote the LAF as the sole defender of Lebanon and to weaken Hezbollah; and, to support the Lebanese effort to enforce United Security Resolution 1701. All of these goals have been muffed along the way.

Bolstering Lebanon’s Ability to Defend Its Border with Syria

With the outbreak of the civil war in Syria, countering the spread of ISIS and other extremist elements into Lebanon, become a primary U.S. interest. Accordingly, enhanced U.S. military assistance to bolster the LAF’s border protection and internal security capabilities were provided.

However, the severity of the actual threat to Lebanon from ISIS in Syria was less acute than thought. In reality, the U.S. border security assistance facilitated LAF and Hezbollah cooperation in the Battle of Arsal and a subsequent division of labor in which the LAF protected Hezbollah’s rear freeing its forces for the campaign in Syria.

The LAF’s control of the border with Syria is also highly selective. The transfer of Iranian sent weapons and equipment to Hezbollah goes on unabated by the LAF over the border, in direct conflict with U.S. interests in Lebanon. In spite of repeated Israeli successes in targeting weapon transfers by Iran through Syria to Lebanon, Hezbollah has succeeded in transferring over the border some advanced weapons systems, including accurate surface-to-surface missiles, SA-22 anti-aircraft missiles, Yakhont anti-ship cruise missiles and armed drones. Just recently, Israel’s army intelligence chief revealed that Iran is setting up an arms production factory for Hezbollah in Lebanon—without any LAF interdiction or preventive action.

Promoting the LAF as the Sole Defender of Lebanon

Following the withdrawal of Syrian troops in 2005, the U.S. security assistance to Lebanon became grounded in the desire to build the LAF’s capabilities and capacities so that it could become the sole legitimate guarantor of internal and external security. This goal accords with the United Nations Security Council Resolution (UNSCR) 1701, that ended the Second Lebanese War of 2006 with Israel, and which required the disarmament of all armed militia groups in Lebanon.

This long-standing U.S. position was recently reiterated in the joint statement that was issued at the conclusion of President Trump’s May 2017 visit to Saudi Arabia. The statement stressed “the importance of supporting the Lebanese state in enforcing its sovereignty on all of its territory, disarm terrorist organizations such as Hezbollah, and bring all weapons under the legitimate supervision of the Lebanese army.”

However, the president of Lebanon, Michel Aoun, who is aligned with the March 8 Alliance backed by Hezbollah and Iran, refutes this goal and instead legitimizes Hezbollah’s military standing in Lebanon. In February 2017, he stated that “Hezbollah’s weapons do not contradict the national project” and that Hezbollah is a principal element of Lebanon’s defense and he subsequently rejected the U.S.-Saudi statement.

In reality, given its sectarian makeup and the political domination of Hezbollah over the Lebanese government, the LAF will by no means militarily confront Hezbollah. In fact, the spillover from the conflict in Syria has made the LAF even more dependent on Hezbollah for the preservation of internal and external security.

There is negligible chance that the U.S. security assistance, as it stands, can advance the goal of turning the LAF into the sole defender of Lebanon. This goal has in practice been all but written off, even by Hezbollah’s domestic and regional opponents. Given this reality, Saudi Arabia, the one-time sponsor of the March 14 anti-Hezbollah coalition, retracted on its pledge of $4 billion in military support for Lebanon.

Prevent the Renewal of Armed Conflict between Hezbollah and Israel

Since 2006, Hezbollah has engaged in a massive arms buildup dispersed throughout all of Lebanon, including in South Lebanon. Under the acquiescence of Beirut, Hezbollah has nullified the terms of UNSCR 1701 for the establishment between the border with Israel (the Blue Line) and the Litani River “of an area free of any armed personnel, assets, and weapons other than those of the Government of Lebanon and of UNIFIL.” It has added instability in this volatile area by heavily weaponizing southern Lebanon and constructing military infrastructure there, especially in urban areas.

The ongoing military and intelligence cooperation between the LAF and Hezbollah extend into southern Lebanon. This has raised concerns in Israel that in the event of a future war, the LAF may take on an auxiliary military role alongside Hezbollah. This combined with the legitimacy that Beirut has bestowed on Hezbollah as a defender of Lebanon has led some in Israel to warn that in the event of a future military confrontation, force would be used not only against Hezbollah but also against Lebanon itself, including against the LAF.

As the United States evaluates the merits and the faults of its continued security assistance to Lebanon, it is clear that the government of Lebanon is actively undermining the LAF’s position as the sole legitimate defender of Lebanon and deliberately refrains from exercising its sovereignty over southern Lebanon.

Islamabad’s failure to take “decisive action” against militant groups that are destabilizing the region and targeting U.S. personnel was cited by the Trump administration as the justification for suspending most of the American security assistance to Pakistan.

The United States has much more to lose in Pakistan than in Lebanon. Pakistan could retaliate by closing the supply lines for material into Afghanistan and/or strengthening its relations with China. Even so, the administration has chosen to press Pakistan to stop its destabilizing regional role.

The American step will probably fail to significantly change Pakistan’s behavior because of its perception of regional realities. However, neither would continuing with the military assistance have changed Islamabad’s behavior. Rather, it represents an attempt to send a clear message that partnership with the United States is not unconditional and it is unacceptable to receive aid and then work against U.S. regional interests. This type of accountability is a standard that should also be applied to Lebanon.

As with Pakistan, suspending U.S. military assistance to Lebanon will not cause Beirut to significantly change its policies given Hezbollah’s ability to co-opt Lebanon into serving Iran’s political and military goals. But neither will it provoke major instability in Lebanon or a reorientation towards an overt alliance either with Iran or Russia. What it would do is to underscore that Beirut’s duplicity, that undermines America’s regional policy, will not be supported with U.S. resources.

Shimon Arad is a retired colonel from the Israeli Defense Forces (IDF). His last position (2011–2016), was Head of the Strategic Planning Unit in the Political-Military and Policy Bureau of the Israeli Ministry of Defense ([email protected]).