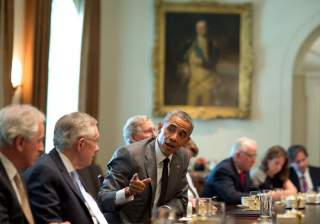 There was a telling moment in the State of the Union address.

President Obama had just finished paying homage to the 2004 Democratic convention speech that made him a national sensation. “You know, just over a decade ago, I gave a speech in Boston where I said there wasn’t a liberal America, or a conservative America; a black America or a white America–-but a United States of America," he said.

Obama acknowledged he had failed to deliver the different kind of politics he had promised back then, partly due to his own flaws. But he urged the American people not to give in to cynicism, that it was still possible to appeal to our better angels.

Then Obama noted he had "no more campaigns to run." Some Republicans applauded sarcastically. Then the president couldn't resist, ad libbing, "I know, because I won both of them."

(Recommended: The 5 Worst U.S. Presidents of All Time)

Sure, on some level the applauding Republicans had it coming. But Obama has always talked in the abstract about transcending partisan conflict and pettiness. He has just never been able to do it.

The jab at the party that was unable to beat him in two consecutive presidential elections was just the most obvious example.

That didn't stop the president from dismissing debates about immigration that are going on right now as the debates of the past. It didn't stop him from suggesting that some of his opponents might be the equivalent of poll taxers. Ronald Reagan and George W. Bush signed into law the last two extensions of the Voting Rights Act.

Obama has always had a masterful way of framing issues as if he is being gracious to the other side, while demanding agreement with his own position. Example: "We still may not agree on a woman’s right to choose, but surely we can agree it’s a good thing that teen pregnancies and abortions are nearing all-time lows, and that every woman should have access to the health care she needs."

Translation: you are free to disagree with me on the broad legality of abortion, which is unlikely to change anytime soon, but you must surrender on the issues actually in play, like abortion coverage mandated or funded by the government.

Or consider the fact that Obama has not reacted to electoral setbacks, like the 2010 and 2014 midterm elections, with a Bill Clinton–like feint to the center. Clinton had been rebuked by the electorate for being too liberal once before 1994, when he lost a reelection race for governor of Arkansas. Obama had never had that experience in Illinois.

More importantly, Obama never wanted to be a Clinton-style Democrat. He didn't want to triangulate. When advised to cool it with Obamacare, he said, "I wasn't sent here to do school uniforms."

In some ways, that's laudable. But it does sit uneasily with the president's stated desire to bridge the partisan divide. You can't govern like Franklin D. Roosevelt or Lyndon B. Johnson in something closer to a 50-50 country.

When dealing with congressional Republicans, Obama seems dejected and disinterested. When fighting them, he seems to have an extra spring in his step. That's been evident since he decided to take the fight to Congress, pledging to use executive authority and the bully pulpit to fight for his priorities.

There's a place for fighters in politics. That's just not the guy we were promised in the red states, blue states speech.

No matter how convinced Obama is of the rightness of his ideas, there are still two houses of Congress. Republicans should know. They won both of them.