Why Obama Needs a Strategy for Saving Jordan 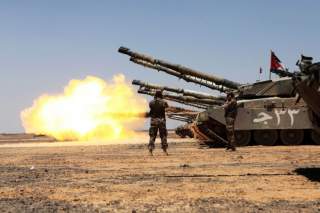 President Obama’s recent press conference sparked a firestorm of concern over the state of his strategy for dealing with ISIS. But ISIS isn’t the only Middle East challenge deserving some well-thought-out “strategery.” The administration also needs to craft a solid, sustainable plan for supporting the people of Jordan.

On the surface, the fate of Jordan may not appear to be of vital interest to the United States. But American strategists would be unwise to be indifferent to the country’s fate. Jordan is a “keystone.” It sits between nations whose futures are vitally important to protecting U.S. interests in the region.

Yes, the United States must deal effectively with today’s crises in the Middle East: the warfare and terrorism, the humanitarian challenges, the political instability and sectarian conflict. But the key to bringing long-term peace and prosperity to the region is to advance economic freedom in the region within the context of a constructive civil society.

Jordan has long struggled to be a regional leader in the march to sustainable development. It is in the U.S. interest to help the people of Jordan succeed and become a catalyst for progress in the region.

Long before the Syrian Civil War or ISIS became trending topics on Twitter, a 2008 study from the U.S. Army War College rightly pegged the role Jordan plays in regional geopolitics and its outsized importance for a small country of limited means.

To the administration’s credit, since the start of the Syrian Civil War, the United States has amped up engagement with Amman. Last year, Defense Secretary Hagel traveled to Jordan to visit two of its most influential military leaders: Lieutenant General Prince Faisal bin Al Hussein and General Mashal al-Zaben. The personal outreach was a smart move. So too was the secretary’s public statement, in which he reaffirmed the importance of the strategic relationship. Hagel also announced he was extending the U.S. military deployment to Jordan that was engaged in joint contingency planning.

All this attention is well warranted. Even before the ISIS invasion of Iraq, the Syrian Civil War was laying a tremendous burden on Jordan. The country’s population has swollen to about 6.5 million, but only half of them are citizens. The other half are refugees. Most are Palestinian, but more than 600,000 refugees are Syrian. These individuals entered primarily via Jordan’s northernmost border, but have now dispersed to other parts of the country.

Not all of the stress comes from the north. Jordanians have close ties with the Palestinian people. The conflict in Gaza adds another wild card to volatile domestic attitudes towards events in the region.

Further, Jordan has an established wing of the Muslim Brotherhood, which the government allows to engage in some political activity. In August, the Brotherhood staged a massive rally in support of Hamas. Yet, while not repressing the group, the government seeks to keep it on a “short leash,” seeing the organization as a destabilizing factor if allowed to act unrestrained.

There is also no question that Jordan is well within the ISIS area of interest. The ultra-orthodox Salafists, an important faction of Jordanian Islamists, have openly debated whether it is appropriate to declare support for ISIS. Hundreds of Jordanian “foreign fighters” joined the ranks of extremist groups fighting in Syria and Iraq. Wikistrat, an online consultancy that employs a crowd-sourced planning methodology, has outlined four credible scenarios that ISIS could use to threaten Jordan.

For months now, the Jordanian government has been signaling its concern over a direct threat from ISIS. In June, the government dispatched additional troops to the border on reports that rebels had seized Iraqi facilities at the crossing point of Treibel. In August, Jordanian security forces killed two extremists and captured five others attempting to infiltrate across the border, the latest of several incidents that have occurred in recent months. Amid these mounting security concerns, Jordan is struggling with its political- and economic-reform agenda. King Abdullah II is consolidating power. Several new amendments have been floated that, if adopted, would reverse the power-reducing measures implemented after the Arab Spring. The political-reform train appears to have stopped.

Meanwhile, disrupted trade flows from Syria, as well as the immense refugee burden have severely strained the economy. Last year, Jordan’s score in the international Index of Economic Freedom published by The Heritage Foundation and The Wall Street Journal declined. It is likely to drop again in the next Index. “In March,” according to Anthony Kim, one of the Index editors, “King Abdullah II asked his government to draw up a long-term blueprint for economic development that will, among other things, boost the country's competitiveness, productivity and overall self-reliance.” Yet, the domestic economic reforms are controversial and have added tensions.

Economic support in conjunction with a serious reform agenda are a formula for success, as long as Jordan’s security situation remains stable. Jordan has a professional, effective and capable military. Its strong relationships with the United States and regional allies facilitate joint intelligence and law-enforcement operations that have proved quite valuable.

A stable Jordan is key to winning Iraq. Conversely, the single greatest contribution the United States can make to Jordanian security is to help the Iraqis drive ISIS out of Iraq as quickly as possible.

The elements of an effective strategy for Jordan are well in hand. All the White House has to do is pull the strings together. Time, however, is not on the president’s side. The longer he dithers, the greater the risk of losing both countries to the dark side.