Why an Obama-Putin Summit Would Be a Big Mistake 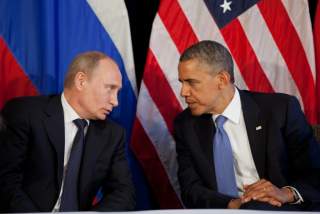 Should President Obama meet with President Vladimir Putin of Russia when both men are in New York for the opening of the UN General Assembly?

Tensions between the United States are rising over the arrival of Russian forces in Syria, and the White House, apparently, is split on whether President Obama should just engage Russia’s leader directly in a one-on-one bid to find a joint approach now that Obama’s foreign policy in the region – such that it was – has completely crashed and burned.

A summit would be a mistake. There’s no need for a summit, and meeting Putin would probably cause more problems than it can solve. We have to let go of the stereotypically American idea that personal meetings are always useful: summits are not generic solutions, like some sort of weekend getaway to repair a relationship. They have to have an agenda, preferably one with achievable goals, and they should be equally valued by both sides. They should also be based on at least a modicum of mutual respect between the two national leaders. Even during the Cold War, summits were treated as a meeting between equals.

A summit with Putin in New York fails to meet any of these criteria. There is nothing to discuss, other than the White House’s general frustration with a world that refuses to play along with its usual inattention to foreign policy. The Russians, for their part, certainly don’t need a meeting; they know exactly what they’re doing. (The Kremlin’s bold moves might not be wise policy on their part, but it’s a policy, which puts the Russians one up on the Americans.)

Besides, Vladimir Putin clearly loathes Barack Obama. Why create one more opportunity for Putin to show his disdain, or for the Kremlin team to demonstrate its insistence that the Obama administration is irrelevant? There’s been enough of that already. One more meeting isn’t going to change the fact that American diplomacy with Russia is dead in the water and has been since the collapse of the ill-fated “reset.”

Even talking about a summit is a bad idea. It makes the Americans look needy and plaintive. Putin is coming to New York anyway, and publicly floating a summit puts the Russian leader in the position of deciding whether he’ll meet the President of the United States in his own country. It is a mystery to me how this White House, after seven years in power, still seems baffled by some very basic tenets of public diplomacy, including the optics surrounding things like this. Like the character in the movie Memento who can’t form new memories, this White House team seems to begin every day starting from scratch when it comes to learning about diplomacy.

Even if the two presidents meet, what will they talk about? Should they sit in a room while our president explains how frustrated he is that Russia is taking advantage of a situation predictably created by a series of cascading U.S. policy failures? John Schindler and I warned two years ago, in these very pages, that Russia would fill the Middle East power vacuum Obama created. Why should Putin now endure Obama hectoring him at a summit over something the Americans should have seen coming miles away?

This conversation is not only a potential public diplomacy mistake, it’s also unnecessary. That’s because it’s already taking place somewhere else: Secretary of Defense Ashton Carter and Russian Defense Minister Sergei Shoigu have quietly established contact and are discussing these issues. That’s as it should be. Let the two defense chiefs work out some proposals over some essential things, like “rules of the road” in the skies over Syria, and then report back to their respective leaders. These are things presidents don’t need a personal meeting with each other to work out.

Finally, there’s one very important reason to quash all this summit talk: because Vladimir Putin has made up his mind about this administration and he isn’t going to change it. Putin has taken Obama’s measure, and has decided he is not a man worth his respect. Sometimes, a summit can introduce, or reintroduce, leaders to each other, and help set a tone for their subsequent discussions. That’s been tried, and it’s failed.

The United States should expect little from Putin, but much of this current circumstance is our own fault. The Obama administration has projected a lack of competence and seriousness for years, not only through garbled policy but through repeated and incomprehensibly foolish presentations of the President of the United States as a self-regarding lightweight. (Putin’s people might snicker about those bare-chested photos, but they’d tell you that at least you’ve never seen Putin cavorting about with a selfie stick) These are images that might play well with people who already liked Barack Obama, but in the rough world of the authoritarians in places like Russia and China, they amount to a confirmation that the U.S. president is not a man who needs to be taken all that seriously. These regimes have acted accordingly, from occupied Ukraine to the fake Chinese islands in the Pacific.

One more summit isn’t going to fix any of that. Instead, one more meeting between the ice-cold Kremlin professionals and the White House amateurs only risks diminishing what’s left of President Obama’s stature. So let me make a more dramatic proposal than merely dropping the New York summit idea: let’s just accept that there will be no point in any other summits, at least with Russia, until a new administration arrives. And let this be a lesson to the next administration, Democratic or Republican, that credibility is a capital sum reduced by petty expenditure. President Obama has left America’s account with that resource completely empty if not overdrawn, and we don’t need another summit to demonstrate it.

Tom Nichols is Professor of National Security Affairs at the Naval War College and an adjunct at the Harvard Extension School. His most recent book is No Use: Nuclear Weapons and U.S. National Security (University of Pennsylvania, 2014) The views expressed are his own. You can follow him on Twitter:@RadioFreeTom.