Why an Obama-Putin Summit Would Be a Good Idea 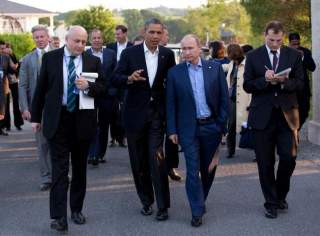 Following Russia’s recent deployment of military personnel to Syria, the Kremlin has intimated that Vladimir Putin would like to meet with President Obama during his upcoming visit to the United Nations General Assembly. By all accounts, the administration is torn. But it is high time for Obama to sit down and have a serious discussion with his Russian counterpart.

In recent years, President Obama has essentially given Putin the cold shoulder. After Russia granted asylum to Edward Snowden, the White House pulled out of a summit meeting scheduled for September 2013 in Moscow. Subsequently, following Russia’s annexation of Crimea in March 2014, Obama has only met briefly with Putin on a couple of occasions: in June 2014, following the commemoration of the 70th anniversary of D-Day in Normandy; and in November 2014, during the APEC summit in Beijing. The two leaders have, on occasion, talked over the phone. But the last time they engaged in an in-depth face-to-face discussion was over two years ago.

Many observers have suggested that by meeting with Putin now, Obama would be playing into his hands or legitimizing the annexation of Crimea. The simple fact is, however, that the annexation of Crimea is a fait accompli whether the United States likes it or not. It would be foolish to allow a stubborn refusal to recognize that reality prevent negotiation over other outstanding points of contention—most notably, the continuing standoff in Donetsk and Luhansk, and the Syrian civil war.

Although it is certainly tempting to punish Putin’s bad behavior by giving him the silent treatment, such a policy is likely to be counterproductive. The fundamental problem with such a policy of isolation is that it will merely serve to confirm his fears and suspicions, while accomplishing little else. Russia’s intervention in Ukraine was clearly motivated by insecurity.  Putin, along with much of Russia’s defense establishment, has interpreted NATO expansion and the development of ballistic missile defenses as attempts to encircle Russia militarily. Similarly, Ukraine’s potential accession to the European Union represented, for him, an attempt to isolate Russia economically.

Many in the West have dismissed those fears. They profess that NATO expansion is not designed to counter Russia. And they insist that sovereign states have the right to join international organizations of their choosing. Those arguments are certainly valid. But regardless of the intentions of NATO and the EU, and the rights of their new and prospective members, the fact is that the expansion of the two organizations has stoked Russian insecurity.

The central task for the Obama administration is therefore to alleviate Putin’s insecurity, which is the primary source of the Russian actions that the United States finds so objectionable. That task cannot be accomplished, however, without dialogue. To be fair, Secretary of State John Kerry and his Russian counterpart, Sergey Lavrov, have engaged in a number of substantive discussions over the past several years.  Unfortunately, since authority in Russia is so centralized, Obama can really only begin to alleviate Russian insecurity by engaging directly with Putin.

President Obama surely realizes this. As a presidential candidate in 2007, he insisted “we need a president who is willing to talk to all nations, friend and foe…If we take the attitude that the President just parachutes in for a photo-op after an agreement has already been reached, then we’re only going to reach agreements with our friends.”  Now that the administration has negotiated pivotal agreements with Cuba and Iran, it is time for Obama to make good on that promise with regard to Russia.

Of course, one conversation will certainly be insufficient to dispel deep-seated suspicion that has built up over a number of years. For that reason, an Obama-Putin meeting at the United Nations must not be a one-off event. Instead, it should mark the beginning of an ongoing dialogue between the two leaders. Although that dialogue may yield few concrete benefits early on (and probably engender a good deal of frustration), it is the only way to convince Putin that Russia has more to gain through cooperation rather than confrontation with the West.

Brad Stapleton is a visiting research fellow in defense and foreign policy at the CATO Institute.