Why Is Obama Suppressing the Atrocities Prevention Board? 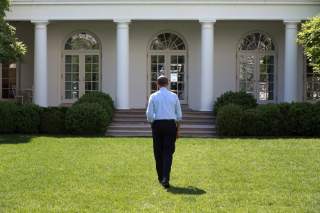 President Obama’s airstrikes in Iraq may have prevented an impending genocide of the Yazidi minority by the Islamic State of Iraq and Syria (ISIS), at least for the time being. However, it is unclear whether the Atrocities Prevention Board (APB)—a government entity created for the sole purpose of flagging risks of mass atrocities for U.S. policy makers—was even involved in identifying the warning signs in Iraq. The APB’s lack of transparency since its creation in 2012 has diminished its standing among U.S. policy makers. This also threatens the board’s continued existence into the next administration, subsequently risking the ability of the United States to act preventively.

U.S. policy makers were concerned about ISIS in Iraq long before airstrikes began in August. In fact, the first in the recent wave of U.S. troop deployments was announced more than two months ago, signifying heightened concern. However, whether or not the APB rang the warning bell in the months before that announcement and the subsequent weeks leading up to airstrikes, remains unclear.

Though it was reported that the APB had explored the topic of the risk of ethnic violence in Iraq, media could not confirm whether the APB had focused specifically on the plight of the Yazidi population prior to Obama’s use of the word “genocide” on August 7. All that is known is that the APB convened on Thursday, August 7 to discuss Iraq, just days before U.S. airstrikes were authorized “in the spirit of the APB,” as an anonymous administration official put it. Rep. Frank Wolf (R-VA), who has repeatedly probed President Obama on the functions of the APB, addressed a letter to Obama on August 7, 2014 questioning the board’s role: “It is now clear to the nation and the world that your words were hollow; your ‘presidential directive’ [establishing the APB] apparently was nothing more than a token gesture.” In the two years since its creation, the APB’s role in other situations of mass atrocity—such as Syria and the Central African Republic—has been just as enigmatic, as its actions have been shrouded in secrecy.

When the APB was created in 2012, the White House stated its intent to issue an executive order to govern the operation and scope of the board. Two years later, the White House has not followed through. During this time, there has also been significant backlash from the media and nongovernmental organizations (NGOs) against the APB for keeping its work concealed and focusing on low-profile cases, rather than those most central to U.S. foreign policy, such as Syria.

The APB’s lack of transparency and covert nature give the public and policy makers the perception that the APB is not effective or may even be inattentive to situations most central to U.S. interests. Unfortunately, failures of the APB will always be more evident than its successes, as the prevention of mass atrocities is hard to prove.

If the Obama administration, and the APB and its proponents, wishes to ensure that the board continues under the next administration, the White House should issue its promised executive order to govern the operation and purview of the board. Most importantly, this should include added provisions to increase transparency and awareness of activities, such as requirements for congressional briefings, NGO working groups and briefings to the media, even if limited in content.

The APB has been marginally successful with regards to lower-scale situations. It has garnered attention among various government departments. Most notably, at the urging of the APB, the Treasury Department, which has generally seen itself as quite removed from conflict-prevention priorities, increased sanctions on human-rights abusers—an instrumental preventive tool. Additionally, the Department of Justice has instructed prosecutors to work on human-rights cases and a fraud team to seize assets of abusers. However, its communication with Congress, whose support is necessary to its continuation, NGOs and media has been limited. This has resulted in these successful accounts being underreported, subsequently diminishing public support for and awareness of U.S. mass-atrocity-prevention priorities.

Before the APB was created, a group of twenty-nine Senators led by Sen. Chris Coons (D-DE) and Sen. Susan Collins (R-ME) issued a letter to Obama supporting the board’s creation and “urged the Administration to work closely with Congress to improve the United States’ ability to anticipate, prevent and respond to genocide and other mass atrocities around the world.” However, the APB has only briefed Congress once and is not required to report to Congress outside of its work being included in the Director of National Intelligence’s annual threat-assessment testimony. On the ten-year anniversary of the Rwanda genocide, more than a year after the creation of the APB, Sen. Coons reiterated his concern in a proposed Senate resolution, urging “the President to confer with Congress on an ongoing basis regarding the priorities and objectives of the Atrocities Prevention Board.” The bill is currently on the Senate legislative calendar.

While it is necessary that the APB not reveal all of its work to the public, there is no explanation for why it has not partnered with Congress. Following in the footsteps of the Millennium Challenge Corporation—an independent U.S. government foreign-aid agency—a partnership with Congress could result in relationships with policy makers that support their efforts and ensure the necessary resources for their continued work.

Additionally, the only known government report on the work of the APB, “National Intelligence Estimate on the Global Risks of Mass Atrocities and Prospects for International Response,” was issued in 2013 and remains fully classified, even to Congress. In the least, the APB should release a summary of the report to clarify with Congress and media that they are a functioning entity and worth continued investment.

After a series of letters, warning of a risk of mass atrocities in Sudan, from more than fifty genocide scholars to the APB went unanswered, the group wrote, “The lack of response, thus far, seems to speak volumes to the APB’s lack of interest in and concern about the opinions of scholars and activists.” Continuing this disconnect will jeopardize the APB’s possible strategic relationship with NGOs that could rally behind its continued existence beyond the Obama administration.

Developing partnerships with NGOs could also greatly benefit the APB. As stated in the annual threat assessment briefing by the director of national intelligence to Congress, and supposedly based on the APB’s warnings, “The overall risk of mass atrocities worldwide will probably increase in 2014 and beyond.” However, the media and NGOs are left in the dark about what these risks are. Regular working groups, even if off-the-record, between members of the APB and NGOs would provide an opportunity to discuss the insights of NGOs working on the ground, and give NGOs a better understanding of U.S. priorities.

Obama has little more than twenty-four months—not long in the land of bureaucracy—to ensure that Congress and the American public understand the purpose and vitality of the APB. This should start with the publicizing of the role of the APB in Iraq, and the signing of an executive order to govern it. The support of at least some Congressional members will be necessary if the APB wishes to prove its worth and continue into the next administration. Similarly, communication with NGOs and the media would help to bring attention to the successes of the APB, confirm its necessity beyond 2016, and garner greater awareness of the unfolding mass-atrocity situations.

Obama characterized the prevention of mass atrocities as a “core national-security interest and core moral responsibility,” and the APB is intrinsic to living up to this commitment. If the White House and the APB continue to conceal the board’s work, its existence beyond 2016 will remain in question.

Amelia M. Wolf is a research associate at the Council on Foreign Relations, and a graduate of NYU’s Center for Global Affairs.