Why Obama Won't Tell the Truth about Terrorism 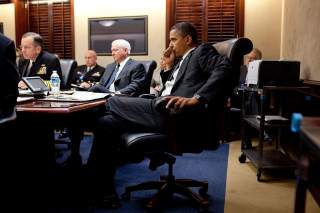 Five years after 9/11, journalist James Fallows suggested in a cover story on terrorism in the Atlantic that Americans “lacked leaders to help keep the dan­ger in perspective.” Fallows’ observation remains valid a decade later.

On Tuesday, in his last presidential address on the terrorism issue, Barack Obama did note, as he has from time to time over the last couple of years, that terrorists “don’t pose an existential threat to our nation” — an observation security specialist Bruce Schneier has aptly characterized as “blindingly obvious.”

However, Obama seems to be ready to go further. In another Atlantic cover story, this one from earlier in the year, Jeffrey Goldberg discloses that Obama “has never believed that terrorism poses a threat to America commensurate with the fear it generates” and that he “frequently reminds his staff that terrorism takes far fewer lives in America than handguns, car accidents, and falls in bathtubs do.”

Islamist terrorism in the United States, after all, has killed in total some six people per year since 9/11. That is six too many of course, but lightning kills about thirty Americans a year, accident-causing deer another two hundred and drownings in bathtubs around four hundred. And eight people die from drug overdoses each day in Ohio alone.

Moreover, the low number of terrorism deaths is unlikely to be the result of security measures. There have been scores of terrorist plots rolled up by authorities over the years but, looked at carefully, the culprits, left on their own, do not seem to have had the capacity to increase the death toll very much. As RAND’s Brian Jenkins puts it, “Their numbers remain small, their determination limp, and their competence poor.” Nor could security measures have deterred terrorism. Some targets, such as airliners, may have been taken off the target list, but, as demonstrated tragically in Paris last year, potential terrorist targets remain legion.

Nevertheless, Obama can’t seem to summon the political courage to say such things in public. Continues Goldberg, “his advisers are fighting a constant rearguard action to keep Obama from placing terrorism in what he considers its ‘proper’ perspective, out of concern that he will seem insensitive to the fears of the American people.”

Something similar happened during the Cold War.

In his speech, Obama said that communism “threatened nuclear holocaust.” However, that is simply not true. As Columbia’s Robert Jervis has noted, “Soviet archives have yet to reveal any serious plans for unprovoked aggression against Western Europe, not to mention a first strike against the United States,” and historian Vojtech Mastny, after looking thoroughly through those archives, concludes, “The strategy of nuclear deterrence [was] irrelevant to deterring a major war that the enemy did not wish to launch in the first place.”

One of the few people to have realized this at the time was Dwight Eisenhower. As his press secretary recorded at the time, although Eisenhower was concerned about what he called “a sort of peaceful infiltration,” he insisted, “after many long, long years of study on this problem,” that “everything points to the fact that Russia in not seeking a general war and will not for a long, long time, if ever.”

But, like Obama, Eisenhower was unwilling to express such unpopular views in public. Instead, he railed against what he called the “military-industrial complex,” attacking a successful lobbying movement for its machinations, but not attacking the premise that gave that movement its effectiveness.

And in both cases, presidents who understood that mistakes were being made were unwilling to say so in public. Instead, they embraced a lesson succinctly put forward by analyst Stephen Sestanovich: “It’s not good politics to display your irritation with the American people.”

That is, it is better to let the people wallow in fearful error than to appear to be insensitive to their fears.

John Mueller is a senior fellow at the Cato Institute and a political scientist at Ohio State. His most recent book, co-authored by Mark Stewart, is Chasing Ghosts: The Policing of Terrorism.