Why Obamacare Must Be Dismantled 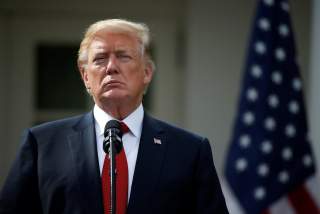 President Donald Trump has decided to stop the flow of Obamacare’s “cost-sharing” subsidies. These are special subsidies to reduce out-of-pocket costs for low-income people in the health insurance exchanges.

Put down the smelling salts. This is not catastrophic. The vast majority of low-income people getting federal subsidies in the Obamacare health insurance exchanges are going to be OK.

On the other hand, Trump’s decision won’t save taxpayers any money. In fact, it will hike federal spending, as well as add to the deficit.

Obamacare’s subsidy structure is complicated. Enrollees in a health insurance exchange who have annual incomes between 100 and 400 percent of the federal poverty are eligible for Obamacare’s generous premium subsidies. Almost nine out of ten enrollees qualify for these subsidies.

A subgroup of these people—those with incomes between 100 and 250 percent of the federal poverty level are also eligible for an additional set of subsidies: “cost-sharing reduction” (CSR) subsidies. About six million people fall in this category.

For 2017, a single person in this income category would have an annual income between $12,060 and $30,150. Like the premium subsidies, the amount is adjusted by family size.

Cost-sharing subsidies are available for people enrolled in the standard (aka “silver”) health plans, in which 70 percent of the costs are covered by the insurance. These subsidies—estimated to be $7 billion annually—go directly to the insurers to offset the out-of-pocket costs that they pick up on behalf of their enrollees.

So, what happens to the people affected by the cut-off of subsidies to the insurers?

The Congressional Budget Office (CBO) examined this issue and estimated that there would be a minimal impact on enrollees. Some insurers would not enter the exchange markets and others would withdraw from it, but the CBO said this would affect “about 5 percent of people liv[ing] in areas that would have no insurers in the nongroup market in 2018.” With a cut-off, the CBO projected an initial market disruption in 2018, accompanied by a reduction in coverage by about 1 million. By 2020, however, the insurers would participate in “nearly all areas” and people would again be able to buy insurance in the nongroup market. The CBO further projected that un-insurance would be “about 1 million lower in each year starting in 2020.”

Last August, the CBO’s relatively mild assessment of a cost-sharing cut off in the state exchanges was hypothetical. In reality, insurers in thirty-five states had already taken precautions in their premium setting for just such an eventuality. For example, health insurers in California anticipated the discontinuation of the subsidies and set their 2018 rates accordingly and added 12.4 percent to their premium charges with the approval of state officials. All eleven insurers will maintain those rates and charges in 2018.

Obamacare’s premium increases this year are averaging 25 percent nationwide. Big deductibles are hurting everybody. But low-income persons, in particular, need help so that they can afford their coverage. Obamacare’s regulatory policies, particularly its age-rating rules, actuarial value and health-benefit mandates. Also, they drive up health insurance costs. This discourages enrollment in the exchanges, especially among younger, healthier people and middle-class consumers who are ineligible for government subsidies. Their nonenrollment—particularly if they are young and healthy—likewise contributes to higher per-enrollee costs.

Without the cost-sharing subsidies, insurers will increase premiums to offset their increased costs. In August, the CBO projected a 20 to 25 percent jump, though it is likely to be less than that in many of states where insurers and state officials anticipated such an eventuality. Increased insurance premiums, however, automatically trigger increased government subsidies to cover the additional premium costs for low- and middle-income persons in the exchanges eligible for the premium subsidies.

For the lowest income cohorts, the CBO concluded that “although gross premiums would be higher because of the termination of the CSR payments under the policy, net premiums would be determined as a percentage of people’s income, and larger premium tax credits would make up most of the difference.”

Also, because the “silver plans” won’t be the venue for getting the cost-sharing subsidies, enrollees will choose other options, such as the more expensive “gold” plans. The vanishing government subsidy suddenly reappears as a bigger draw on the federal treasury.

Thus, the president’s decision to cut the cost-sharing subsidies ($118 billion over ten years) will result in higher federal spending. The CBO estimates that the total ten-year “gross” spending for the premium subsidies will increase by $365 billion, adding about $194 billion to the deficit.

As a legal matter, President Trump’s policy is the right policy: the Constitution does not allow the administration to withdraw funds from the Treasury—as President Obama did—without a congressional appropriation. The cost-sharing subsidies did not, and still do not, have any such appropriation.

As a policy matter, President Trump’s action will yield very mixed results. It is likely to create short-term pain for insurers, and some disruption for enrollees. But the exchange market will be only temporarily affected, and—if the CBO is correct—insurance coverage will likely increase. Increased federal spending and higher deficits, however, are a bad fiscal bargain.

As a political matter, President Trump’s action is already reigniting Capitol Hill seriousness on health policy. The central issue is health-care cost, especially the affordability of insurance. The first order of business, therefore, is tackling the federal regulatory excesses driving up those costs for everybody.

After cutting artificially high costs through regulatory reform, Congress should calibrate the level of taxpayer assistance necessary to make health insurance affordable for low-income persons: those who need the most help. In that context, cost-sharing subsidies—appropriated by Congress as the Constitution requires—could be an excellent bargaining chip. In return, Congress could secure major federal regulatory relief for everybody—especially for the millions of unsubsidized, middle-class Americans now struggling with high health insurance costs.

Time for the Art of the Deal.

Robert E. Moffit is a senior fellow at The Heritage Foundation’s Center for Health Policy.