Why Obama's Coercion Strategy in Ukraine Will Fail 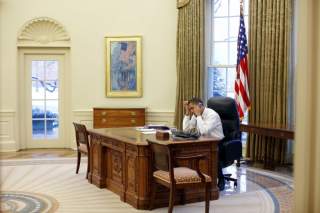 The downing of Malaysian Airlines Flight 17 has dramatically escalated tensions surrounding the Ukraine crisis. On Tuesday, the EU and the United States enacted unprecedented economic sanctions against Russia, the world’s sixth largest economy. The talk in Western capitals is about the degree of punishment to exact against Russia for its actions and the extent of support to provide to the Ukrainian government, be it political, military or financial. This two-pronged approach has rapidly become conventional wisdom in policy circles.

And it is understandable why the West is responding this way—having annexed a neighbor’s territory, stoked an armed insurgency, and now created the circumstances under which three hundred innocents perished, Russian president Vladimir Putin and his government have left Western leaders little choice. Yet this approach, while morally justified and responsive to the politics of the moment, is likely to backfire with potentially catastrophic consequences.

The outcome demanded by Western officials—and pursued on the ground by the Ukrainian authorities—entails an immediate halt in Russian aid to the insurgents that would allow the government forces to crush the insurgency, establishing full control over Ukraine’s sovereign territory. This outcome is both highly unlikely to come to pass and deeply problematic.

It is improbable because it requires Russia to sit on the sidelines and not take steps to prevent it from materializing. But for President Putin, this scenario represents complete strategic defeat and public humiliation. The insurgency in Ukraine for him is leverage to extract assurances about the country’s future geopolitical and geoeconomic course. If the rebels are crushed, the Kremlin believes it will have “lost” Ukraine to the West, an outcome it cannot accept under any circumstances.

For coercion—accurate shorthand for the Western sanctions strategy—to be effective in ending a conflict, the sides’ interests cannot be completely opposed. As Thomas Schelling, the international relations scholar, observed in his 1967 classic Arms and Influence, “Coercion requires finding a bargain, arranging for him to be better off doing what we want—worse off not doing what we want—when he takes the threatened penalty into account.” However irrational it might seem to the rest of the world, there is no feasible penalty that makes the desired Western outcome in Ukraine acceptable to Moscow. Under those circumstances, Schelling observed, escalation is inevitable: “If his pain were our greatest delight and our satisfaction his greatest woe, we would just proceed to hurt and to frustrate each other.”

Despite the tough new Western sanctions this week, Ukraine simply matters far more to the Russian elite and the Russian people than it does to the United States, the EU foreign-policy establishment or the American or EU citizenry. That is a reality that will not change with time. And it suggests that while Western governments will only take measures that have no significant impact on their economies, Russians—its leadership and people—are willing to pay a price to pursue their goals. In short, absent a negotiation process involving genuine give and take, the strategy of coercion will likely fail to change Russian behavior.

In his remarks announcing the new sanctions on Tuesday, President Obama even suggested that talks are unnecessary:

Obviously, we can't in the end, make President Putin see [reason]. Ultimately, that's something that President Putin has to do on his own. But what we can do is make sure that we've increased the costs for actions that I think are not only destructive to Ukraine, but ultimately are going to be destructive to Russia as well.

The president of the United States can in fact try to make Putin see reason through (in-person, not over-the-phone) negotiations. But there is no diplomatic process at the moment—and President Obama’s statement implies that the sanctions aren’t even supposed to produce a negotiated outcome.

The desired Western outcome is, therefore, quite a long shot. But it’s also problematic for Ukraine’s future. Even if Russia can somehow be brought to heel, an outright military victory for Kiev in the East—absent an internal political track—could further divide the country, not bring it together. The Ukrainian military, National Guard and paramilitary groups fighting in the East have violated President Petro Poroshenko’s pledge not to attack the two rebel-held cities of Donetsk and Lugansk. In fact, according to a Human Rights Watch report released last week, they are using heavy weapons in civilian-populated areas, including unguided Grad rockets, which killed at least sixteen civilians in Donetsk and surrounding areas over nine days. According to the Ukrainian government’s own reporting, men in camouflage uniforms without identifying badges, most likely pro-government paramilitary forces, are looting and robbing civilians in the areas of the region retaken by Kiev in recent weeks.

In Kiev today, public debate about the way in which the government has used force in the east is practically impossible. One opposition MP was recently physically ejected from the parliament building after decrying the government forces’ killing its own citizens during the operation in the East. Further, Donbas’s central demand for greater autonomy remains unfulfilled. Poroshenko’s proposed decentralization plan has stalled in the parliament and will now likely be delayed until next year at the earliest. Unsurprisingly, Kiev is losing the hearts and minds of its citizens living in the conflict zone. The latest polling from the region indicates that in early July, 37 percent of respondents in Donbas endorsed secession, whereas three months earlier that number was around 30 percent.

In his remarks on Tuesday, President Obama suggested that the Ukraine crisis will end only when “the Russians recognize that the best chance for them to have influence inside of Ukraine is by being good neighbors and maintaining trade and commerce, rather than trying to dictate what the Ukrainian people can aspire to.” Certainly such a dramatic change in Moscow’s attitude would be welcome. Unfortunately, the levers of power that Obama and his European colleagues are willing to exercise will not make it happen. Instead of talking about Putin, they will have to start talking to him in order to avoid even greater catastrophe and suffering in Ukraine.

Samuel Charap is Senior Fellow for Russia and Eurasia at the International Institute for Strategic Studies.