Why Obama's Second Term Paved the Way for Trump's Rise 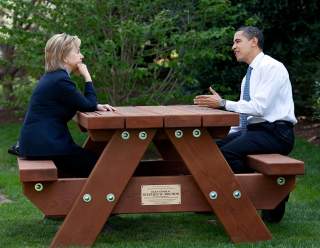 The presidential legacy of Barack Obama lies shattered upon the floor of the nation, like shards of glass from a broken window. Among the figures of the American governing elite stung by Donald Trump’s staggering presidential victory, none took a greater hit than the president, whose political repudiation reached a magnitude that is rare in American history. Indeed, it is all the more powerful given Obama’s almost desperate late-campaign stump efforts on behalf of Democratic nominee Hillary Clinton, during which he blasted Trump in dismissive and frequently mocking terms.

As I have argued on occasion in these spaces (and explored at length in my book, Where They Stand), presidential elections are largely referendums on the incumbent president or incumbent party. The voters make their judgments every four years based on one overarching question—namely, has this president (or incumbent party) performed in office with sufficient capacity and success to be eligible for rehire. In such calculations, the voters largely subordinate the background and pronouncements of the challenger.

Nothing reflects this reality of presidential politics more starkly than two exit poll responses on Election Day. Among voters who said they felt that neither candidate was qualified for the presidency, Trump was favored by 69 percent to little more than 10 percent for Clinton. Among those who said neither had the temperament for the White House, some 70 percent favored Trump compared to 11 percent for Clinton. In other words, even voters with serious concerns about Trump voted for him. Referendum politics prevailed.

And in referendum politics, the voters render their judgments on each presidential term separately, not on overall presidential performance. Thus did Obama’s first presidential term fade in the background as voters assessed the second term. Clearly, that second-term assessment proved adverse.

It is worth noting that Obama was reelected in 2012 by a thin margin of 3.86 percentage points. Indeed, this puts him in a select group of just four presidents re-elected (or elected a second time in the case of Grover Cleveland) by less than four percentage points. That group also includes George W. Bush and Woodrow Wilson. What we see in all four instances is that those presidents’ first terms were hardly stellar but not sufficiently problematic to preclude a second term. Then latent problems from the first term caught up with them, and their second terms brought electoral repudiation at the next election.

In the case of Obama, his Affordable Care Act didn’t become the policy catastrophe it later became in the second term. Voters didn’t fault him terribly for his modest performance on economic growth because they understood that he had inherited an economic disaster upon taking office in 2009. His stewardship of U.S. policy in the Middle East hadn’t yet yielded the troubling emergence of Islamic State in Iraq and Syria. The intervention in Libya hadn’t yet caused significant destabilization in that country and neighboring regions—or contributed yet to the spread of ISIS. The Black Lives Matter movement hadn’t yet spawned the street demonstrations, with occasional violence, that later unsettled domestic tranquility, and random killings of police officers hadn’t yet occurred, as they later did. There was no major scandal in the first term, whereas Hillary Clinton’s email imbroglio later would reflect poorly on the administration during the second term.

What we see is a president whose first-term performance rendered him eligible for rehire—but not by much. Then the second term unfolded in ways that ensured no Democrat could beat any Republican in the 2016 presidential referendum. Continued sluggish economic growth that stymied job opportunities and nudged millions of Americans out of the job market; chaos in the Middle East with America increasingly muddling through and with no end in sight for U.S. involvement; street violence tied to racial tensions; the disintegration of Obamacare as a predictable and workable health-care structure; a scandal managed in part by suspicious behavior on the part of the Obama Justice Department and what seemed like FBI incompetence; lack of any serious domestic-policy accomplishment—all these second-term developments sapped the president’s standing with the American people.

It must be noted that Obama’s approval rating actually moved up in his last presidential year—to nearly 53 percent in the recent Real Clear Politics average—after languishing between 40 percent and 45 percent through much of 2014 and 2015. But surveys on whether Americans felt the country was headed in the right direction remained ominous, with close to two thirds of respondents saying the country was on the wrong track. That’s a reading that should chasten any president.

Then there was Obama’s approach to those Americans who would become the bedrock of the Trump constituency (and once was the bedrock of the Democrats’ old New Deal coalition)—white working class Americans. The president largely ignored these people and seemed unconcerned over or unaware of their plight. The big banks on Wall Street thrived under Obama, notwithstanding their contribution to the Great Recession and their facility in gaming the system set-up after that debilitating economic disruption. The poor seemed always on the president’s mind. But those people once viewed as the core of “Middle America” were forgotten and left forlorn.

The American people render their presidential judgments every four years without sentimental angst of any kind. They merely assess incumbent performance and go thumbs up or thumbs down without anguish or hand-wringing. For Obama’s second term, it was thumbs down—notwithstanding the unsavory behavior traits and sometimes brutal rhetoric of the Republican challenger; and certainly notwithstanding the palpable contempt that the sitting president had for that challenger.

That outcome doesn’t provide much prospect for any serious Obama legacy to be enshrined in history. His Affordable Care Act, soon to be superseded, will be viewed as something of a domestic folly. His foreign policy will seem fitful and feckless, without lasting pillars of stability or national benefit. His domestic policy patrimony will be seen as thin and fleeting. His defiant resolve to circumvent congressional roadblocks through the issuance of executive orders will be wiped away within days of his leaving office. His effort to move the country into a new era of governmental activism in the tradition of the New Deal and Great Society will have failed. Whatever new direction he had in mind for America will be abandoned definitively.

Not much of a legacy—except insofar as his second-term leadership helped pave the way for the rise of Donald Trump.