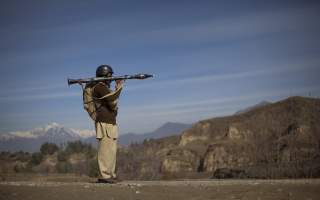 There was a time in the 1960s when Pakistan was referred to as America’s “most allied ally” because of its membership in several multilateral defense organizations, such as SEATO and CENTO, led by the United States. Washington still technically considers it a “major non-NATO ally.” This was an honor conferred in 2004, largely in response to President Pervez Musharraf’s support for the American invasion of Afghanistan after the terrorist attacks of 2001. But one would not guess that fact from hearing or reading President Trump’s recent diatribes against Pakistan.

In his first tweet on New Year’s Day, Trump singled out Pakistan for harsh criticism. He declared, “The United States has foolishly given Pakistan more than 33 billion dollars in aid over the last 15 years, and they have given us nothing but lies & deceit, thinking of our leaders as fools. They give safe haven to the terrorists we hunt in Afghanistan, with little help. No more!”

Trump’s warning came soon after his administration leaked the news that it was planning to withhold $255 million in U.S. aid to Islamabad. The tweet was followed in a few days’ time by the announcement that Washington was freezing nearly all security aid, amounting to $1.3 billion annually, to Pakistan. The United States has made such threats periodically, especially in July 2011, two months after the assassination of Osama bin Laden, without succeeding in changing Pakistan’s policy toward Afghanistan and its support for groups that the United States calls terrorists. Small course corrections apart, Islamabad has gone about business as usual, and eventually Washington has been forced to come to terms with the new constants in Pakistan’s foreign and security policies.

The main reason why successive American administrations have been unable to force Pakistan to alter the direction of its foreign policy, despite billions of dollars in aid, is that the principal objectives of the two countries’ foreign policies are vastly different from each other, and often run counter to one another. Until the end of the 1980s, the main American objective in South and Southwest Asia was to counter what it considered the Soviet Union’s push toward the warm waters of the Indian Ocean. Alliances were formed with the intention of containing the Soviet Union and, if possible, pushing it out of the countries in which it had acquired influence.

As early as the early 1950s, Secretary of State John Foster Dulles perceived Pakistan to be a major military and political asset that could contribute to the containment of the Soviet Union, especially since its larger neighbor India had declined to accept this role. Consequently, the United States entered into a Mutual Defense Assistance Pact with Pakistan in 1954, and the latter joined the aforementioned multilateral anticommunist alliances.

Pakistan was willing to play the role assigned to it by Washington, as long as it served its principal objective: to “borrow power” from abroad in order to neutralize India’s inherent power superiority in South Asia. This need became especially acute for Pakistan after the First Kashmir War of 1947–48, which left the bulk of the disputed territory under Indian control. For Pakistan, anticommunism and anti-Sovietism were a ruse to attract military aid, in the form of sophisticated weapons as well as economic assistance from the United States.

The first major indication of Pakistan’s real goal came in the early 1960s, when, coinciding with the Sino-Indian War of 1962, it turned toward China, then America’s principal antagonist in Asia, for assistance to neutralize India. China and Pakistan, it became clear, shared a major strategic objective vis-à-vis India—and therefore Pakistan developed a close relationship with Beijing, despite the temporary setback it brought to relations with Washington.

India adopted a policy of nonalignment soon after independence in 1947, though deliberately tilting toward the Soviet Union starting in 1954, when the United States established an alliance relationship with Pakistan. Islamabad’s relations with Washington cooled in the 1960s, but were revived somewhat in 1971, when Pakistan expedited the rapprochement between the United States and China by facilitating Henry Kissinger’s secret visit to Beijing. In return, the United States supported Pakistan in its war with India in December 1971, in part to demonstrate to China that there were areas where Washington’s interests overlapped with those of Beijing.

But it was not until the Soviet invasion of Afghanistan, in 1979–80, that America’s relations with Pakistan were rejuvenated, when President Zia-ul-Haq became the principal conduit funneling U.S. military aid to insurgents fighting the Soviet-supported regime in Kabul. This did not come without a price: Pakistan was allowed to keep a significant part of the arms being sent into Afghanistan, to bolster its own military strength vis-à-vis India.

In addition, successive American administrations deliberately turned a blind eye toward Pakistan’s clandestine nuclear-weapons program, which came to fruition sometime in the 1980s, although Islamabad did not test nuclear weapons until 1998, following India’s nuclear tests. It was clear that while Pakistan helped the United States make Afghanistan into the Soviet Union’s Vietnam, Pakistan seized the opportunity to bolster its conventional capacity, as well as build a clandestine nuclear arsenal to counter India’s conventional superiority and its putative nuclear capability in South Asia.

Throughout the last half of the twentieth century, the United States and Pakistan collaborated on strategic issues whenever it suited them, but their principal objectives diverged fundamentally. The United States was fixated on its rivalry with the Soviet Union in the context of the Cold War. Pakistan was obsessed with India’s power superiority, which the 1971 defeat and the creation of Bangladesh made all the more galling. Pakistan believed that its security could only be ensured by conventional military parity with India and, failing that, by a second-strike nuclear capability that would deter New Delhi from launching a conventional attack, whether over Kashmir or some other dispute.

A byproduct of Pakistan’s search for security against India was its quest for a friendly government in Afghanistan that could help provide it with defense in the event of a future war. Afghanistan had traditionally been a troublesome neighbor for Pakistan since the latter’s independence because Kabul did not recognize the legitimacy of the British-imposed Durand Line, which formed the boundary between the two countries. Furthermore, shared antipathy toward Pakistan brought India and Afghanistan into a semi-alliance.

All this changed with the Soviet invasion of Afghanistan, following which Pakistan emerged as the primary supporter of Afghan independence, especially since India chose to remain ambivalent. In fact, New Delhi supported the Soviet stance that American and Pakistani intervention in Afghanistan was the root cause of the troubles in that country.

For the first time in its history, Pakistan gained the chance to have a friendly government in power in Afghanistan after the Soviet Union withdrew in 1989. Islamabad achieved this with the installation of the Pakistan-supported Taliban regime in 1994. But this lasted only until 2001. In that year, Pakistan was forced to side with the United States against the Taliban because, according to Musharraf himself, the Bush administration threatened to bomb Pakistan into the Stone Age if the latter did not cooperate with the American war against Al Qaeda and the Taliban in Afghanistan.

However, Pakistan never fully gave up its aspiration to have a friendly regime in Afghanistan—or at least one that did not engage in strategic and economic cooperation with India, threatening Pakistani interests. Failing this, Pakistan would have liked to see a permanently destabilized Afghanistan, lacking the capacity to act as a strategic proxy for either India or the United States. Islamabad’s support for factions of the Afghan Taliban and other groups, like the Haqqani network, that target American forces in Afghanistan, are a part of this strategic calculation.

This is what has brought Islamabad into direct confrontation with Washington, which continues to bleed from its seventeen-year intervention in Afghanistan. As President Trump’s threat demonstrates, Washington holds Pakistan primarily responsible for the continuing mayhem in Afghanistan, as well as for facilitating attacks on American targets by the Taliban and other insurgent groups. However, for Pakistan, supporting the Taliban and other militant groups is an eminently rational strategy, in the absence of a pro-Pakistan regime in Kabul that is willing and capable of keeping Indian influence to a minimum.

Worsening American relations with Pakistan are, therefore, a reflection of the contradictions inherent in the relationship since it began in the 1950s. However, this is unlikely to lead to a total break. The United States needs Pakistan as a main supply route for its forces engaged in Afghanistan. The supply route through Central Asia is a poor substitute for the facilities it has in and through Pakistan. Pakistan, despite occasional bravado on the part of its leadership, continues to rely on the United States for advanced weaponry to prevent the balance of conventional forces tilting further in India’s favor.

Both Islamabad and Beijing tout the China-Pakistan Economic Corridor scheme as a new economic lifeline that would, among other things, make Pakistan’s economic dependence on the United States redundant. According to C. Christine Fair, an astute observer of the Pakistani scene, “Pakistani and Chinese officials boast that CPEC will help address Pakistan’s electricity generation problem, bolster its road and rail networks, and shore up the economy through the construction of special economic zones.” But, she concludes, “these benefits are highly unlikely to materialize. The project is more inclined to leave Pakistan burdened with unserviceable debt while further exposing the fissures in its internal security.” Pakistan will, therefore, have to continue to rely on the periodic infusion of American economic assistance to keep itself afloat.