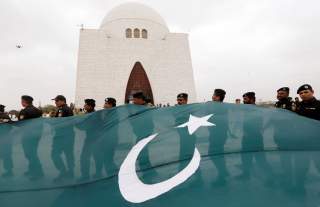 Recently, India abruptly ended special autonomy of the Indian-administered Kashmir and dismembered it into two federally administered regions. A revved-up Pakistan prime minister resorted to all means to attract the attention of the global community to attend this issue including nuclear saber-rattling. Many countries have turned a blind eye to Imran Khan’s entreaties for intervention advising both neighbors to resolve the matter bilaterally. Nothing has flustered and disappointed the Pakistan politicos and public more than the outright inaction of Saudi Arabia and the UAE coupled with their acts of heaping highest civilian awards on Indian prime minister Narendra Modi. Historically, Pakistan has considered both these Gulf nations as custodians of ummah—a global community of Muslims—and looked upon them in moments of crisis. In the wake of India-U.S.-UAE/Saudi Arabia strategic configuration, that spirit of pan-Islamism needs to be revisited.

In the aftermath of unilateral action by New Delhi, the Emirati ambassador to India termed the matter as “internal to India” while the Saudi foreign ministry issued an equally tepid response. Taking a veiled dig at Saudi Arabia and the UAE, and by extension, the wider silence from the Arab world, including Bahrain, Oman, and Kuwait, Shah Mehmood Qureshi, the Pakistan foreign minister, bewailed “Islamic ummah has economic interests in India.” Qureshi suggested that Pakistanis should not expect any relief from them. The meltdown and angst, however, was more hysterical and palpable in media and broader public opinion. The Nation, a leading English daily, published an editorial titled “The Shattered Ummah.”

The rationale of economic interests forwarded by Qureshi is half true. Undeniably, for both Gulf monarchies, India is a prized economic partner. Collectively, both these nations exchange goods to the tune of $80 billion with India. Nevertheless, trade alone does not help understand the slew of reactions, or the lack thereof, from the Gulf. The Islamic countries that have stood by Pakistan on the matter of Kashmir—Iran, Malaysia, and Turkey—trades nearly ten times more goods with India compared to its beleaguered neighbor. The key to Pakistan’s bewilderment lies elsewhere, perhaps in a newer geopolitical realignment.

The strategic convergence between the United States and the Gulf duo of Saudi Arabia and the UAE is at apogee, especially due to President Donald Trump’s indulgence. Despite public and congressional outrage in the United States over the killing of Jamal Khashoggi or the war in Yemen, the Trump administration has stood like a rock behind the two Gulf allies. Reciprocating the favor, both Gulf monarchies have toed Washington’s line on Iran despite significant stakes in the Gulf of Hormuz and possible catastrophic fallout.

On the other flank, the U.S.-India relationship has been upgraded to a strategic partnership. The ministerial-level 2+2 dialogue, the granting of Strategic Trade Authorization Tier 1 status to India, Washington’s unwavering support in getting New Delhi’s targeted terrorist Masood Azhar proscribed at the UN, and the soaring bilateral trade of $142 billion are redefining the relationship at all levels. There are issues of friction in the areas of defense and trade which are getting contained through assiduous dialogues.

The third arm of the triangle is nascent yet sprawling rapidly in almost all possible realms of bilateral cooperation—energy, defense, trade, technology and culture. For example, Indian consortium of oil producers recently signed an agreement with Saudi Aramco and UAE’s Abu Dhabi National Oil Company to develop world’s largest refinery in India at a cost of $44 billion, one among many energy investments by both Gulf nations.

The UAE, home to 3.3 million Indian expats, has India as its largest trading partner. Both UAE and India have entered into a Comprehensive Strategic Partnership with their first joint naval exercise held last year. Going out of his way, Abu Dhabi’s Crown Prince Mohammed bin Zayed Al Nahyan also granted vast swathe of land for a traditional Hindu temple in Abu Dhabi.

Similarly, on his maiden visit to New Delhi in February 2019, Saudi Arabia’s Crown Prince Mohamad bin Salman announced the institution of Strategic Partnership Council to foster mutual ties in the areas of defense, energy, and technology along with investment pacts of $100 billion. The visit happened when the prince was increasingly stigmatized globally over Washington Post journalist Jamal Khashoggi’s macabre murder, a matter expediently ignored by New Delhi. By extending the prince’s patented, chummy hug, Narendra Modi entered the club of Donald Trump and Vladimir Putin to approbate the prince publicly.

Not that Saudi Arabia and the UAE lacked catalysts for strategic convergence with India, the pivotal role of Trump administration in the renewed bonhomie between Riyadh, Abu Dhabi, and New Delhi cannot be ignored. India’s cold silence on Yemen and Jamal Khashoggi and the Gulf duo’s fiddling of non-interventionist tunes over Kashmir have one common denominator—the United States’ stance over issues. Neither of the three corners of this strategic triangle share values, legacy, or common frontiers to defend; it is a fortuitous “convergence of civilizations” based on selfish motives, sometimes reinforced by mutually agreeable assessment of geopolitics.

Notwithstanding both Gulf monarch’s strategic tango with New Delhi, partly choreographed by Washington, they have continued to dole out dollars to Islamabad when insolvency started the latter. Pakistan should not mistake this largesse for a spirit of pan-Islamism. Both monarchs have respected their shared history with Pakistan, which may not be taken as self-evident under all circumstances.

A crucial departure by Khan administration was to redefine Islamabad’s usual revanchist narrative on Kashmir to a religious one—a Hindu nationalist government pitted against a Muslim majority state—partly taking a cue from India’s internal politics. The contrivance was aimed to elicit an immediate response from fifty-odd Islamic nations and international organizations such as the Organization of Islamic Conference (OIC). Nevertheless, the response of the Islamic world was a mixed bag with a handful of favorable opinions.

Iran’s supreme leader Ayatollah Khamenei tweeted that Tehran expects “just policy” from New Delhi to “prevent the oppression & bullying of Muslims in this region.” Further, the Iranian parliament adopted a resolution censuring Indian action. While the Turkish president Erdogan assured Islamabad of “steadfast support,” the Malaysian prime minister called for “respecting UN Resolutions,” which is a tacit endorsement of Pakistan’s line of argument. The two nations to unequivocally denounce India—Iran and Turkey—are unsurprisingly at stark odds with the Trump administration.

Surprisingly, neither of these openly pro-Islamabad positions from Islamic counterparts regaled Pakistan. Even worse, Qureshi, who earlier lamented ummah’s apathy, failed to thank the three sympathizers. A notion of ummah emanating from Saudis and Emiratis that is deeply ingrained in Pakistan society explains its befuddled behavior.

In the time to come, the strategic confirmation between the United States, India, and the Gulf duo is going to strengthen. For Pakistan, it is therefore prudent to reorient its desire of global Islamic solidarity over Malaysia-Turkey-Iran axis, one that is already institutionalized through D8 Organization of Economic Development. A geopolitically realigned ummah sans U.S. allies is the new reality for Islamabad to come to terms with.

Chirayu Thakkar is a political commentator based in India. He graduated from the Contemporary South Asia program at the University of Oxford.