Why Peace With North Korea Makes Sense Even Without Disarmament 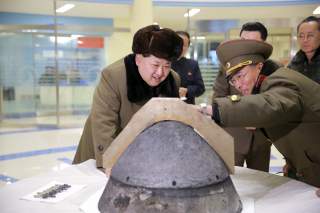 Rumors abound that President Donald Trump will soon declare the end of the war with North Korea. This is generally framed as a means to encourage the country to give up its nuclear weapons program. It is common sense that to convince a man to put a gun down, the man must first be convinced that no harm will come to him. The problem with this strategy is how difficult it is to reconcile with intelligence on the prospects for disarming North Korea. Peace makes much more sense when it is considered as the end goal, rather than a means to the end of denuclearization. In a stand-off, agreeing to lower guns is already progress. Peace at least ensures that the nuclear power we are facing is not hostile anymore.

Bargaining for Bombs with a Piece of Paper

All-or-nothing demands for the full denuclearization of North Korea clash with existing intelligence. Director of National Intelligence Dan Coats recently testified that North Korea is “unlikely to completely give up its nuclear weapons and production capabilities, because its leaders ultimately view nuclear weapons as critical to regime survival.” The previous director, James Clapper, delivered a similar verdict when he described denuclearization as a “lost cause” insofar as it would strip North Koreans of their “ticket to survival.”

Some may still try to use peace as means to denuclearize by arguing that North Korea would accept a peace agreement as a substitute “ticket to survival.” The problem is that this runs counter to the fundamental premise of the country’s Juche ideology: sovereign self-reliance. Swapping nuclear weapons for a peace agreement implies that it must give up something it had full control over in exchange for a piece of paper, which henceforth makes it depend on U.S. goodwill. Of course, this would be a great deal for the United States. But how confidently can Americans bet on a strategy that depends first on U.S. intelligence being wrong, and second on the North Koreans renouncing who they are?

While it makes little sense for North Korea to sacrifice its bombs, the country has plenty of reasons to still want peace. Economic destitution means that its military budget has been hopelessly outspent for decades even just by South Korea. Nuclear weapons came as a comparatively cost-effective way to restore some balance, but their only rational use is as a deterrent, not as offensive weapons. The safest position North Korea can be in today is quite simply to keep the bombs and have a peace agreement to boot. That is most likely what they are aiming for.

There are more and more hints that Trump is pursuing peace as an end in itself, rather than as a means to denuclearize. Perhaps he is doing this for a Nobel Peace Prize, perhaps he just takes his inspiration from the way former President Richard Nixon made peace with a hostile communist nuclear power. The bottom line is that this approach is much easier to reconcile with the negative intelligence on disarmament prospects.

At the first U.S.-North Korea summit in June 2018, Trump and Kim Jong-un extended an olive branch to one another by committing “to establish new U.S.-DPRK relations in accordance with the desire of the two countries for peace and prosperity.” Denuclearization was not truly part of the deal. It is an open secret that North Korea’s commitment to “work towards the denuclearization of the Korean Peninsula” was a face-saving artifice. It refers to the impossible objective of also ending U.S. nuclear capabilities capable of reaching the Korean Peninsula.

Trump has since played up expectations for peace and played down those for disarmament. After the summit, he made clear he saw “no time limit” for the process of denuclearization. At the same time, though, he declared that there was “no longer a Nuclear Threat from North Korea.” Obviously, the message was not that North Korea no longer had nuclear weapons. It was that North Korea would no longer be a threat to the United States. After all, Trump and Kim had just agreed at the summit to end the hostile relationship between their countries.

This “peace now, denuclearization later” messaging has continued in the run-up to the second U.S.- North Korea summit in Hanoi. Trump had Special Representative for North Korea Stephen Biegun negotiate certain crowd-pleasing sacrifices from North Korea, but otherwise declared that he was in “no rush” to see denuclearization happen. Meanwhile Biegun gave strong hints that Trump was focused on peace. “In President Trump,” he said, “the United States has a leader who, more so than any previous president, is deeply and personally committed to once and for all bringing an end to seventy years of war and hostility on the Korean Peninsula.”

It is one thing to accept that peace is an unlikely catalyst for denuclearization. It is quite another to actively pursue peace as an end in itself as Trump appears to do. The North Koreans want it, but what interest would the United States have in changing the status quo? What’s wrong, from a realist perspective, with extending these “seventy years of war and hostility on the Korean Peninsula”?

Pursuing peace as an end in itself is consistent with the evolution of the North Korean threat to U.S. and allied security. In the Bill Clinton and early George W. Bush years, the worst North Korea could do without a functioning bomb was to help or inspire other State or non-State actors obtain nuclear material. In this setting it made more sense to use peace as a means to an end in the Agreed Framework and Six-Party Talks. A peace agreement is arguably a stronger security guarantee than an unfinished bomb, so it was still an attractive incentive. Today, however, the country has become a full-fledged nuclear power. The indirect threat of nuclear proliferation now pales before the direct threat of an intentional or accidental escalation into nuclear war. The only rational use of the bombs is deterrence, but deterrence is enhanced by acting like a madman, and that can quickly go wrong when both sides start playing a game of chicken. A peace agreement would reduce the catastrophic risk of nuclear escalation. The agreement could also contain provisions to better prevent the risk of proliferation than what is now the case.

The value of a peace agreement lies specifically in raising the legal and operational threshold at which hostilities could break out. The only legal barrier to the use of force in a state of war is humanitarian law, which includes rules such as not attacking non-combatant civilians. A peace agreement restores the applicability of the peacetime law on the use of force. This body of law is generally understood to prohibit the use of force in international relations, except where authorized by Security Council resolutions or where used in self-defense. Peace also implies that the armed forces of each side would operate under principles that reduce the risk of conflict escalation. Inspiration here might be found in the provisions of last year’s inter-Korean military agreement, which addressed rules of engagement, force deployment, direct communication lines, etc.

Making peace with the North does not mean that the United States will have to leave the South or that the alliance will be dissolved. The North has no say in these bilateral matters and any demands it may attempt can simply be rebuked as being none of their business. The alliance treaty also states that it is “to remain in force indefinitely,” regardless of whether there is war with the North or not. Finally, there are also plenty of countries that welcome the protection of U.S. troops even though they are not at war with anybody, as in the case of NATO. South Korea and the United States can similarly discuss the mutually acceptable level of troops and the appropriate burden-sharing.

Making peace with the North does not mean giving up on denuclearization either. The two are simply legally distinct questions. The peace can was being kicked down the road for decades before North Korea even had nuclear weapons. Conversely, the sanctions meant to enforce disarmament are not dependent on the existence of a state of war on the Korean Peninsula. It is perfectly possible to conclude peace as an end in itself and simultaneously maintain sanctions to push North Korea to give up its nuclear weapons. Given how unlikely denuclearization is—and frankly how harmful the sanctions are to ordinary North Koreans—both sides will probably settle on an in-between of partial denuclearization for partial sanctions relief as the new normal.

The world is very different from when the United States decided to intervene in the Korean civil war. Back then the point was to contain Moscow’s influence, and perhaps some even dreamt of using Korea as a springboard to roll back communism in China. Today it is much less clear why the United States would want to expose itself and its allies to nuclear war with a small and poor country that keeps asking for peace. It cannot be to contain China, because all this war does is push Pyongyang further into Beijing’s arms. Then why remain at war, if not simply the mindless inertia of history?