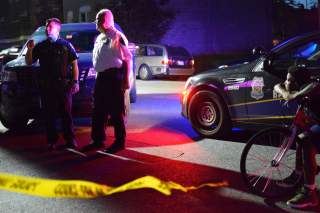 Baltimore is a city standing on the precipice, a city in crisis. The vibrant “city of neighborhoods,” home to the Star Spangled Banner, notables such as Edgar Allan Poe, Frederick Douglass, Babe Ruth and cultural legends like James “Eubie” Blake, Billie Holiday and John Waters has recently become known more for something much more ominous. Baltimore has become the murder capital of the United States.

The city attained this unenviable distinction after statistics showed that it suffered the highest per-capita homicide rate in the entire nation. The surge of increasing violence has permeated the streets, making the long-suffering residents of some of the most disenfranchised areas in the city virtual prisoners in their own homes.

While the effects of this violence are painfully obvious, the causation is varied and disproportionately affects young people of color. Poverty and the lack of employment opportunities, the absence of educational and housing opportunities, and easy access to illicit guns, have plagued policymaking efforts in Baltimore for years, making it appear virtually impossible to affect any real change and creating a vicious cycle. Another arguable component of the recent surge in violence is a lack of a coherent, well managed, and supervised strategy by the embattled Baltimore Police Department—an agency operating under a hovering cloud after several highly publicized failures.

Following the death of Freddie Gray in 2015, Baltimore invited the Department of Justice to investigate the agency and its relationship with the community. The DOJ report cited widespread discriminatory and unconstitutional police practices, especially in poor black neighborhoods. In response to the DOJ report the city, the police department, and the DOJ Civil Rights Division negotiated a consent decree, which included guidelines for how the department should engage those suspected of criminal activity, enhanced training for dealing with youth, people suffering from a mental illness, and protestors. It also calls for greater supervision and oversight within the agency.

Following the consent decree and the highly publicized (and ultimately failed) prosecution of six members of the police department in the death of Freddie Gray by Baltimore State's Attorney Marilyn Mosby, many insiders and observers noted a definitive lack of proactive policing. This coupled with the catastrophic and embarrassing federal discovery of a long-time criminal enterprise perpetrated by members of a formerly elite and highly decorated squad known as the Gun Trace Task Force (GTTF) did little to increase officer morale or public trust in the agency. Subsequent disclosures of rampant overtime abuses by the GTTF and others in the police department only added fuel to an already blazing fire. Part of the concerns expressed both inside and outside the agency was, how did such a rogue unit operate with such brazen impunity for so long without drawing the attention of varying levels of supervision? I firmly believe that the answer to this and many other issues within the police department boils down to a breakdown of checks and balances and supervisory oversight coupled with a top-heavy command structure. That command structure is far removed from the rank and file and it is either incapable or unwilling to come up with a comprehensive delineated plan for fighting crime. Now, consider the fact that Baltimore is bringing on a new police commissioner—the sixth since 2012 if you count interim Police Commissioner Gary Tuggle—and what you have is a troubled agency that is desperately in need of strong, innovative leadership. The question as to whether the new commissioner will be up to the difficult task ahead is a relevant one, and the answer to that is anyone’s guess, especially since he or she will be taking the captaincy of the Titanic in its last stage of buoyancy. Only the ship’s smokestacks are above water and its crew is either hanging on for dear life or piling into lifeboats.

The new commissioner will be taking over an agency that doesn’t appear to have a workable crime-fighting strategy, is suffering from horrible internal morale, and has a pervasive air of growing public mistrust. He/she must basically be a miracle worker who is able to bridge the ever-widening gap between the department and the community that it serves while attacking the burgeoning violent crime problem that is infecting the city’s streets. Is success even feasible given the obstacles? Various strategies have been employed in the past in Baltimore and other cities around the nation. “Zero tolerance,” a policy that has been recently touted by some and attempted before, has proven to be poisonous. It only scratches the surface of underlying crime while creating an angry and disenfranchised community. “Jump out squads” (plainclothes officers who roll up on a crowded corner in high-crime neighborhoods, surprising and accosting groups of standing people) have also been a popular policing method. The squads mostly use stop-and-frisk tactics (also known as the Terry stop) as a tool. Stop-and-frisk tactics were recently boisterously championed by the president as a solution to the violence in Chicago. This technique involves temporarily detaining, questioning, and at times searching civilians on the street for weapons and other contraband. Officers must have reasonable suspicion that a crime had been committed or that the person being frisked is in possession of a weapon. While this is a valuable tool for officer safety, it can damage police-community relations and result in claims of unconstitutional policing practices when it is arbitrarily used as a standalone crime-fighting strategy. This is a concern that was highlighted in the Department of Justice report.

Any crime-suppression strategy has the potential for catastrophic consequences for a law enforcement agency, especially if it is not coupled with a well-planned, well-managed and strictly supervised system of checks and balances. Baltimore, unfortunately, has not had such checks and balances and supervisory oversight in place for some time. It should be noted that previous plans have been successful. Between 2007 and 2012, Police Commissioner Frederick Bealefeld and Deputy Commissioner Anthony Barksdale teamed up at a time when the city’s murder rate was climbing, along with high arrest numbers that sparked complaints from the judiciary and civil-rights groups. Their tenure saw less than two hundred homicides in 2011 (the lowest in three decades) and arrests drop from more than one hundred thousand just six years before to about forty-five thousand. Stressing quality arrests over the quantity of arrests, the Bealefeld community-oriented style of policing was supplemented by Barksdale’s crime-fighting strategy, which merged targeted proactive enforcement with increased (and at times intense) accountability of command leadership through a program called Comstat. The program forced individual unit and district commanders to answer for any shortcomings and outright failures.

The point is, successful constitutional policing, police accountability, and a proactive strategy do not have to be mutually exclusive of each other. Baltimore leadership seems to fear targeted proactive enforcement and has instead leaned towards reactive measures that simply do little, if anything, to quell the violence. Placing empty squad cars in the street with flashing bar lights does not fool criminals. Perhaps it confuses the occasional speeder, but it does not deter the criminals. Pulling officers from their positions at headquarters and putting them on the street in areas that just experienced a rash of violence without a carefully planned strategy is little more than window dressing. While officers walk around aimlessly in a five-block area, the shooters will watch the parade and then shoot each other eight blocks away. Many rank and file uniformed officers now sit and await calls, running from job to job and writing reports. Why would they be proactive? With a constantly changing command structure that seems to be completely out of touch, rife with internal squabbles and unable or unwilling to draw up a blueprint for success, why would an individual officer or first-line supervisor take a chance? All police officers are cognizant of the inherent risks that they take daily, but when those risks are coupled with poor leadership, a lack of a cohesive plan, and a pervasive feeling that no one in upper management or Baltimore City Hall supports them, many of them start to feel like being proactive comes with not only physical risk but a risk to their careers and reputation. This is an issue that can only be correctively addressed by strong and competent leadership at the top, because as the ancient proverb states, “A fish rots from the head down”.

Now Baltimore is poised to hire a new police commissioner following the resignation of Police Commissioner Darryl De Sousa (who resigned after only three months after it was announced that he was facing charges of tax evasion) and interim Police Commissioner Gary Tuggle’s withdrawal from the hiring process. To compound the despair felt by many of the city’s officers and citizens, an outlandish scenario played out when the mayor of Fort Worth, Texas, reported on October 19 that Fort Worth Police Chief Joel Fitzgerald was taking the job, only to have to walk back that statement, explaining that she was reacting to an unconfirmed post on social media. Baltimore officials, who had been under fire for what many decried as a lack of transparency in the hiring process, would say nothing other than the fact that Fitzgerald was under consideration. With all of this, as of October 23, 2018, Baltimore had experienced forty-four murders in a thirty-day period with no end to the violence in sight.