Why Populists Are the New Elite 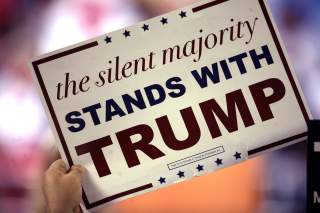 Populism has always bubbled beneath the surface of American politics. Periodically, it boils over, as in 1912 with Theodore Roosevelt’s Progressive Party, 1924 with Robert LaFollette, Sr., Huey Long’s “Share Our Wealth Movement” in 1934–35, and George Wallace, Pat Buchanan and Ross Perot in the late twentieth century. Populism, however, achieved its greatest prominence yet with the election of Donald Trump. And unlike previous periods in history, this movement — or at least widespread sentiment — could become a prominent and permanent fixture of the American political landscape.

The hallmark of today’s populism, as in the past, is the belief that powerful elites—big business, the media, Wall Street, Congress, Washington insiders and bureaucrats, and the rich—are exploiting and harming the common man through a rigged political and economic system.

However, where you stand depends upon where you sit. And I would argue that for the working poor and non-working poor, the real elites are today’s populists.

First, populists for the most part pride themselves on being “working class.” This should not be confused with “working poor.” As statistician Nate Silver has pointed out, Trump supporters had a median household income of $72,000, about 15 percent higher than that of non-Hispanic whites in America. And do I dare say that “working class” is as much (or more) a socio-psychological state of mind than it is a definition of income status.

Second, the working poor are the prime beneficiaries of the free trade deals that populists rail against. Take an inner city, divorced mother of three school-age children working two jobs to make ends meet. She thanks her lucky stars that she can outfit her children and herself at Target, Kmart, or Wal-Mart with affordably priced clothing imported duty-free from Central America. The blouse she can buy for $7.99 would cost triple that, were it manufactured in the United States. Free trade is about benefitting consumers, not members of the International Ladies’ Garment Workers’ Union. Recognizably, too, the less money spent on apparel means more money available for food, rent, and utilities.

Third, populists rail against welfare recipients and the “wasteful government programs” that support them. The Census Bureau’s Supplemental Poverty Measure shows that government programs not only work to reduce poverty, they are absolutely critical. As many as one in five Americans would be living in poverty without governmental help, mostly non-cash programs targeted at the working poor. The interests of big business and the poor are more aligned than those of populists and the poor. A capitalist economic system is designed to provide a win-win situation for both producers and consumers. For mass market companies that means providing affordable, accessible, high quality goods and services for the poor, not just the middle class.

The surge in populist sentiment in the United States during the last eighteen months should not come as a surprise. Over a third of the public is fearful, angry, and anxious and believes that they and the country are falling behind. They give Congress an eighteen percent approval rating, do not believe either political party responds to their needs and interests, and resent the trend of increased immigration (both legal and illegal).

Instead of laying blame on the traditional elites and the political system and turning to scapegoating as a palliative, working-class populists should sober up to the fact that we live in “the best of all possible worlds,” to paraphrase eighteenth-century German philosopher Gottfried Leibniz. Abundant energy and material goods and services, advancements in health, a myriad of options in education and training, technological improvements and a stable economic system should not be ignored or go unappreciated.

Populism has moved from the margin to the center in American politics. It has garnered an inordinate amount of media attention, and populists have made their voices heard in Congress. And they have succeeded in electing a candidate for president from one of our two major political parties.

Populists are now a new elite. But as Dutch political scientist Cas Mudde observes, populists, the self-appointed vox populi (voice of all the people), are intolerant and will attack those with a different view, claiming such as person represents “special interests,” and is therefore part of what they consider to be the elite.

Many in the working class see political participation as an avocation. The working poor are struggling yet happy just to have a vocation. Let’s hope the new elite (populists) spends less time bashing the old elite and more time advocating for greater economic opportunity for those less fortunate than themselves.

Jerry Haar is a Public Policy Fellow at the Woodrow Wilson International Center for Scholars, a Senior Research Associate at Georgetown’s McDonough School of Business, and a business professor at Florida International University.