Why Primacy Is a Bad Strategy for America 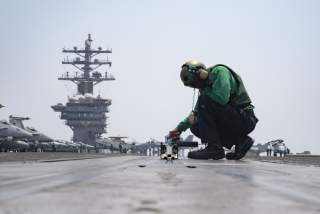 Primacy is a terrible, but as yet not very costly, national strategy. The pursuit of primacy was an easy, perhaps inevitable, step to take after the Cold War ended so abruptly and bloodlessly. We had a huge national-security apparatus, a global command structure, bases everywhere, lots of allies, and no serious competitors or even objectors to our intent to remain the dominant world power that the collapse of the Soviet Union had made us. At home, people worried about the consequences of dismantling much of our military quickly. Abroad, with the Gulf War victory, it was clear to all that we possessed superior military capabilities and had the ability to organize coalitions of diverse, even hostile, nations to enforce international principles compatible with our national interests.

The door swung open when we pushed. There had to be some order in the world. We were the world’s winners. Russia needed our economic help and couldn’t resist our international dominance. China, like the rest of Asia, wanted access to our market, and was preoccupied by its own problems. The Europeans were used to our leadership and willingly took more. Many in the Middle East sought our protection. And the American people, with the Cold War peacefully concluded, were accepting of the argument that aggression anywhere would eventually come to our shores and thus required an early American response. The received lesson of World War II was that the United States had to manage global security in order to remain secure itself. The happy ending of the Cold War appeared to show that we had the skill to do so and seemingly put us in charge of the world.

Domestically, both political parties saw a primacy-like strategy for America’s international role as desirable. For Republicans, international security was the strong card. The more the focus was on international issues, the better they would fare politically. For Democrats, there was a need to be comfortable again with the use of force two decades after Vietnam and there was a growing list of overseas wrongs that needed American leadership to fix. Instead of declining significantly after the end of the Cold War, the military budget provided politicians with a modest peace dividend to spend and bottomed out no lower than its Cold War average. The global command structure and most of the overseas bases and forces remained in place.

At first we flitted from one small crisis to another. The effort in Somalia caused casualties and was abandoned. Rwanda looked like trouble and was avoided. Haiti, as always, needed attention and got some. The Europeans mishandled the Balkans and were rescued. Iraq was continuously annoying. So too were North Korea and parts of the Middle East. Instead of guarding the Fulda and GIUK Gaps, troops and ships were sent on mini-adventures everywhere. But the costs were low. Hardly any accomplishments, but hardly any costs as well. It was all sort of low-level imperial policing without formally acknowledging the empire.

The 9/11 attacks changed things, but not by much. One crisis became absorbing. We began two wars and sent forces and bombed across the globe. It has been fifteen years of fighting, and we are still counting. But despite all this, we have suffered only about an eighth of the casualties that we suffered in Vietnam. There is no draft and no rioting in the streets. The dollar costs are measured in the hundreds of billions, but most of it is borrowed. Taxes went down, not up. Getting on a plane is more annoying now, but lots of us still do.

The pushback is not great. Islamic terrorism, it seems, is a reaction to Western culture more than it is to American dominance and policy. The terrorists kill Europeans as eagerly as they do Americans. Russia is obviously unhappy with the eastward expansion of NATO, a project that the United States has promoted, but is only slowly reacquiring enough military power to catch our attention. China is a growing military power, but focuses on things to very close to home and hasn’t been much of a threat. Primacy costs perhaps one or two percent of GDP in the form of needless military investment and deployments. This is much less than what we paid to fend off the Soviet threat. No one appears ready to take us on. Primacy is a contest we enter without a challenger. We are still number one, no matter how awful our performance.

Nevertheless, primacy is a bad national strategy. It diverts talent and resources from our domestic problems. We have not yet come home fully from a Cold War that is twenty-five years in the past. It is a strategy that allows our rich friends in Europe and Asia to free ride on the backs of our taxpayers, escaping responsibility for much of their own defense and their interactions with their neighbors. As World War II also teaches, we should be behind our allies, not in front of them. And although the pursuit of primacy doesn’t absolutely require it, possessing a globally deployed, very powerful military tempts meddling in the lives of many nations, nations that we can and often will walk away from when the going gets rough because their plight holds little real interest for us. Our power and presence discourage collective solutions to regional security issues, while offering none of our own.

This is the tenth in a series of essays on the future of American primacy. You can read the previous essay, “Europe, Britain and America’s Fading Primacy” by Freddy Gray, here.