Why Putin is Winning the Power Struggle With Navalny in Russia 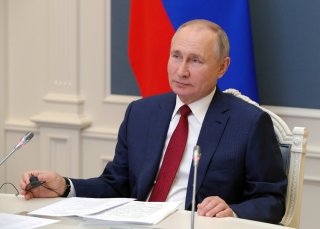 MOSCOW—As the Kremlin expels Western diplomats, Alexei Navalny’s team is calling protesters off the streets—and admitting its defeat against a Kremlin that learned the lessons of neighboring Belarus. After a call by Navalny’s team, thousands thronged the streets of Moscow last Saturday. As the protesters marched through downtown Moscow, bypassing cars began blasting “We Want a Change”—a song synonymous with the ongoing Belarusian protests and the protest movements that brought down the USSR. The mood was cheerful. Suddenly, scores of riot police appeared out of the night. It took them minutes to encircle the core of the protest--about an hour to pound the protesters up and detain them. The Moscow protest was dead several hours after its inception. Like many other demonstrators, Ruslan Dvorovsky, a middle-aged city councilman was driving in his car among the protesters who flooded Moscow roads. He told me: “Navalny’s sentence is a sentence for all of us.” Two days after the fiasco, Navalny’s second in command, Leonid Volkov, sealed the sentence, by announcing that there will be no more protests in the immediate future.

The 2021 Russian protests were markedly different from the Navalny protests in 2019 and 2017. They were grimmer. The usual Navalny protester is young, pro-Western, creative, and peaceful. They protested with imaginative bright posters and ironic symbols: one such symbol of the 2017 protests was a bright yellow rubber duckie. But this time the mood changed. There were few posters and few smiles. Those who got out on the streets understood the brutality of the possible response: over the years Russian laws changed to allow for harsher sentences and larger fines for protesting. A fifteen-year-old protester, identified as Kostya for safety reasons, told me “I am not afraid. I can tolerate this no longer.” He, like other young Russians, was born after Putin’s ascent to power and has never seen a “Russia Without Putin”—an extremely popular slogan among protesters.

The first protest after Navalny’s arrest simmered with protester violence unseen in Russia since the 1990s. A car with FSB license plates was attacked and the driver was injured, an anti-Navalny demonstrator was brutally beaten, some protesters fought the riot police, and so on. Met with excessive brutality from the Russian security services, protesters didn’t waver and stayed on the streets until late at night. A potential full-on violent protest akin to the Euromaidan in Ukraine or the Black Lives Matter protests in the United States was in the air. A twenty-seven-year-old anarchist protester, who asked to identify as Ivan out of safety concerns, told me that “there were those who wanted blood...they weren’t the majority, but there were none of them before [on earlier Moscow protests in 2017 and 2019].”

However, Navalny organisers blew the opportunity for a real uprising and were ultimately unsuccessful in managing a peaceful protest. Navalny Telegram channels kept spreading the protest thin, calling upon the demonstrators to move around their cities, especially in Moscow, thus breaking up the huge groups of people and making them easy prey to the motorized riot police. Instead of following the example of the Euromaidan or Tahrir Square or Gezi Park, they were seemingly inspired by the constantly moving marches of Belarus. Indeed, many organizers like to draw inspiration from the western neighbor. Still, Minsk protests mobilized 10 percent of the population, while on the 23rd, Navalny adherents could only attract 0.25 percent of Muscovites, according to Artyom Shraibman, a scholar at the Carnegie Moscow Center.

The second big protest proved even more disastrous. A record number of people, over 5,000, were detained, and the protesters were unable to hold any ground whatsoever. In Moscow, the rallying point was changed at least five times during the march that didn’t help the protest’s logistics. I was in Moscow's march that day and saw the visible confusion around me. I myself received a few blows while reporting. Just like in Belarus, the regime was unimpressed with the peaceful protests. No concessions were made, officials ignored the protests and pro-regime media cheered the repressions on. There is every indication that the Kremlin learned from Belarusian President Alexander Lukashenko’s example.

Why were the Russian and Belarusian protests unsuccessful in shattering their regimes? It’s because getting people onto the streets is only the first step. Timothy Garton Ash, a professor at the University of Oxford who studied civil resistance in Eastern Europe since the collapse of communism, notes that authoritarian regimes learned two things from revolutions of the past: “ruthlessness and a skill set for managing [protests]”. Garton Ash also pointed out that  “[a regime] can actually live with people letting off steam on the streets for quite some time...as long as it doesn’t become politically threatening.” Garton Ash argues that for a peaceful protest to be successful, it needs “a clear opposition strategy around achievable goals… simply saying ‘Russia Without Putin’ is not a strategy.”

Why were the protests relatively small, once the size of the Russian population is taken into account? Some view Navalny as a symbol rather than a politician. For Alexey Vasilyev, a famous photographer from the Russian region of Sakha, Navalny is simply a symbol that’s “too big to be ignored.” Many don’t even like Navalny—a young labor organizer who asked to be identified as Jakir, out of fear for his safety, said: “We think that we need to democratize our economy, take our factories out of the oligarchs' hands. This is our principal difference.”

Navalny backers faced one of the most sophisticated modern autocracies. Russian security services often simply outnumbered protesters. They are armed with the best equipment—especially in Moscow—and are motivated by relatively high wages. Major cities are also equipped with sophisticated facial recognition and surveillance systems completely under the security apparatus’ control.

Navalny’s team is promising a rematch in the spring, but many are skeptical. Jakir, who was organizing during both Belarusian and Russian protests, told me that it is “doubtful whether a wave like this will rise in the spring.” Navalny’s team is hoping for an international pressure campaign on the Kremlin. However, Moscow seems emboldened, as it has announced the expulsion of diplomats from Germany, Sweden, and Poland who it says attended Navalny protests. For now, the Putin regime appears to have the upper hand.

David Saveliev is a journalist and a graduate student at the University of Oxford’s Russia and East European studies program. He specializes in protests and revolutionary politics.