Why Putin's Plan for Russia Will Work 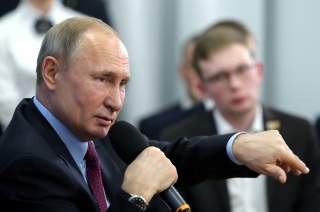 Russian president Vladimir Putin has attracted much attention for proposing changes to the constitution that would guarantee his security after he resigns from the position of president. His decision has aroused much speculation about his motives. But what he is proposing is really an enormous institutional and constitutional restructuring of Russian branches of power. He wants the State Duma to control the government more closely and have the authority to approve the prime minister, all of the deputies, and all of the federal ministers. And although Putin may appear to be solely pursuing his own goal of personal security, he will also eventually create a more democratic country.

History suggests that Putin’s actions are not a complete anomaly in Russia. If we apply the term “Tsar” to all Russian leaders, then we must recognize that Nicholas II stepped down from his throne in 1917 by himself (although under strong pressure) and that Mikhail Gorbachev and Boris Yeltsin also yielded their powers willingly.

It almost goes without saying that the road to a politically realistic road in Russia is often a tortured one. Let me explain. In my view, the course that events have often taken in Russia is based upon the following idea: institutional arrangements are predetermined by our cultural capital, which in turn is shaped by our Russian Orthodox religion. The Orthodox mentality is inclined to think about our national qualities and properties in vague, abstract, and universal terms. This often renders it difficult, if not impossible, to measure political actions in rational units. We Russians are not the Belgians or the Dutch, who only seek to enjoy material well-being. Russians need higher stakes—a universal mission. Our internal political discourse is therefore often deeply flawed.

Today, Russians are inundated by all sorts of hypertrophied declarations and statements. And I must admit, most Russians feel privileged to be treated as a spiritual nation at the expense of rationality. It is notable that Putin has never promised anything specific during his election campaigns. Indeed, has not felt pressured to tout specific achievements during his previous term. Rather, he has focused on talking in abstractions when describing the next term.

The less concrete and measurable the promises of politicians become, the more the radius of trust shrivels in society. This is why no one trusts mere words and phrases; this is why no one wants to surrender power. Also, a negligible circle of trust affects the desire of the populace to pay taxes. Nobody believes that their taxes will go toward health or educational projects. Instead, the suspicion is that they will be used for projects like military operations in Syria or East Ukraine.

Putin’s attempt to realign constitutionally important institutions of power does represent a positive step for modern Russia. His approach represents a break from the past not because he is looking to cede power, but by the means that he is employing it. Putin appears to be an institutionalist rather than a personalist, at least when it comes to contemplating the future of his political circle. In shaping Russian domestic and foreign policy, he tends to ignore institutional approaches. But when it comes to his and his friends’ abstention from power, he seems to have arrived at the belief that they can only rely on the safety provided by an institutional framework.

After Putin has left the political stage, Russia’s important institutions will have much more dignity and ambition. Currently, opposition parties are centered around their leaders that lack name recognition. It is impossible for no-name contenders to win constituencies. The only way to demolish Putin’s proposed new constitutional power structure would be through a revolution, a path that has seldom proved beneficial for Russia.

For now, Putin is focused on maintaining economic development to ensure stability in Russia. This is why he has dismissed various ministers and his allocation of trillions of rubles from the state reserve fund to boost the economy. The paradox of our age is that an authoritarian leader, at least in Russia, is able to establish a viable system of government that relies on checks and balances. This is something that a liberal leader under similar circumstances could not do.

Konstantin Remchukov is an authority on Russian politics and the proprietor and editor-in-chief of Nezavisimaya Gazeta, an influential daily newspaper.