Why Qatar and Turkey Can't Solve the Crisis in Gaza 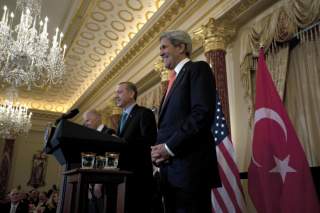 With Washington desperate for a cease-fire between Israel and Hamas, and with Egypt having flamed out as a broker of calm, two of Hamas’s top patrons are about to be rewarded with a high-profile diplomatic victory. U.S. and Israeli media are now reporting that the White House may be looking to Qatar and Turkey to help negotiate an end to the hostilities. Qatar, in fact, held a high-profile cease-fire summit in Doha on Sunday that included Palestinian Authority president Mahmoud Abbas, UN Secretary General Ban Ki Moon, the Norwegian foreign minister, and Hamas leader Khaled Meshal.

No progress was reported on Sunday. But using the good offices of Qatar is a huge mistake. The same goes for Turkey. In exchange for fleeting calm, the United States will have effectively given approval to these allies-cum-frenemies to continue their respective roles as sponsors of Hamas, which is a designated terrorist group in the United States.

Since a visit to Turkey by Qatar’s ruler Tamim bin Hamad Al Thani, and amidst reports that Meshal has been shuttling between the two countries, Doha and Ankara have been floating terms of a joint cease-fire proposal that would reportedly grant Hamas significant benefits. Specifically, the deal would grant Hamas an open border in Gaza that would allow the group to continue to smuggle rockets and other advanced weaponry at an ever alarming pace.

The Israelis see this as a nonstarter. But the White House is nevertheless working the phones with Qatar and Turkey to see if a deal can be struck.

Since the war broke out in early July, Secretary of State John Kerry has reached out at least three times by phone to Turkey’s Foreign Minister Ahmet Davutoglu and six times to his Qatari counterpart, Khalid Al Attiyah (Kerry’s Mideast chief boasted last month that the secretary of state “is in very constant contact” with FM Al-Attiyah and even “keeps his number on his own cell phone”). Kerry was also expected to visit Qatar before Egypt’s aborted cease-fire proposal.

It is by now no secret that Qatar has emerged as Hamas’ home away from home and ATM. Shaikh Tamim’s father, Hamad bin Khalifa Al Thani, visited Gaza in 2012 when he was still the ruler of Qatar, pledging $400 million in economic aid. Most recently, Doha tried to transfer millions of dollars via Jordan’s Arab Bank to help pay the salaries of Hamas civil servants in Gaza, but the transfer was apparently blocked at Washington’s request.

Since 2011, Qatar has been the home of the aforementioned Khaled Meshal, who runs Hamas’s leadership. During a recent appearance on Qatar’s media network Al Jazeera Arabic, Meshal blessed the individuals who kidnapped and ultimately murdered three Israeli teenagers. He boasted that Hamas was a unified movement and that its military wing reports to him and his associates in the political bureau. American officials have revealed that Qatar also hosts several other Hamas leaders. Israeli authorities reportedly intercepted an individual in April on his way back from meeting a member of Hamas’s military wing in Qatar who gave him money and directives intended for Hamas cells in the West Bank.

Israeli and Egyptian officials report that Qatar is so eager for a political win at Cairo’s expense that it actually urged Hamas to reject the Egyptian cease-fire initiative last week. Doha is also using its vast petroleum wealth to striking diplomatic effect: one UN official source suggests that UN Secretary General Ban Ki-Moon would not have made it to Doha for cease-fire talks on Sunday if the Qataris hadn’t chartered him a plane out of their own pocket.

Turkey, for its part, has emerged as one of the most strident supporters of Hamas on the world stage. Turkish Prime Minister Recep Tayyip Erdogan has vociferously advocated for Hamas while his government has found ways to donate hundreds of millions of dollars in aid to Hamas, mostly through infrastructure projects, but also through materials and reportedly even direct financial support.

Turkey is also home to Salah Al-Arouri, founder of the West Bank branch of the Izz Al-Din Al-Qassam Brigades, Hamas’ military wing. He reportedly has been given “sole control” of Hamas’s military operations in the West Bank, and two Palestinians arrested last year for smuggling money for Hamas into the West Bank admitted they were doing so on Al-Arouri’s orders. He is also suspected of being behind a recent surge in kidnapping plots from the West Bank. An Israeli security official recently noted, “I have no doubt that Al-Arouri was connected to the act” of kidnapping that helped set off the latest round of violence between the parties, which has seen hundreds killed and thousands wounded, nearly all of them Palestinians.

Al-Arouri, it should be noted, was among the high-level Hamas officials who met with the amir of Kuwait on Monday to discuss cease-fire terms (he is pictured in the middle of the couch here).

So as Washington considers cutting a deal brokered by Qatar and Turkey for an end to the latest round of hostilities, it bears pointing out why these two countries are so influential with Hamas in the first place: because they empower the terrorist movement and provide it with a free hand for operations. A cease-fire is obviously desirable, but not if the cost is honoring terror sponsors. There must be others who can mediate.

Interestingly, both Ankara and Doha count themselves among America’s friends. But their support for terrorist entities—not just Hamas—has become so obvious that U.S. legislators began to send concerned letters to officials from both countries last year. This alone is a sign that America must set the bar higher for the behavior of its allies and not reward them for bad behavior.

David Andrew Weinberg, a former Democratic Professional Staff Member at the House Foreign Affairs Committee, is a Senior Fellow at the Foundation for Defense of Democracies.

Jonathan Schanzer is Vice President for Research at the Foundation and a former intelligence analyst at the U.S. Department of the Treasury.