Why the Quad Should Focus on a Strategy to Contain China 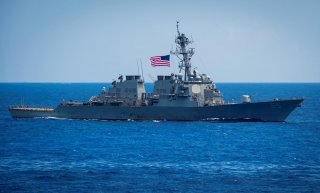 China grumps that the Quad, a league of like-minded Indo-Pacific democracies, is an “Asian NATO” or “mini-NATO” hellbent on “containing” China.

Now, Beijing is not entirely wrong to liken the Quad to the North Atlantic Treaty Organization. Quad governments—representing India, Australia, Japan, and the United States—sometimes do things reminiscent of the Atlantic alliance. For instance, the four Quad navies just finished up with this year’s Malabar exercise in the Arabian Sea, showing they can work together and push back as China tries to make itself a serious if not dominant player in the Indian Ocean region. NATO navies commonly maneuver together, casting a counterweight to Russian ambitions in the Atlantic Ocean and adjacent seas.

But one of these things is not like the other. In reality, the Quad is a loose consortium, not a standing alliance anchored by a collective defense treaty. The arrangement bears more resemblance to the pre-World War I “entente cordiale” than to NATO. In April 1904 the French and British governments signed a series of agreements settling long-standing colonial quarrels. Setting aside centuries of on-again-off-again enmity, the two democracies drew together against the common danger manifest in autocratic Germany.

Kaiser Wilhelm II and his lieutenants repeatedly sought to break the entente in ensuing years, yet their bellicose diplomatic methods only cemented it. French ally Russia ultimately joined in, and the “Triple Entente” was on. As a result, a coalition—not a formal alliance—squared off against imperial Germany and its allies in 1914. Pre-war European alliance politics should come as cold comfort to Beijing. It shows that an overbearing power can prompt its opponents to make a common cause even when no mutual defense accord binds them to do so.

It also shows they can win.

NATO itself is something of an anomaly, as indeed is the array of alliances the United States has headed since 1945. Namely, the protracted strategic competition known as the Cold War lurched into being during the immediate aftermath of a system-shattering global war. The victorious World War II allies fell out against one another in the months after peace came. The Iron Curtain descended across Europe while America sought to rally the noncommunist world to oppose Soviet expansionism.

The anomaly is this. U.S. forces were already on the ground in war-stricken parts of the world, helping enforce the peace and reconstruct devastated countries. Allies did not invite America to construct and garrison bases on their soil during peacetime. That would have been a tough sell with host governments and peoples. U.S. forces came as conquerors; they stayed to hedge against fresh aggression. Facts on the ground simplified the challenge of forging Cold War alliances.

In a real sense, then, U.S. containment strategy was an artifact of World War II.

Lord “Pug” Ismay, the first secretary-general of NATO, encapsulated the alliance’s rationale breezily but accurately: its reason for being was to keep the Russians out, the Americans in, and the Germans down. Keep being the keyword. The Americans were already in; they did not have to be invited in. That made it politically easier for allied governments to ask them to stay, helping keep the Soviets behind the Iron Curtain and hold down new militarism in Germany.

The American presence was the status quo—not some radical break from the status quo. And it’s easier to defend an established status quo than to disturb one.

Similar logic held in Asia, where the defeat of Japan splintered the Japanese Empire into its constituent parts, many—including Japan itself—under direct U.S. military occupation. The U.S.-Japan security alliance was a kind of bilateral NATO meant to keep the Russians and Chinese out, the Americans in, and the Japanese down. South Koreans didn’t need to be kept down. After being ravaged by World War II and the Korean War, though, they consented to a strong U.S. military presence to keep North Koreans and their communist backers out and Americans in.

Lord Ismay’s quip furnishes a powerful instrument for evaluating U.S.-led alliances past, present, and future. That instrument indicates that the Quad stands apart from long-standing alliances. The United States is not an occupying power in Quad members. Its presence in Japan long ago evolved into a mutual arrangement. Indeed, the U.S.-Japanese duo is more an alliance of equals by the day.

Australia is arguably America’s closest friend on the planet yet remains reluctant to permit a standing presence that might entangle Canberra in adventures it prefers to avoid. The Australian government does allow U.S. Marine contingents to deploy to the northern harbor of Darwin on a rotating basis. Still, the situation bears scant resemblance to Europe or East Asia during the early Cold War.

And India? Fuggedaboutit. New Delhi pioneered nonalignment during the Cold War. It had an occasionally fraught relationship with the United States (and a cozy one with the Soviet Union) whose legacy the partners are only now transcending. And a tradition of autonomy is etched on Indian strategic culture. India regards itself as a benign hegemon over the Indian Ocean region. No hegemon readily submits to an alliance headed by outsiders, let alone allows outsiders to establish a standing military presence on its territory. Only under extreme duress would New Delhi break with strategic autonomy.

The Quad is no NATO.

The Quad is an option. It lays the groundwork for multinational operations should Quad leaders choose to avail themselves of that option, while not committing them to collective ventures from which they choose to abstain. Exercises like Malabar acquaint the partners with one another’s hardware, procedures, tactics, and cultural quirks. They build “interoperability,” or even “interchangeability,” between particularly close partners. Capability accumulated during peacetime does not have to be invented on the fly during wartime.

What is that option for? Here it’s worth parsing China’s “containment” metaphor. Containment, of course, is a Cold War term. According to George F. Kennan’s iconic diagnosis of the Soviet challenge and his prescribed remedy, resisting communist expansionism would deprive Marxism-Leninism of its motive force over time. If denied the ability to claim that communism stood at the vanguard of history and was sweeping the globe, Moscow and fraternal governments would mellow over time. They might fall.

Containment was both a policy and a strategy. As a policy, it does not fit contemporary China. Apart from being a big, ambitious, often domineering power, China today is not the Soviet Union circa 1949 when the North Atlantic Treaty—the Atlantic alliance’s founding document—was signed. Beijing does not appear intent on subverting or overthrowing foreign governments and turning them communist. It is economically intertwined with the noncommunist world to a degree unimaginable for the Soviet Union. Policy vis-à-vis China is something different and merits a different title.

As a strategy—in particular a military and naval strategy—containment is a fitting metaphor. This is clearest in East Asia, where the U.S. armed forces are reconfiguring themselves to fight among the islands, denying China’s navy and air force control of sea and sky. This approach comes straight out of the Cold War playbook, from the days when Secretary of State Dean Acheson called for making the first island chain America’s “defensive perimeter of the Pacific.”

The approach applies in the Indian Ocean as well, albeit in a fashion that is more scattered and not so visually striking when plotted on the map. Curbing Beijing’s effort to gain military access to Indian Ocean seaports is itself a way to contain China’s martial reach—and one well worth pursuing.

Quad members may shy away from the containment metaphor, and that is understandable. They mainly need to be precise when explaining their purposes and how they intend to put power to work attaining them. That means being circumspect about the terms they use to describe China policy. But they should own it on the military side.

Let’s dust off the Cold War playbook—and be candid about it. Lord Ismay would smile.

James Holmes is J. C. Wylie Chair of Maritime Strategy at the Naval War College. His books have been named to the U.S. Navy, Marine Corps, and Indo-Pacific Command Professional Reading Lists. The views voiced here are his alone.