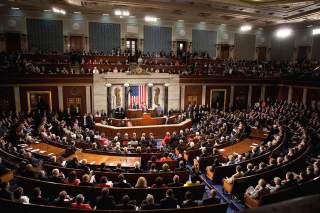 The Republican plan to transform the federal government presents the most significant opportunity in two decades to return the party to the traditions of small-government conservatism.

In recent years, however, even as the case for limited government became increasingly obvious, small-government Republicans have been on the defensive. A succession of failed military interventions did little to turn Republicans against a $600 billion defense budget. And entitlement reform and Veterans Affairs cuts remain “third rails” in the face of a $20 trillion U.S. deficit.

It was only two decades ago that small-government Republicans were gaining momentum. The country was ready for a post–Cold War peace dividend and a bipartisan coalition managed to reduce defense spending from six percent of GDP to three percent. In 1994, the Contract with America delivered Congress to a Republican Party promising rollbacks in federal power. The following year, the House passed a budget plan calling for the elimination of three cabinet agencies—Commerce, Education and Energy—along with over 200 government programs. By fiscal year 1997, welfare reform was signed into law and close to 200 government programs were eliminated.

The small-government push of the early 1990s, however, proved short-lived. During Clinton’s second term, congressional Republicans tired of government downsizing. Between 1997 and 2000, the Republican-controlled Congress abandoned Medicare reform and approved an increase in discretionary spending $30 billion more than the Clinton administration’s request. The 95 programs slated for elimination in the Contract for America actually grew by thirteen percent. And these budget hikes were a mere harbinger of things to come. By the end of the George W. Bush administration, the federal budget grew by 53 percent—an increase that exceeded the Lyndon Johnson years.

Nor did bailouts, Obamacare or the Iraq War cure the Republican penchant for government. In 2016, the Republican nominee promised spending hikes on veterans’ healthcare, defense, infrastructure, childcare, and border security—all without changes to Social Security and Medicare. Were the Trump administration to enact its campaign promises, Moody’s Analytics forecasts, even on a static basis, close to $1 trillion of additional deficits by the end of its first term.

The road to big government Republicanism is certainly paved with pandering and political expediency. Think Dick Cheney’s gloat that “deficits don’t matter” or Ohio governor John Kasich’s pronouncement that “single women with children are the real heroes in America.” And perhaps it’s true that the Republican Party wouldn’t have embraced government expansion to the same degree but for unforeseen crises like 9/11 and the financial crisis.

The reality, though, is that neither cynicism nor black swans explain the decline of small-government conservatism. At virtually every juncture when small-government conservatism was presented to the voters, the Republican base rebelled. The Bell Curve drew national attention to the pitfalls of the welfare state, but when it came time to formulate a winning message for the Republican primaries, Texas governor George W. Bush turned not to Charles Murray, but to the more obscure evangelical academic Marvin Olasky. Greater government intervention, Olasky argued, guided by “compassionate conservatism,” could “transcend the root problems that currently oppress too many deserving Americans.”

Nor did the Tea Party scale back government. Far from enacting its “Contract from America”—a Dick Armey–inspired, 1990s redux calling for a federal balanced budget amendment, statutory cap on federal spending, and across-the-board tax relief—the Tea Party fizzled out before making a real dent in the size of government.

Even in the reddest states, Republican governors have been punished for cutting government. In Louisiana, Bobby Jindal proposed the deepest higher education cuts of any state in the country, $200 million cuts in health care, and up to a 20 percent reduction in state agency budgets—all alongside $1.1 billion of tax relief. Bayou state voters responded by passing a constitutional amendment that made it all but impossible to cut the state’s Medicaid budget. By November 2015, Jindal’s approval ratings plummeted to 20 percent; depths not even reached by George W. Bush after Hurricane Katrina. A similar story can be told of Sam Brownback, who pushed through one of the largest income tax cuts in Kansas’ history, along with welfare reform and sweeping cuts in education and government services. In November 2015, Brownback’s approval ratings fell to 26 percent, giving him the dubious distinction of America’s least popular governor.

To understand Republican resistance to small government, one must look at the upheaval that has swept red America since the mid-1990s. Three interrelated trends have decimated support for limited government among Republican constituencies.

One is the rise of broken families. From 18 percent in 1996, the white out-of-wedlock birth rate has jumped to over 29 percent. These numbers, alarming as they are, obscure the scale of the crisis in the Republican heartland. In their 2006 study of U.S. demographic trends, University of Michigan sociologists Ron Lesthaeghe and Lisa Neidert stumbled across a “striking finding.” While American fertility trends generally mirror those in the industrial world, the Bible belt, spanning the Midwest, Great Plains and South, stands out as a home of “teenage childbearing, young lone mother families, and higher divorce rates.”

What's behind the high rates of family breakdown in Republican regions of the country? More so than socioeconomic hardship, a 2014 analysis by social scientists Jennifer Glass and Philip Levchak points to conservative Protestant culture. Glass and Levchak determined that “community norms” and “social institutions” among conservative Protestants are putting overwhelming pressure on the traditional family.

Conservative Protestant identity creates a cultural bind to the GOP, but, in fueling the social pathologies that accompany family breakdown, also exacerbates government dependency. New single-parent families with children cost the state up to $112 billion a year in divorce-related social-service subsides and lost revenue. Child poverty, for example, is four times higher in single-parent households than in two-parent families. The push for public assistance that family breakdown accelerates, Brookings scholar Isabel Sawhill observes, “is a hugely expensive proposition . . . inconsistent with a public ethic that values self-sufficiency over dependency.”

Another trend is a growing health crisis among working class whites. After falling for three straight decades, mortality rates for white Americans between the ages of 22 and 56 began to increase in 1999. These setbacks vary widely across educational and regional divides. While middle-age mortality rates fell among the college educated, those with a high school degree or less saw a sharp increase in death rates. For younger whites, death rates since 2009 rose by 23 percent among those without a high school education, compared to just four percent among the college educated. All seven states that experienced a gap between actual and expected morality in 2014 were in the south, while states with improvements in the mortality rate were mostly in the northeast.

Declining health outcomes, unsurprisingly, are increasing demand for government-sponsored health care. Already, at least 20 percent of entitlements go to the disabled. Princeton University economists Anne Case and Angus Deaton argue that the worsening state of white lower class health standards helps explain the recent growth in Social Security Disability Insurance as well as the decline in labor force participation. Indeed, it was not until the passage of Obamacare that a long-standing decline in health insurance coverage among middle-aged whites reversed.

Finally, the Republican Party has seen an ideological shift away from cosmopolitan liberalism toward nationalism. A 1994 study on American nationalism found that “cosmopolitan liberalism” was the “dominant outlook” and “relative bedrock” of American society. Although the survey found a “noticeable acceptance” of nativist ideas on a small subset of issues, Americans by and large remained committed to individualistic ideals, and expressed confidence in the country’s ability to assimilate newcomers. Cosmopolitan liberalism informed market economics at home and a foreign policy congenial to free trade and the “active diffusion of democratic capitalism abroad.”­ This brand of national pride was strong, but “not ideological in nature" and “no stronger among conservatives than liberals.” Today, more exclusionary varieties of nationalism prevail in the Republican Party and provide the political backdrop not only for high levels of defense spending, but also for the mainstreaming of large-government “economic nationalism.”

Trends in family breakdown, health and nationalistic views help explain unprecedented rates of government dependency. The problem isn’t just “lonely Julia” and “pajama boy”; government dependency is now the norm among white Americans, who receive more than their proportionate share of entitlements. These trends show why the number of households getting federal benefits has jumped from less than 40 percent in the mid-1990s to nearly 50 percent today, and why 60 percent of Americans take more in government benefits than they pay in taxes.

Ten years ago, the Cato Institute posed an uncomfortable question: Could the GOP and limited government have a future together? The debate appears to be settling in the negative. But if the Trump administration and its congressional allies can move quickly on government reform, perhaps they can upend it.

Pratik Chougule is the managing editor of the National Interest.