Why Rex Tillerson Has the Right Stuff 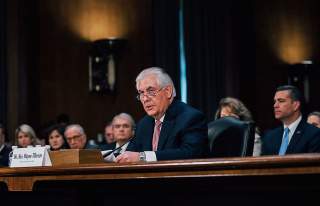 Few qualities carry more weight in business or diplomacy than credibility. Whether the subject is a complicated business deal or an international crisis, the expectation of each party that the other will deliver on its commitments is critical to the durability of agreements and treaties. The absence of such credibility creates uncertainty and suspicion, which often leads to breakdowns. As the CEO of Exxon Mobil, Rex Tillerson understood that the strength and reputation of his firm were based on a corporate ethos that made credibility a cardinal virtue.

Having been a foreign service officer based in the U.S. embassy in Moscow in the 1990s, and an employee of Exxon Mobil Russia a decade later, I was able to observe this ethos in practice. The company’s flagship operation in Russia, the Sakhalin-1 oil and gas project, has been an example of engineering prowess in a challenging and environmentally sensitive arctic environment. The agreement under which it operates was the result of years of tough negotiations. Once the agreement was signed in 1994, Exxon went to work, confident that the legal safeguards built into the agreement would align the interests of both parties.

The multibillion-dollar project was executed flawlessly, and oil began to flow in 2006. Operations ran so smoothly that the Russian government inspectors who monitored the project were occasionally frustrated at their inability to find technical violations. Such meticulous compliance with the commitments that Exxon Mobil, and Tillerson personally, had undertaken established credibility with the Russian government.

Before long Gazprom—Russia’s gas behemoth—cast a covetous eye on Sakhalin-1’s substantial gas reserves, Exxon Mobil was on the cusp of signing a long-term gas contract with China. Gazprom was loath to allow a foreign company, much less an American one, to be the first to sell Russian gas to that lucrative market. Gazprom had already forced another major consortium led by Shell to sell half of its equity in the adjacent Sakhalin-2 project, and the company now demanded that Exxon Mobil sell its gas to them at a bargain price.

The credibility factor came into play when Exxon Mobil calmly informed Gazprom that the company had the right and obligation to sell the gas for the best price, in compliance with its duty to shareholders and to the Russian treasury, which shared in the proceeds. Gazprom’s repeated attempts to intimidate Exxon Mobil were met with steely resolve. When, at Gazprom’s behest, the Russian legislature passed a law that gave Gazprom sole export rights, Exxon Mobil pointed out that there was no provision in its contract that compelled it to sell the gas; the company would simply recycle it until better terms were presented.

Exxon Mobil’s vigorous defense of its contractual rights gained it respect in Moscow. Exxon Mobil eventually struck a deal with state-controlled Rosneft—itself in conflict with Gazprom—on construction of an LNG export facility that would circumvent Gazprom’s monopoly.

Any Russian doubts about Exxon Mobil’s credibility were dispelled when the company’s major investment in Venezuela came under pressure from the late President Hugo Chavez. Chavez ordered foreign oil companies in Venezuela to reduce their ownership of projects to no more than 40 percent, and to turn over operational control to national oil company PDVSA. Exxon Mobil, operator and 60 percent owner of a major oil project, was in Chavez’s sights—and Chavez was adamant.

Tillerson rejected those terms and handed over the project to PDVSA in good order. No sooner did Exxon Mobil leave Venezuela than it filed lawsuits seeking compensation in New York, London and The Hague. This froze most of PDVSA’s foreign assets, including the U.S.-based Citgo. Exxon Mobil’s forceful defense of its interests was noted in Moscow, where even a Gazprom official told his Exxon Mobil counterpart that such robust legal action was gutsy and “cool,” according to a source.

Exxon Mobil’s subsequent strategic partnership with Rosneft in 2011 (after an abortive BP-Rosneft deal) was undoubtedly the result of Exxon Mobil’s and Rex Tillerson’s credibility. The Russians wanted a partner for complicated Arctic Sea projects that would deliver on its commitments. For his part, Tillerson made it clear that he would hold the Russians accountable for their end of the deal.

While the duties of a corporate CEO and a secretary of state differ, the credibility factor is common to both positions. When a secretary of state speaks on behalf of U.S. interests it is his or her credibility that matters, both with respect to fulfilling U.S. commitments and to holding other countries accountable for theirs. Rex Tillerson has demonstrated his understanding of the importance of credibility, an understanding that has been lacking in U.S. foreign policy of late.

Edward S. Verona is a senior advisor at McLarty Associates. He is also the former president and CEO of the U.S.-Russia Business Council (2008–2013).