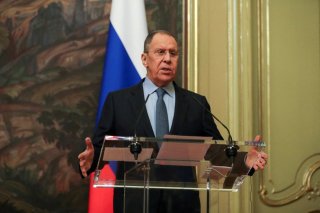 Russia has narrowly averted what could have escalated into a full-fledged diplomatic crisis with Israel, one of the major states to chart a neutral course throughout the war in Ukraine.

Russian foreign minister Sergey Lavrov was pressed during an appearance on Italian television last week to provide a justification for Russia’s ongoing invasion of Ukraine. “So what if Zelensky is Jewish? The fact does not negate the Nazi elements in Ukraine,” Lavrov said. “I believe that [Adolf] Hitler also had Jewish blood. It means absolutely nothing. The wise Jewish people said that the most ardent antisemites are usually Jews. Every family has its black sheep, as we say.”

Brash as they may seem to international audiences, Lavrov’s comments were well within the mainstream of Russian discourse. Russia’s political establishment has maintained for years that Ukraine is a Nazi state that is not just espousing but pursuing eliminationist policies against its Russian-speaking minority. Polling has consistently revealed that these attitudes enjoy widespread support among the Russian population; according to a recent survey conducted by the Russian Public Opinion Research Center, 76 percent of Russians believe that “Ukrainian nazi organizations” pose a threat to Russia. It is not controversial in Russia that Ukrainian president Volodymyr Zelenskyy, despite his Jewish roots, has appeased and collaborated with Ukrainian Nazis as they committed alleged acts of “genocide” against the pro-Russian separatist Donetsk and Luhansk People’s Republics (DPR and LPR) to Ukraine’s east.

But Israel is among the many governments that do not share Lavrov’s assessment of Zelenskyy or Nazism in Ukraine. Israeli foreign minister Yair Lapid denounced the comments as an “unforgivable and scandalous and a horrible historical error,” adding that “the Jews did not murder themselves in the Holocaust. The lowest level of racism against Jews is to blame Jews themselves for antisemitism.” The Russian ambassador was summoned in protest; Israeli newspapers and major Jewish organizations issued full-throated denouncements of Russia.

The stakes are readily apparent. Israel has pursued a kind of measured neutrality since the Russian invasion of Ukraine commenced on February 24, largely refusing to join the Western sanctions regime arrayed against Russia. Prime Minister Naftali Bennet has sought to position himself as a key wartime mediator, going as far as to fly to Moscow in the conflict’s opening stages to meet with Russian president Vladimir Putin for three hours. But Lavrov’s comments reinvigorated the Russia hawks in Israel, making it more difficult for Bennett to continue staking out a neutral position as the war drags on into its third month. “Lavrov's antisemitism means Israel no longer neutral on Ukraine-Russia,” read a headline from the Jerusalem Post. Yet, the Kremlin’s first instinct was to double down on Lavrov’s manifestly counterproductive statements. “We noticed the anti-historical comments made by Israeli foreign minister Yair Lapid, which go far in explaining the current Israeli government’s support for the neo-nazi regime in Kiev,” opened a lengthy statement published on Tuesday by the Russian foreign ministry. The statement read as a kind of lecture on Ukrainian antisemitism, drawing on a well-rehearsed repertoire of Russian talking points regarding a purported uptick in Ukrainian hate crimes against ethnic minorities, Zelenskyy’s alleged complicity in stoking neo-Nazi sentiment, and the legacy of the early twentieth-century Ukrainian nationalist activist Stepan Bandera. “Everyday and political anti-Semitism and Nazism are not suppressed [in Ukraine], on the contrary, they are nurtured,” the foreign ministry concluded. The statement was accompanied by allegations, leveled by foreign ministry spokeswoman Maria Zakharova, that Israeli mercenaries were fighting “practically shoulder to shoulder” with the ultranationalist Azov Battalion in Ukraine.

The Russian foreign ministry’s pushback against Israel is a reflection of the Kremlin’s uncompromising approach to questions of historical memory. The Red Army’s victory over Nazism in World War II has become a core pillar of Russia’s national identity in the years following the annexation of Crimea in 2014. The war in Ukraine is being cast by Russian political commentators and politicians as a redux of the Eastern Front in World War II; now, as in 1941, Moscow sees itself as waging a righteous crusade to rid the world of a genocidal Nazi government.

But Israel is no less strident on matters it sees as vital to its own national identity, of which the Holocaust has long been a central part. Pragmatism triumphed in the end, with Moscow opting to relent rather than escalating the spat further. Putin phoned his Israeli counterpart on Thursday to offer what Bennet’s office described as an apology. “The Prime Minister accepted President Putin’s apology for Lavrov’s remarks and thanked him for clarifying the President’s attitude towards the Jewish people and the memory of the Holocaust,” read a statement issued by Bennett. The Russian readout of the call made no mention of an apology, but neither did the Kremlin dispute Israel’s claim that Putin expressed regret over Lavrov’s comments.

The two statements signaled what appears to be a convergence in Russian and Israeli historical memories regarding the major events of World War II, with the Israeli prime minister reportedly noting the "decisive contribution of the Red Army to the Victory over Nazism." The Kremlin’s readout further stressed the importance of shared Russian-Israeli symbols: "In the run-up to the Victory Day … which is celebrated both in Russia and Israel on May 9, Vladimir Putin and Naftali Bennett stressed a particular significance of this date for people of both countries, who cherish the historic truth of these years’ events and commemorate the memory of all of the fallen, including Holocaust victims."

The Russia-Israel anti-Semitism spat has ended as abruptly as it began. The reasons behind Moscow’s sudden change of heart, culminating in Putin’s call to Bennett, remain unclear. The Kremlin may very well have concluded that it cannot afford to alienate a neutral state that can potentially play a key role in future peace talks between Russia and Ukraine over minute differences of historical interpretation.

Russia commemorated the Soviet victory over Nazi Germany today, on May 9. The celebration has surged in popularity since 2014 to become the country’s most important holiday according to recent polling.