Why Russia Is Claiming Victory In Syria 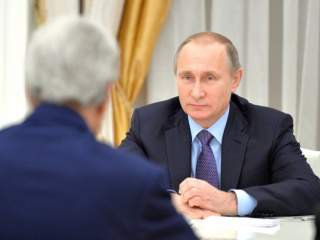 The Russian president recently caused an international furor when he abruptly announced that his government was commencing a military withdrawal from Syria. Russia had “radically changed the situation” on the ground through its involvement, and its strategic objectives had been “generally accomplished,” Putin said in a televised meeting with top advisors in Moscow, including Defense Minister Sergei Shoigu and Foreign Minister Sergei Lavrov. As a result, Russia’s commander-in-chief declared, he had made the decision “to start withdrawal of the main part of our military group from the territory of the Syrian Arab Republic starting from tomorrow.”

The March 14 announcement was both abrupt and surprising, coming as it did just six months after Russia’s entry into the Syrian civil war amid grandiose promises of an enduring global coalition against Islamic radicalism. Not surprisingly, observers have tended to view Moscow’s move as a preemptive step designed to avoid quagmire in Syria’s grinding half-decade-old conflict.

Perhaps it is. But Putin’s decision also reflects a savvy long-term calculus on the part of the Kremlin.

From the start, Russia’s decision to intervene was driven by several overlapping objectives. Rhetorically, Putin’s government styled its actions as the start of an expansive crusade against the Islamic State terrorist group—and as a necessary byproduct of Western fecklessness. But its real motives were a good deal more pragmatic.

First and foremost, the Kremlin was eager to strengthen the regime of longtime ally Bashar al-Assad, which was then losing significant ground to its various political opponents. Simultaneously, it was also keen to reinforce its strategic position in the eastern Mediterranean, which was centered on the longstanding Russian naval base in the Syrian port city of Tartus. Meanwhile, Putin’s government was desperate to regain momentum that had been lost in preceding months in Ukraine, where its forces had encountered stronger-than-expected resistance.

Six months on, all of those objectives have been achieved.

Thanks largely to Russian assistance, Assad’s government has continued to cling to power. While Syrian regime forces have not managed to retake substantial territory, they have succeeded in consolidating control over what has come to be known as “Alawistan”—an ethnic enclave in the west of the country where the current regime can survive (albeit in diminished form). As a result, Assad’s days now don’t appear quite so numbered.

Moscow’s military presence in Syria, meanwhile, has expanded dramatically. Since September, Russia has significantly reinforced its preexisting naval base at Tartus, erected a new airbase in Latakia, and commenced work on at least two other military facilities nearby. It has surged manpower and materiel into the area, and placed naval cruisers from its Black Sea Fleet on “permanent” rotation off the coast of Syria.

Russia’s Syria deployment has also paid clear political dividends. Through it, Putin has been able to divert domestic Russian opinion away from the massive failures of his government (fiscal decline, a dwindling supply of foreign goods, and deepening authoritarianism among them). The intervention has also allowed Russia to at least partially break out of the international isolation caused by its earlier aggression against Ukraine. And while this has not led to a slackening of Western sanctions, it nonetheless has positioned Moscow as a key power broker in the Middle East.

Russia, after all, was an intrinsic part of the putative ceasefire concluded in Geneva in mid-February, and—as a result of its ongoing leverage over Assad—remains essential to its implementation. That, in turn, gives the Kremlin a deciding voice over regional politics, because the West will require Russia’s assistance to ensure the Assad regime’s continued compliance with the terms of any political solution.

Nor has Russia abdicated the strategic advantage on the ground. The Kremlin has been coy about the size and strength of the military contingent that will remain in Syria after the “main part” of its forces have withdrawn. Yet all indications are that remainder is sizeable—and capable. Indeed, Russia is continuing to carry out airstrikes on anti-regime targets even as its forces begin to pull out of the country. And if necessary, Moscow can still turn back the clock. As Putin himself has noted, Russia could surge military forces back into Syria if it deemed necessary – and could do so in a matter of mere hours.

Given the continuing chaos in Syria, it’s tempting to view Russia’s unfolding drawdown as strictly a defensive maneuver. But Putin’s directive bears all the hallmarks of a more complex and nuanced strategy – a reversible step designed to garner his government important political leverage while preserving the strategic advantages it has managed to secure so far.

Seen in this light, Putin’s mission has indeed been accomplished.