Why Russia May Win in Libya 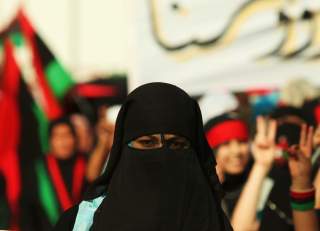 What snapshot best captures the insanity of America’s approach to the Middle East? The most obvious answer is the war in Iraq—a country in which we’re still bogged down almost fourteen years after overthrowing Saddam Hussein. Another is the Syrian Civil War, where many factions are running around with American-supplied weapons—including the former Al Qaeda franchise and Hezbollah.

But for my money, our Mideast folly is best illustrated by the region’s next-door neighbor, Libya. In that country, a civil war is deepening between an American-backed government and a previously American-backed general. The former is the United Nations–endorsed Government of National Accord (GNA), which was sealifted over from Tunisia last spring. The interim government has since failed to exert control over even the capital city of Tripoli. The latter is Khalifa Haftar, a prior ally of Muammar el-Qaddafi, who later defected and engineered several failed attempts at toppling the regime while living in Virginia. The GNA is dismissed by many in Libya as a Western puppet, while Haftar is rumored to be a CIA agent. Additionally, innuendos widely persist that the United States created ISIS—a shared enemy of GNA and Haftar.

So our battle for hearts and minds continues apace.

Haftar and the government he backs, known as the House of Representatives (HOR), are based in the eastern Libyan city of Tobruk. The city’s persistence against Axis attacks during World War II rattled confidence in famed German officer Erwin Rommel. Today, it’s the West that Tobruk is vexing. The HOR’s refusal to endorse the GNA and the continuing quarrels between the two governments are thwarting diplomatic attempts at unification. The two sides briefly set aside their differences to expel ISIS from the city of Sirte late last year, but even then there was jostling. Since then, tensions have escalated once again. Both governments derive their military power from factionalized fighters, particularly the GNA, which is reliant on powerful militias from the city of Misrata. Libya became fractured after el-Qaddafi was deposed. It is now a game of militias and it is those militias that will ultimately decide its political fate.

Prior to 1963, Libya was split into three provinces: Tripolitania (home of the modern-day GNA), Cyrenaica (home of the modern-day HOR) and Fezzan. At that point, the country was feebly governed by King Idris of Libya. Tribal and provincial identities ran strong and often superseded any national allegiance. Hoping to forge a more singular Libya, the king eventually abolished the provinces. After Idris was overthrown in 1969, el-Qaddafi followed with a ruthless program of nationalization, which produced the country that we know today. It’s a cruel admission, but el-Qaddafi created modern Libya, and without his adhesive regime it has predictably disintegrated. Thus, the United States made the same blunder in Libya that it made in Iraq. It failed to comprehend that the object was an artificial nation and did not bother to study the myriad divisions that crisscrossed beneath the surface. By trying to supplant a dictatorship with a national democracy, the United States only created chaos.

The best that can be said about Libya today is that its civil war is not as bloody as the one in Syria. Still, an ominous similarity between the two conflicts is taking shape. Russia, which has long reinforced Bashar al-Assad’s regime in Damascus, has gotten involved in Libya by backing the HOR. Recently, Haftar was feted aboard the Admiral Kuznetsov, Moscow’s lone aircraft carrier. It was there that he inked an agreement with the Russians. Vladimir Putin is hoping to score public-relations victories both ideologically and militarily: first, by supporting strongman Haftar while the Western-linked and putatively democratic GNA flounders, and second, by continuing to appear a scourge of terrorism (Haftar despises Islamism and has been instrumental in fumigating Benghazi of jihadists). Libya will further Russia’s goal of bolstering its presence in the Mediterranean. The agreement Russia signed with Haftar permits the country to build two new bases in eastern Libya.

It’s not just Putin who’s sidling up to Tobruk. Haftar is also backed by Saudi Arabia, the United Arab Emirates and Egypt, which views him as more committed to combatting cross-border terrorism than Tripoli. Many in Tobruk are also anticipating a boost from Donald Trump, whose preference for strongman-enforced order over democratic disorder dovetails nicely with Haftar’s aims.

As for America’s patron, the GNA, it was shaken earlier this month when deputy leader Musa al-Koni resigned. He said at a press conference in Tripoli that he chose to resign because the GNA’s Presidential Council held “responsibility for the killing, kidnapping, and rape that happened over the past year” and remained “incapable.” Additionally, the GNA has been fending off attacks from a third government, the National Salvation group in Tripoli, which ceded power in 2016 but has begun fielding gunmen again.

Haftar has been closely watching all of these things. He already announced earlier this year that he has no plans for future negotiations with the GNA. If he believes he can consolidate control over the country by linking up with loyal Zintan Brigades southwest of Tripoli and maybe even moving on the tumultuous capital itself, then he might just try—even if the powerful Misratans never submit to him. Perhaps the ultimate achievement of the West’s Libyan intervention is to swap one Russian-allied strongman for another. That’s one damning outcome, but surely we’re accustomed to those by now.