Why Russia Might Not Want a Deal with Trump 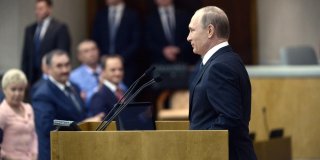 Presidents Donald Trump and Vladimir Putin had their first formal encounter on Saturday in an extended telephone conversation that enabled the two chief executives to exchange views on the future course of the bilateral relationship between the United States and Russia. Despite the alarmist warnings that the new U.S. president was prepared to make wholesale unilateral concessions to the Kremlin, the call resulted in nothing of the sort, as Trump has indicated that his administration would carefully review U.S. policies towards Russia.

Based on the readouts of the call provided both by the Russian presidential administration and the White House, the two men had a frank, pleasant conversation. No binding agreements were made, and the point of the call seems to have been to establish a preliminary foundation that, over the coming months, both sides might be able to build upon. Yet this beginning does not automatically portend an easy road going forward.

One of the most useful frameworks for understanding foreign-policy decisionmaking is the so-called “two-level game,” as most famously conceptualized by Harvard professor Robert Putnam. In a nutshell, Putnam argued that while two leaders negotiate with each other, they must simultaneously bargain within the confines of their domestic political systems—and that their freedom of maneuver on the international stage can be constrained by the actions of important actors at home. No matter how warm and friendly the Putin-Trump relationship might become, it will be of limited value if Trump is unable to convince the U.S. national-security community that his approach can work, or if Putin is prepared to alter Russia’s foreign-policy course to better align with U.S. preferences.

Over the last several weeks, whenever the question of how U.S.-Russia relations might improve under a Trump administration has been brought up, there has been a great deal of commentary on the considerable bureaucratic resistance the new team might face in any new outreach to Moscow, plus an overwhelming bipartisan consensus in Congress that views Russia as a threat and Putin as an untrustworthy adversary (to put it in polite language), and the lack of any major interest groups lobbying for improved relations. Prior to Trump’s Saturday call, senior Republican leaders again warned the president to take no immediate action to lift or modify current U.S. sanctions on Russia, and indicated that legislation may be in the works to limit Trump’s freedom of action when it comes to Russia.

There has not been much discussion, however, about possible objections within the Russian system to a rapprochement. The base assumptions are that the Russian side is desperate for improved ties with Washington, and that Putin enjoys nearly unlimited freedom of action when it comes to setting Russian policy. Yet there are plenty of ways in which forces in Russia that may not wish to go down the path of a Reset 2.0 might throw monkey wrenches into the process.

Consider the comments made last week by Deputy Duma Speaker Pyotr Tolstoy with regards to protesters who oppose the return of St. Isaac’s Cathedral in St. Petersburg (incidentally, the church in which my great-grandmother and great-grandfather first met) from the St. Petersburg government to the Russian Orthodox Church. Currently, while the church can hold services there, the title to the structure—and the revenues generated when the cathedral functions as a museum—continue to flow to the local government. Tolstoy characterized the protestors as the descendants of those “who destroyed our cathedrals after jumping over from the Pale of Settlement with revolvers in 1917.” The clear implication is that the 1917 Bolshevik revolution was a Jewish conspiracy designed to target ethnic Russians and their institutions—and that the protestors were both their ideological and ethnic descendants.

Duma Speaker Vyacheslav Volodin attempted to paper over the damage Tolstoy’s comments had caused both inside Russia and internationally by commenting that Tolstoy could simply have been referring to convicts residing in the Pale rather than singling out those of Jewish faith and ethnicity. However, the specific reference to the Pale—the line drawn to restrict the Jewish populations inherited by the Russian Empire from the partitions of the Polish-Lithuanian Commonwealth from moving to the heartlands of the Russian state—could have applied to no other ethnic, religious or social group.

Tolstoy’s statement feeds directly into a potent anti-Semitic narrative that poses not only dangers for maintaining Russia’s interethnic and interreligious balances, but threatens to upset Russia’s growing strategic partnership with Israel. More importantly, it creates additional problems for any U.S. administration seeking to improve ties with Russia by eroding valuable political capital that the new president will have to spend to gain the flexibility he needs to consider new approaches to the relationship. While continued news coverage in the United States has concentrated on the domestic political actions of the new administration, meaning that Tolstoy’s comments have not received much attention, many Americans of Jewish heritage whose ancestors left that very same Pale of Settlement within the Russian Empire to escape persecution and discrimination, and who are aware of his statements, will find it that much easier to side with those who argue that it is not worth engaging the current Russian government.

Tolstoy’s comments are a warning that Russian politicians have a number of tools at their disposal to sabotage any efforts at a Trump-Putin détente. There are others as well.

While Putin has more power than a U.S. chief executive to set the Russian foreign-policy agenda, there are nonetheless powerful “vectors” in Russian foreign policy that might mitigate against any rapid shift in relations. The Trump administration has hinted that it is interested in forging a better relationship with Russia in order to get Moscow’s help in offsetting China and isolating Iran. It is true that Russia has had historic frictions with both Tehran and Beijing—including a series of hot wars over the centuries. There still exists considerable mistrust in the Russia-Iran and Russia-China relationships. Yet powerful and influential actors in Russia will oppose sacrificing the beneficial partnerships that have sprung up in recent years in order to cultivate an uncertain degree of American goodwill. The Russian defense complex and energy industries have important and vital interests (including important and ongoing sales of equipment), producing income streams that cannot be easily substituted by improved relations with Washington. While U.S. sanctions have been problematic, Russia has also learned to live with them, and is not necessarily prepared to make major concessions on Syria or Ukraine in advance of vague promises of sanctions relief from the United States. A limited economic recovery—and the success of the state in privatizing a portion of the Rosneft state oil company despite Western sanctions—has strengthened the hand of those arguing against making any premature concessions or capitulations to the Americans.

In turn, it will be harder for the Trump administration to push for changes in the relationship if it cannot convince the many skeptics in the U.S. government and foreign-policy community that engagement with Moscow is more likely to produce successes for stated U.S. goals and interests than continued or even accelerated confrontation.

It is good that the first official conversation between Putin and Trump went so well. But prospects for any sort of grand bargain in the coming months look dim unless one, or both, are willing to fight strongly against the current in both nations working against better relations.