The Battle For The Arctic 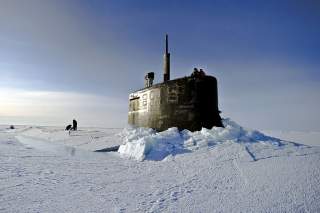 Anyone who’s paid any attention to media coverage of the Arctic, even just in passing, knows that there’s a battle brewing for the top of the world. Climate change is melting the region’s protective shield of ice and opening its vast lands, seas, and associated bountiful natural resources to human activity. But Arctic states don’t agree on how these prizes should be divided, with many proffering overlapping claims to the far north. As such, the dominant Arctic narrative presents the region as one to be scrambled to and claimed, and even fought for. Headlines touting a “Race for the Arctic” and a “New Cold War”—and yes, even a “Battle for the Arctic”—pervade Arctic discourse and are often how the public and policymakers are exposed to the region.

In this narrative, Russia and its robust Arctic presence are regularly trotted out to dramatize the situation and present as an ominous reason for other countries to more proactively turn their attention and investments northward. The frequent comparisons between Russia and the United States are good examples of this practice: Russia has over 40 icebreakers while the United States has only two; Russia is massively upgrading its Arctic military capabilities while the United States remains relatively stagnant; etc. If the United States doesn’t shift into high gear Arctic-wise, the implication is that Russia will follow its horde of icebreakers to conquest and riches while America simply looks on.

All of this fear-mongering and beating of the drums of war is, however, misguided. In 2008, the five states with Arctic coastlines, and that have overlapping territorial and jurisdictional claims to the region, publicly reaffirmed their commitment to settling their disputes peacefully according to international law through a document called the Ilulissat Declaration (In so doing, then-Danish Foreign Minister Per Stig Moller hoped that the countries had, “once and for all, killed all the myths of a ‘race to the North Pole.’” Time would tell that they hadn’t). It was a reaffirmation because Russia actually made the first submission under this body of law in 2001, which is additionally important for two reasons. First, it shows that Arctic states have been actively dedicated to the peaceful resolution of their differences for 15 years. Second, it shows the substantial commitment of the Arctic’s most unpredictable actor to this peaceful, rules-based process. Even in the face of Russia’s belligerent incursions into Ukraine, Arctic cooperation has remained steady.

Further examples of Arctic collaboration abound. Arctic states regularly conduct joint surveying missions to map their continental shelves (the very things that commentators say they will come to blows over), and Russia and Norway came to terms on the border between their continental shelves in the Barents region in 2010, where both countries have significant interests. In addition, this past year, the respective Coast Guards of the eight states with Arctic territory (Canada, Denmark, Finland, Iceland, Norway, Russia, Sweden, and the United States) signed a cooperative agreement on information sharing and joint operations. And finally, and perhaps most importantly, these same eight states established the Arctic Council in 1996 as a forum through which to jointly tackle environmental protection and sustainable development in the region, and, more broadly, to “promot[e] cooperation, coordination and interaction among the Arctic States.” Through this association, they have collectively produced massive amounts of research and a number of binding treaties governing Arctic activities.

Despite this prevalent cooperation, however, there is still a battle for the Arctic taking place, it just doesn’t involve militaries. Rather, the struggle is over how the region and regional international relations are presented by the media and discussed by policymakers. For roughly a decade, the Arctic as a theater of conflict has dominated popular discourse. But experts on the region are increasingly speaking up to counter ill-informed descriptions and give the public and officials better accounts of the far north.

How the Arctic is conceptualized has important implications for how states approach the region. Although the Arctic remains a space of peace and exceptional cooperation, if discussion of the region continues to be dominated by doomsaying, these views may work themselves into northern policy and international relations. Thus, they may be self-fulfilling.

This danger is made apparent by statements like that from then-Prime Minister of Canada Stephen Harper, made in reference to new Arctic-directed military initiatives: “Canada has a choice when it comes to defending our sovereignty over the Arctic: Either we use it or we lose it.” More recently, U.S. Representative Duncan Hunter also brought the popular discourse on a hostile Arctic into the policy arena: “The Cold War might be over, but the U.S. and Russia are once again in direct competition in the race to gain access to the Arctic and project force from the polar region.”

In light of the discussion above, the problems with these statements are glaring. As it stands, the notion that another country will come and take Canada’s Arctic territory if it doesn’t significantly bolster its northern military presence is quite extreme. With regard to Rep. Hunter, there is no Arctic race and the United States and Russia have yet to directly compete over anything in the far north. Nevertheless, insert nationalism and perceived enemies into a conversation and the risk of a dangerous snowballing of geopolitical competition and conflict rises.

It must be made clear that the Arctic has been, is, and will likely continue to be a region of remarkable cooperation where the fundamental interests of Arctic states—in stability and the rule of law—align. If not, the menace of the battle over the conceptualization of the Arctic turning into a physical battle will grow, and the region and the world will be needlessly threatened.

Andreas Kuersten is a law clerk for the U.S. Court of Appeals for the Armed Forces (CAAF), the country’s highest military court. Andreas previously worked for the National Oceanic and Atmospheric Administration on Arctic projects and was a fellow with the Arctic Summer College. His work has appeared in numerous publications, including Foreign Affairs, Forbes, the Montréal Review and the Seattle Times. The views expressed are his own.

Image: U.S. Navy sailors and members of the Applied Physics Laboratory Ice Station clear ice from the hatch of the USS Connecticut as it surfaces above the ice in the Arctic Ocean. Wikimedia Commons/Public domain