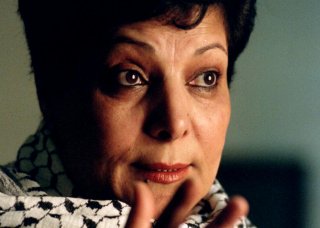 Fifty years ago, a quick-thinking El Al pilot refused the demands of two hijackers to open his cockpit and, instead, sent his plane into a sudden nosedive to knock the hijackers off their feet. After he leveled out the plane, a sky marshal on board fatally shot the male hijacker and arrested the female, who had tried to blow up the plane with a grenade that, fortunately, did not explode.

That female, Leila Khaled, was no stranger to hijackings by then. A prominent member of the Popular Front for the Liberation of Palestine (PFLP)—a terrorist group that seeks Israel’s destruction—she was one of two PFLP members who, in 1969, hijacked a plane that had left Rome for Tel Aviv, directing it to Amman, Jordan. The group then blew up the plane but spared the passengers.

Her attempted El Al hijacking came a year later, in September of 1970. Shortly after her arrest for it, she was released in exchange for hostages from other PFLP hijackings of that same day. Now seventy-six, Khaled lives in Amman and sits on the Palestine National Council, a parliamentary body that oversees the Palestine Liberation Organization. She remains unrepentant, insisting she is “a victim of oppression and occupation” and Palestinians have the right to “resist by any means.”

So, why did San Francisco State University give Khaled a platform last week to speak on a webinar entitled, “Whose Narratives? Gender, Justice & Resistance: A Conversation with Leila Khaled.”

As it turned out, Zoom decided a day before the event to prohibit the university from using its platform for it, saying that would violate Zoom’s “terms of service” due to Khaled’s affiliation with a U.S.-designated terrorist group. YouTube then ended its livestream after twenty-three minutes, claiming the content was violating its own “terms of service” and leaving at least nine hundred viewers in the dark.

Nevertheless, the invitation to Khaled reflects the moral confusion on issues of global concern that afflicts all-too-many institutions of higher learning these days. For while the university justified the event on free speech grounds, it applies that lofty notion of free speech with striking selectivity.

“A university is a marketplace of ideas,” a spokesman said in response to calls from Jewish groups and individual Israelis to cancel the event, “and San Francisco State University supports the rights of all individuals to express their viewpoints and other speech protected by law, even when those viewpoints may be controversial.”

That’s a bit rich, for two reasons. First, the question isn’t whether Khaled has the right to speak. The question instead is whether an institution of higher learning, which presumably has an important role to play in nurturing a civilized society, wants to legitimize a would-be murder by giving her a platform.

Second, San Francisco State University is no poster child for free speech when it comes to Jews and Israel. In fact, it has “earned a reputation as the most anti-Semitic college campus in the country,” according to The Lawfare Project, a global network of legal scholars that seeks to defend Jews and the “pro-Israel community.”

In March of 2019, the university reached a landmark settlement in a lawsuit by Jewish students who alleged discrimination. Nevertheless, that September, the university refused to distance itself from a Facebook page in which its Arab and Muslim Ethnicities and Diasporas Studies program denounced the university’s president for welcoming “Zionists” to campus and reposted a banner that read: Zionist = Racism.

The university’s refusal to reconsider whether to give Khaled a platform is striking for other reasons as well.

For one thing, on campuses all over America in recent years, scores of speakers have been disinvited or pressured to cancel due to opposition by outraged groups of all different stripes—including former Secretary of State Condoleezza Rice, former Secretary of Homeland Security Jeh Johnson, Somalia refugee and women’s rights crusader Ayaan Hirsi Ali, and conservative writer Ben Shapiro.

Apparently, if a person carries out the foreign policy of George W. Bush or the homeland security policy of Barack Obama, or if they decry the oppression of women in Islamic societies, or if they are a writer of strong conservative views, then they are free game for cancellation. If, however, they are a proud, Israel-hating terrorist, then they can find a campus to air their views on the basis of free speech.

For another thing, more Arab nations are accepting Israel and seeking peace with it, and they are abandoning their cynical exploitation of the Palestinian cause. The peace that is spreading across the region holds great potential to help the struggling people of those Arab nations that are brave enough to seize it.

That reality, however, continues to escape the notice of a campus intelligentsia that refuses to abandon the decades-long narrative of Israel as the world’s greatest oppressor, and that still considers Israel the rightful subject of whatever murderous campaigns the terrorists of Gaza or the West Bank have in store.