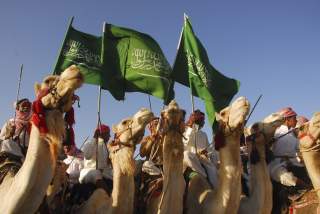 In recent weeks, Saudi Arabia has become more assertive. It first imposed a total blockade on Yemen, despite claims that this would lead to widespread famine. (It most recently announced that it would allow some humanitarian aid supplies). It unseated the prime minister of Lebanon, presumably because he did not stand up to Hezbollah. And it charged Iran with an act of war because a missile the Houthi rebels in Yemen fired at Riyadh was supplied by Iran. In reporting about these developments, the media is repeating a very widely held image—and one that is dead wrong. The media seems to imply that there are two camps in the Middle East vying for control of the region: the Shia camp led by Iran and the Sunni one led by Saudi Arabia. Although it is rarely explicitly stated, the implication is that there are more or less two equal camps, each able to at least contain the other and maybe even succeed in dominating the region. Nothing could be further from the truth. Actually, the Sunni camp is much weaker and in slow retreat, despite its recent assertiveness, and the Shia camp is considerably stronger and continues making significant gains, albeit gradual ones.

When one compares Iran to Saudi Arabia, one finds that Iran has a strong military force of approximately 550,000 active personnel, boasts the largest arsenal of short- and medium-range ballistic and cruise missiles in the region, and is close to being able to make its own nuclear weapons. Further, its aviation engineers are developing sophisticated attack helicopters and are among the world’s best in drone technology. The Iranian Revolutionary Guard Corps are dedicated fighters with considerable battlefield experience.

Saudi Arabia has a much smaller army (albeit, an impressive Air Force), but it is very reluctant to fight, and is said to be mainly suited for performance on parade grounds. The Saudi forces and the larger Gulf Cooperation Council joint forces are “like most Arab militaries, built to protect authoritarian regimes from unarmed civilian uprisings, not to fight actual wars,” reports Bobby Ghosh in Quartz. “Beating up pro-democracy activists is one thing: Taking on a battle-hardened, Iran-backed militia is quite another.” (Saudi Special Forces get a much higher mark.) In the past Saudis did their fighting by outsourcing it to Egyptian and Pakistani troops. No such troops are currently available for fighting in Yemen though some Pakistani troops have been deployed to Saudi’s southern border. Hence, Saudi Arabia has limited itself mainly to airstrikes in Yemen, and so far has been unable to squash a molten crew of tribal forces, that of the Houthis.

While Iran is surprisingly politically stable, Saudi Arabia is embarking on a multifaceted attempt to reengineer Saudi society, culture, economy and polity. In the process, it is antagonizing the traditional, conservative elites and their supporters among the devout Muslims; the thousand-plus princes and their cohorts who are used to living high on the hog of the land; and those who are used to—and benefit from—a fairly high level of corruption. The leaders of this transformative movement are betting much of the Saudi wealth on being able to grow new industries and, in effect, a new economy—one not based on the extraction of oil. You heard it here first: this sweeping transformation is going to fail and Saudi Arabia will end up on the list of failing states in the Middle East.

The other power player in the Shia-Sunni contest is Hezbollah, the most well-organized and battle-tried non-state fighting force in the world. Its active ranks number roughly twenty thousand, armed with a great deal of military technology it gained from Iran and from the black market, including tanks, drones and more than 150,000 missiles. It largely gets its funds and marching orders from Iran. Despite repeated reports of two (or more) vying camps in Lebanon, in effect Hezbollah is dominant. Recent Saudi gestures that seek to change this reality will prove to be futile, given its limited leverage in Lebanon. Reports that the Saudis are planning to go to war with Hezbollah are from people who seem unable to read a map and ignore Saudi Arabia’s distaste for fighting. Nor should one expect that Israel, despite its increased alliance with Saudi Arabia, will do its bidding. There is no there there.

In Syria, Assad’s regime, which Saudi Arabia has been most keen to unseat, is winning—with the help of Iran, Russia, and to some extent, Turkey. In Iraq, the Iranian-led militia constitutes a major force and the Iraqi government is ever more under Tehran’s influence. When Iranians boast that they are increasing influence in Baghdad, Damascus and Beirut, they are not overstating their case. Saudi Arabia has no such gains to its name. In fact, it is even losing influence in Egypt, a nation usually listed in the Sunni camp. (Egyptian president Sisi just called for caution in approaching tensions in the Gulf and said he is “against war.”) Jordan, another nation listed as a member of the Sunni camp, has historically kept a low profile, avoiding conflict. It is too busy dealing with millions of Syrian refugees and keeping tabs on the majority of its citizens who are Palestinians. The Emirates have deep pockets but not much else to offer, and they differ among themselves on which course to follow.

The fact that the Shia are gradually ascending and the Sunni camp does not have the willpower and wherewithal to stop them—and that Russia is supporting the Shia camp—leads to the inevitable conclusion that if the United States does not greatly increase its commitments to the region, then the Sunni camp will continue to fail. The United States could choose to engage to increase its role in several proxy wars in the region, but it makes much more sense for the country to directly confront Iran.

Amitai Etzioni is a University Professor and Professor of International Affairs at The George Washington University. He is the author of Avoiding War with China and Foreign Policy: Thinking Outside the Box. For more discussion on this topic, see his 2011 article “Shifting Sands.”

Image: Saudis riding camels wave the country's national flag during celebrations of the 7th anniversary of Saudi King Abdullah's accession to the throne, in Ashwaq city near Tabouk, 1500 km (932 miles) from Riyadh May 21, 2012. Picture taken May 21, 2012. REUTERS/Mohamed Alhwaity​