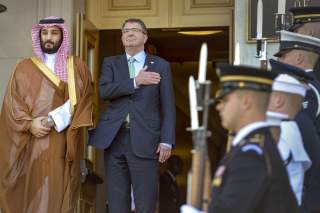 If Saudi military capabilities are weakened, the chances that another state actor can rally the region behind a viable stabilization plan are next to none. Riyadh is the only major Arab world power that is stable and prosperous. And the fact that the Arab and Islamic World are rallying behind Riyadh’s leadership is not only motivated by Saudi Arabia’s reliability and stability, but also by its diplomatic, economic and military power, as well as its symbolic power as the birthplace of Arab and Islamic civilization. The Arab nation was born in Souk Okaz, grew up in Dar Annadwah, and emerged from the Suspended Poems. The Islamic nation was born in Mecca, grew up in Medina, and emerged from Saqifat Bani Sa’idah. From the Rashideen era, Umayyad era and Abbasid era, to Arab royal families and until today, political and religious elites of the Arab and Islamic worlds trace back their origins to this land. And it is towards this land that more than one billion believers around the world turn their faces five times a day.

Blocking arms sales to Saudi Arabia will put the territorial integrity of the Arab world, its security, and the stability of the region in jeopardy. The current balance maintained by Riyadh and its allies will be in a grave danger, and with it American security and interests.

Mansour Almarzoqi is a researcher on Saudi politics in Sciences Po de Lyon.