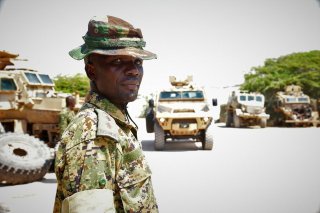 When the Biden administration released its National Security Strategy (NSS) and accompanying National Defense Strategy (NDS) in October, the U.S. foreign policy community’s response largely focused on debating the two documents’ approach to competition with Russia and China. With the eyes of Washington transfixed by the fine points of great power politics, few noted that the NSS and NDS disappointingly doubled down on the dangerous and counterproductive strategy of providing billions of dollars in counterterrorism-focused security sector assistance (SSA) to militaries in fragile states, largely in the Middle East and Africa.

The pitfalls of providing equipment, training, technical assistance, and logistical support to countries without properly functioning military institutions have become painfully clear in recent years. Efforts to create capable security forces in Iraq and Afghanistan ended in disastrous failure. U.S.-trained forces in Africa have failed to halt the spread of terrorist violence but have shown themselves to be quite proficient at conducting coups, killing dissidents, and radicalizing disillusioned youth. Yet the Biden administration and the broader U.S. national security establishment appear to have made no serious attempts to rethink SSA strategy in light of these failures.

Instead, the NSS’ terrorism section calls for the United States to “increase cooperation” with unnamed “trusted partners.” Likewise, the NDS states that the Department of Defense (DoD) will “leverage security cooperation and capacity building with partners” to address “other major threats” besides Russia and China (i.e., terrorism). Adding some specificity, the NDS emphasizes that in Africa, the DoD will continue efforts to “build states’ capability to degrade terrorist organizations.” This likely means that the practice of providing military aid to unstable governments in the name of counterterrorism is set to continue largely unabated.

The logic of this flawed strategic approach to SSA is rooted in understandable concerns. In the wake of the September 11 attacks, Washington’s attention turned to the apparent dilemma posed by terror groups operating from the world’s poorly governed spaces. By 2010, Defense Secretary Robert Gates named failing states “the main security challenge of our time.” In response, U.S. policymakers have increasingly attempted to wield SSA as a remedy for weak governance and poor security institutions in nations that are not traditional U.S. allies but are nonetheless considered pivotal theaters in the War on Terror.

Unfortunately, the decades-long effort to build the capacity of local security forces in fragile states has produced a litany of failures. SSA recipients may lack the technical capabilities or financial resources necessary to maintain U.S.-provided military equipment. Moreover, sudden infusions of cash and valuable equipment into low-income societies create immense incentives for elite capture and corruption, decreasing military effectiveness. Before their collapse, the U.S.-backed Afghan security forces were notorious for the prevalence of “ghost divisions” invented by corrupt officers to pocket funds meant to pay soldiers. Hundreds of thousands of small arms provided to the Afghan and Iraqi militaries went missing, with many likely stolen and sold on the very black markets that channel weaponry to insurgent groups.

Moreover, SSA can perversely undermine democratic governance by enabling recipient militaries to repress political enemies. Research has found that increasing military aid to fragile, post-conflict states is causally linked to a higher likelihood of human rights abuses. SSA can also shift power to security forces at the expense of elected civilian authorities. Since 2008, U.S.-trained officers have successfully executed eight coups: three in Mali, three in Burkina Faso, and one each in Guinea, Mauritania, and the Gambia.

The recent failings of SSA programs have begun to spur a few nascent reform efforts. Many national security officials have coalesced around the concept of “institutional capacity building” (ICB), defined by DoD as support for “partner nation efforts to improve security sector governance and core management competencies.” Although well-intentioned, ICB is unlikely to be the potent solution that its proponents claim. The entire enterprise of SSA in fragile states, including newfound efforts to emphasize ICB, rests on the premise that it is possible to turn weak institutions into strong institutions through the concerted application of U.S. assistance. Unfortunately, there are many reasons to doubt this assumption.

Most fragile states are postcolonial societies where indigenous state capacity was long ago destroyed by imperial powers who left behind low-quality extractive institutions and failed to transmit norms of democratic governance. The corrosive institutional effects of a century (or more) of colonial maladministration are not easily reversed. In such societies, the state is not trusted to be impartial and governance is often characterized by “clientelism” or “neopatrimonialism,” in which the governing institutions are co-opted by self-interested parties to distribute material benefits in exchange for political support. In Weberian terms, the “rational-bureaucratic” institutional structures understood and recommended by U.S. defense advisors simply do not exist and cannot be created by any training course or technical assistance program.

Given the evidence of both theory and history, it would be wise for the United States to abandon building the capacity of fragile states’ military forces as a major strategic focus of its engagement abroad. It remains unlikely that SSA, even when combined with a focus on “institutional capacity building,” will succeed in creating effective, law-abiding militaries in societies where strong state institutions are unlikely to develop in the near term. In the rare cases when a terror group turns from a regional nuisance into a true threat to the U.S. homeland, direct military action from “over the horizon” likely remains the best option.

Ultimately, military institutions in fragile states are weak for the same reasons all institutions in fragile states are weak. U.S. assistance to the security sector alone—even when it is attentive to local political and cultural dynamics—does nothing to solve the challenge of state fragility writ large. Where institutions are weak and governance is poor, the United States should avoid the temptation to conjure up capable military forces where, for the time being, they likely cannot be created.

Keenan Ashbrook is a Marcellus Policy Fellow with the John Quincy Adams Society and a Senior Analyst at Simon Everett, Ltd. His work focuses on national security, international development, cybersecurity, and strategic planning.