Why Shinzo Abe Is Banking on a Bromance with Trump 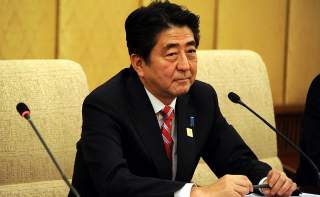 As U.S. president Donald Trump embarks on his foreign policy in earnest, one element will likely define his emerging approach to diplomacy: bromance. Indeed, he inherited his oft-fawning adoration of the Russian president Vladimir Putin well into his presidency, causing much consternation among many on Capitol Hill leery of propitiating Moscow. While the current geopolitical climate may justify the controversy surrounding Trump’s indefatigable exaltation of Putin, personal bond was largely missing from former president Barack Obama’s strategic calculus, often leading to diplomatic rigidity as demonstrated by the ongoing imbroglio in Syria. As Trump is scheduled to host a summit with Japanese prime minister Shinzo Abe on February 10, followed by a golf retreat in Florida, the new president has a historic opportunity to forge personal rapport with the leader of a key U.S. ally. Moreover, a bromance with Abe would lay a strong foundation for U.S. Asia policy in the Trump era.

In fact, Abe himself is keen on establishing a personal bond with Trump. Since taking office in December 2012, the Japanese prime minister has found his own niche by bonding with the world’s strongman leaders, ranging from fellow democratic leaders like Indian prime minister Narendra Modi, to Eurasian autocrats, such as Putin and Turkish president Recep Tayyip Erdoğan. A bromance with Trump would naturally fit Abe’s foreign-policy proclivities. Indeed, Abe became the first foreign leader to schedule a summit with the then-president elect at Trump Tower immediately after the November 2016 presidential election, demonstrating his enthusiasm for establishing a rapport with America’s newly minted leader.

Abe’s eagerness for the Trump presidency derives from his years of frustration with Obama. Although their reciprocal visits to Hiroshima and Pearl Harbor last year unmistakably showed the world the strength of the bilateral alliance, Obama and Abe never struck personal chemistry with each other. This was largely due to their perception gap surrounding Asia’s geopolitical environment. Obama largely resigned himself to “strategic patience” by restricting Washington's overseas defense commitment. The Japanese leader grew skeptical of his U.S. counterpart, because he viewed China’s regional challenges as a major threat to Japan’s national security. Indeed, Abe once even complained to his colleagues by accusing Obama of “not being strategic” in reference to the president’s regional commitment. Nonetheless, he remained patient and accommodating toward the president.

The opportunity cost of this attitude impeded Tokyo’s pursuit of global leadership. Tokyo has recently been bolstering its global engagement, largely with the aim of overcoming the lingering perception gap with Washington. The upshot was the rise of the Abe Doctrine, which promotes a “more assertive, high-profile, and high-risk foreign and security policy for Japan.” While this often catapulted Japan to the center stage of world politics, such as the 2016 G7 summit in Ise-shima, Abe’s high-stakes diplomacy often put him at odds with Obama. Their disconnect manifested itself most explicitly when Abe sought a balancing act against China by courting Moscow in 2016, leading Obama to lodge formal protests against Tokyo’s agenda. While Abe ultimately revived bilateral talks with Putin that year, Washington’s objections remained a major impediment to Tokyo’s bid for Russo-Japanese rapprochement.

Abe will visit Washington this week against a backdrop of bilateral inertia at the leadership level. Moreover, his enthusiasm for forging rapport with Trump is not unfounded. Indeed, Japan is perhaps the only democracy in the world that both enjoys unrivaled political stability at home and is willing to contribute to global stability. At a time when political volatility shakes the United States, and its democratic allies and partners across the globe, Japan is increasingly finding itself as a major defender of the liberal international order. Pledging to “build a nation that shines at the center of the world,” the Japanese prime minister reaffirmed his country’s commitment to its emerging global role in his policy speech to the Diet on January 20.

Trump’s first U.S.-Japan summit will therefore be a major opportunity for the new president to consolidate a special relationship with Abe. His focus must be to elevate such a relationship to a full-fledged bromance. Indeed, personal rapport has been a recurring theme in the history of the U.S.-Japan alliance for more than six decades, and has been crucial to effective alliance management. When then president Dwight D. Eisenhower hosted Abe’s grandfather, Prime Minister Nobusuke Kishi, in Washington in 1960, the two leaders succeeded in upgrading the alliance by leveraging their close personal ties despite Japan’s zealous, often violent domestic opposition. As Japan increasingly finds its new strategic role, a Trump-Abe friendship would hold the key to effecting structural changes to the alliance for Asia’s greater peace and stability.

In fact, getting tough on Japan could paradoxically improve bilateral relations. To be sure, Trump’s rhetoric has unnerved many in Japan, leading to serious domestic debate on the future of the U.S.-Japan alliance. Likewise, Abe was unprepared for the Trump presidency, but quickly saw a major opportunity in the new U.S. leader. Prior to the November 2016 summit at Trump Tower, Abe reportedly said, “If Trump gets tough on the alliance, we can leverage it as a pretext for greater independence from Washington.” In a country where changes are hard to come by without external pressure, the Japanese prime minister knows better than anyone else that Trump’s tough talk would provide Tokyo with a much-needed catalyst for drastic domestic reform. An honest U.S.-Japan dialogue at the leadership level, which was missing during Obama years, would be the imperative as Trump and Abe work toward a full-fledged friendship.

In pursuing a bromance with Abe, Trump must work with his Japanese counterpart to find a mutual consensus on the trajectory of Japan’s expanding security role in Asia. Lack of such a consensus frequently caused tension between Obama and Abe, as was evident in Abe’s bid for rapprochement with Russia. A free and open Indo-Pacific is vital to Japan’s national-security interests, and Tokyo has channeled its foreign-policy energy in recent years by diversifying its regional engagement with countries ranging from India to Russia. The upshot is an emerging regional liberal international order in Asia, led by Japan. Tokyo’s agenda is still nascent in development, but has the potential for playing a crucial security role at a time when Washington’s “pivot to Asia” is withering on the vine, absent its commitment to regional initiatives, such as the Trans-Pacific Partnership. In short, Japan’s growing regional commitment is indispensable to Trump’s Asia policy as he busies himself with domestic issues.

As Abe was about to board Japan’s own Air Force One at Haneda Airport ahead of the summit, he pledged to consolidate a firm personal relationship with Trump. The prime minister then related an anecdote on Kishi’s golf diplomacy with Eisenhower in 1960. “When my grandfather saw Ike,” recalled Abe, “getting upset as he left his birdie putt right in the jaws, the distance between the two virtually disappeared.” The Eisenhower-Kishi friendship did not last long, due to Japan’s own political upheaval at the time. As of January 2017, Abe enjoys a 67 percent approval rating and the longest Japanese premiership in recent decades, which will likely remain unchallenged until its expiration in 2020. As Japan emerges as the key defender of the liberal international order, a Trump-Abe bromance would function as the sinew of peace and stability in charting the uncertain future. Such a relationship would set the tone for Trump’s future engagement with other democratic leaders. Golf diplomacy at Mar-a-Lago will be a fitting starting point.