Why Some Countries See Kurdistan's Battle for Independence as a Threat 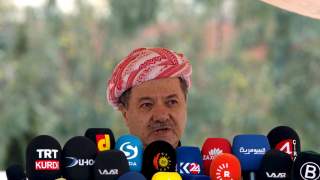 On September 26, the day after the Kurdish independence referendum, some current and former Kurdish politicians and their friends gathered at a restaurant that adjoins the Arabella Grand Hotel in Erbil, the capital of the Kurdistan Regional Government (KRG). Located near the local parliament, the men sat over a long dinner, endless courses of tea and some melon, and discussed the difficulties facing the Kurdish region the day after its historic independence referendum. Turkey was threatening to close the border where most of the Kurdish region’s exports and imports pass through, including hundreds of thousands of barrels of oil a day. Baghdad had ordered the Kurdish region to hand over its two international airports and was threatening to send its army to the disputed area around Kirkuk. Iran expelled Kurdistan24, a local channel and threatened other sanctions.

“We will see,” one man said. This seems to be the most common refrain heard in Erbil among pro-independence supporters. All the major parties in the Kurdish region supported the referendum, a unique degree of unity. With a 72 percent turnout and 93 percent of voters supporting “yes” for independence, many Kurds predict tough times ahead amidst regional opposition to their aspirations. The gathering at the Arabella Grand Hotel symbolized that. The locals discussed whether Saudi Arabia would aid the KRG because of mutual concerns over Iranian influence in Iraq and Syria. They hope that the large number of Kurdish voters for the ruling Justice and Development Party in Turkey would sway Ankara’s initially harsh response. They predict the international community would change its critical stance. Kirkuk oil would have to remain flowing and the United States would encourage Turkey to keep the border open, they predicted. “It doesn’t matter to us to face a year of hardship, in the end we will get what we want. We have land and we suffered genocide in the past. We can survive,” said one man.

Government minister Falah Mustafa Bakir, the head of the Kurdistan Regional Government Department of Foreign Relations, has sought to emphasize that the referendum is a legitimate and peaceful vote for self-determination. “I call upon and urge the international community to respect the will of the people of Kurdistan, which wants to be free and has suffered a painful past.” In an interview at his office the day after the referendum he stressed that the Kurdish region is not a threat to its neighbors and contributes to stability in the region, as well as the protection of minorities. “We will be patient, we will not be provocative,” he said. “We want de-escalation and we hope they [foreign countries and Baghdad] will see that and see us as a partner.”

Many foreign countries expressed concern and opposition before the referendum. The U.S. State Department and White House—as well as Special Presidential Envoy Brett McGurk—repeatedly warned against it. “This referendum is ill-timed and ill-advised. It is not something that we can support. That is not simply our position. That is the position of our entire international coalition,” McGurk said on September 14 in Erbil. Mustafa says that when he met foreign ministers of eastern European countries at the GLOBSEC Bratislava Global Security Forum this year many of them told him that when their countries sought independence they were also told it was not the right time. “So any time you chose is not the right time,” Mustafa noted, meaning counterintuitively, that it is the right time. “I’ve met many officials, state secretaries, ambassadors and media and there is a lot of sympathy and understanding and support for our right to self-determination. They are not against Kurdistan,” he said. Although some oppose the right to self-determination, most are concerned more about issues in the region, such as the upcoming Iraqi government elections, and the defeat of Islamic State in one of its last Iraqi holdouts in Hawija, which is just southwest of Erbil.

The Kurdish region wants to think in the long-term, but the short-term looks difficult. The region has enjoyed unprecedented autonomy since 2003. It runs two international airports and controls its own border. It exports its own oil. Although it doesn’t issue its own passports, it does have its own visa rules. For example, Americans and others can travel visa-free to Erbil but not Baghdad. Although it has suffered a deep economic crises because of three years of war on ISIS and Baghdad cutting the budget to the region, its major cities, such as Erbil, Sulaiymaniyah and Dohuk, boast modern infrastructure and a relatively good economy.

The largest challenge the Kurdish region faces is relations with Ankara. Recent articles in the Turkish press have alleged that Ankara is searching for “alternative trade routes to Baghdad” to bypass the Kurds. On Wednesday, Turkish prime minister Binali Yildirim spoke with Iraqi prime minister Haider al-Abadi. The two countries have grown closer in opposition to the referendum with reports of joint military drills. Now Turkey has indicated it will deal “exclusively with the Iraqi government” as opposed to Erbil. This is a major shift from February when KRG president Masoud Barzani met Turkish president Recep Tayyip Erdogan in February and the Kurdish flag was hoisted at the airport. In October 2016, Baghdad threatened Turkey and warned of conflict because of a Turkish military base in northern Iraq. That was the high point of Erbil’s relations with Ankara. Now seems to be the low point. This is because Ankara views the KRG’s decision as a kind of betrayal. They have supported Erbil with a special relationship and expected a kind of quid-pro-quo. Now, Turkey has not only upped pressure on the KRG and grown closer to Baghdad, but it has also pressured Israel over Benjamin Netanyahu’s comments supporting the referendum.

The next immediate concern to the Kurds is Baghdad’s threat to send its army to the areas around Kirkuk. Kirkuk, sitting on an estimated four percent of the world’s oil, has been central to Kurdish claims against Baghdad in conflicts from the 1970s to 1990s. The status was supposed to be determined after the 2005 Iraqi constitution, but never was. Since 2014, when the Iraqi army retreated in the face of ISIS, the Kurdish Peshmerga have successfully defended Kirkuk. Dr. Kemal Kirkuki, a Peshmerga commander and former speaker of the KRG parliament has been central to protecting the areas around the city. Like other Kurdish leaders he says the international community should respect the democratic process in the region. At his headquarters north of Kirkuk he also says Baghdad has proved a failure to defend the country’s security and has often persecuted Kurds. “In the last thirty years we suffered five genocides against us. How can we continue to live with [Iraq]. We should be separate from them and we need to build a democratic land and we hope to have peace and be good neighbors.” South of Kirkuk the Shia militias, called Popular Mobilization Units or Hashd al-Shaabi, that were incorporated into the Iraqi security forces in 2016 may threaten Kirkuk. “The Hashd cannot do anything without coalition air support. We hope they go back peacefully and will not make problems. If they try to do something we will show them what will happen.” In a show of determination, videos were posted to Peshmerga Facebook groups showing Kirkuki and Peshmerga generals reviewing troops on September 27.

For the United States the current crises between Baghdad and Erbil, which involves U.S. ally Turkey and regional antagonist Iran, ostensibly affects the war on the Islamic State. This was the reason given by the United States for opposing the timing of the referendum. But the opposition is more deep-rooted. It goes back to 2003 and America’s attempt to reconstruct Iraq as a successful ally and democracy. When the U.S. troops left Iraq in 2011 there was realization that Nouri al-Maliki’s pro-Iran government was not the success initially envisioned. The war on ISIS by the seventy-nation coalition under the Combined Joint Task Force, Operation Inherent Resolve, is limited in scope and designed to leave a small footprint. It is “by, with and through”, the Iraqis and Peshmerga forces who have led the way. The U.S.-led mission is designed to advise, assist, equip and enable the Iraqis and Peshmerga.

The reaction of Baghdad to the referendum while the Iraqi army and Shia militias are conducting operations in Hawija could lead to a confrontation near Kirkuk. The Hawija operation was initially envisioned as a close cooperation with Peshmerga and Iraqi’s forces, transporting some Iraqi army units within Peshmerga lines as was done before Mosul. Now that Baghdad has threatened Erbil about Kirkuk there seems little chance the Iraqi army could move amicably north into Kurdish-controlled areas. For the United States this is a headache the administration doesn’t want as it deals with North Korea, the Iran deal, and many other issues around the world. The United States maintains significant assets in the Kurdish region, including a base at the Erbil airport, a training center that other coalition members partner with to train Kurdish forces and special forces deployed with Peshmerga near Hawija. The referendum has caused the coalition-backed Kurdish Training Coordination Center to temporarily stop training.