Why a Special Counsel Could Be Good for Trump 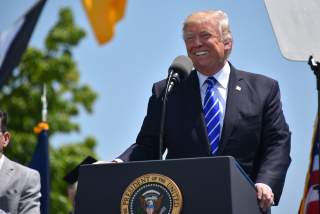 Donald Trump may have learned about the appointment of a special counsel to look into Russian interference in last year’s election less than an hour before the news went public, but he took the news calmly—at least until this morning. The timing might have been a surprise, but the result should not have been: from the day last week when the president fired FBI director James Comey, the appointment of a special counsel was inevitable. Another former FBI director, Robert Mueller, will now fill that role. This is surely an annoyance to President Trump. But it’s also a lifeline for him.

This president ignores the old ways of doing business in Washington. All presidents enjoy wide-ranging authority to hire, fire and direct the behavior of executive-branch personnel, including those in the Justice Department and FBI. But most other presidents have been hesitant to use that power overtly to quash investigations as sensitive as the Russia probe. Donald Trump, by contrast, is shameless, or at least unembarrassed: he makes decisions based on what he wants at a given time, not based on what the seemly way of doing things is supposed to be. So he fired Comey in the midst of another flare-up in the Russia story, and by doing so he breathed life into accusations that he was obstructing justice.

Trump is Trump—he may never adopt Washington’s ways. And so, even having dug himself into a hole by firing Comey, his response to the problem was always likely to amount to digging deeper. To step back, cede control and the let the process work itself out is not Donald Trump’s style, not when he’s become engaged in something—and not even when his own best interests might counsel a hands-off approach. If the decision had been left to the president, he would never have changed his strategy. More heads would roll, and the limits between obstruction and the president’s legitimate discretion would continue to be tested.

Now Trump doesn’t have to worry about managing things his way: this case is going to be managed Mueller’s way instead. Mueller’s approach will be by the book, Washington style, not only legally but in the observance of customary propriety. The president will chafe, but he’ll be better off than he would be handling this business on his own. By appointing Mueller, Deputy Attorney General Rod Rosenstein has done his boss a service that might not be much appreciated, but it’s a service nonetheless.

That’s assuming the president has, as he has said, “nothing to hide.” It’s also assuming Mueller does his job honestly, not with an eye toward using his investigation to reshape the nation’s politics. But there is no reason to think Mueller comes to this task with a hidden agenda, just as there is no evidence so far to suggest the president himself has committed a crime. Trump’s routinely shocking behavior leads his critics to assume he has the character of a criminal, and therefore must be a criminal. As yet, the FBI has uncovered nothing to support that prejudice.

This is not to say that Mueller’s investigation is going to be painless for the president and his associates—far from it. Almost inevitably, there will be leaks: fragments of Mueller’s work, selected and distorted for maximum political impact, will find their way into the press. Closed-door meetings that the president holds with foreign officials and a half dozen top advisers and their aides somehow wind up spun and summarized by anonymous sources in the New York Times and Washington Post these days. A sprawling investigation like Mueller’s can be expected to produce many more stories of that kind.

Mueller’s investigation will provide a standing rationale for Congress to conduct further hearings of its own, and if control of Congress changes hands after next year’s elections, these congressional inquiries could become mortal threats to President Trump—if not conjuring the specter of impeachment, then haunting him throughout the final years of his term before he comes up for reelection in 2020. If Mueller has not reached any conclusions by then, the simple fact of the ongoing investigation will threaten to do to Trump what the open investigation into Hillary Clinton’s private email server did to her in 2016. It may seem unfathomable that Mueller’s investigation could drag on for so long, but these sorts of inquiries have a habit of lasting longer than anyone expects.

As Mueller and his investigators interview past and present Trump associates, occasions will multiply for somebody to lie to investigators, thus creating new crimes even where old ones might not exist. There are almost certainly going to be a few Trump loyalists who will have reason to call on the president to use his pardoning powers. The situation already looks serious for former National Security Advisor Michael Flynn, who has been the subject of  grand jury subpoena for documents relating to his work for foreign governments, including those of Turkey and Russia—although, according to NBC News, “One source who viewed a grand jury subpoena in the Flynn case said it was unusual in that it did not specify any law that allegedly had been broken.”

The Russia investigation has the potential to turn into a fishing expedition—the president may believe that’s what it already is—no matter how carefully Mueller conducts it. But even an independent investigation that balloons out of proportion has a credibility that no process perceived as more easily shaped by the president would have. President Trump may not put great stock in what passes for credibility in Washington and with the media. He has learned all too well over this past week, however, just what damage the absence of credibility can wreak. The only way he will be ever free from the ghost of Russia’s election meddling will be if someone else performs an exorcism—and that is now Robert Mueller’s job.