Why Is Steve Bannon Torching the Trump Administration? 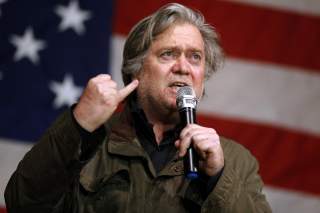 Well, well, well. So Steve Bannon, a professional intellectual and political arsonist, is setting about torching the Trump administration. There is a long tradition of former aides accusing their old employers of failing to adhere to the true faith. And there is nothing that Washington enjoys more than this spectacle. A few years back I wrote a piece for the New York Times about the genre of the dyslogistic memoir. During the Bush administration, for example, Paul O’Neill, Richard Clarke and Scott McClellan each voiced disappointment with the actions and record of their boss. Earlier efforts included Raymond Moley’s After Seven Years, which denounced what it saw as Franklin Roosevelt’s leftward lurch. Emmet John Hughes, a presidential aide and speechwriter, portrayed Dwight Eisenhower as a weakling who ruined the GOP. John F. Kennedy even worried about whether he harbored a similar turncoat in his own administration.

Now Trump knows who has the knife out for his top aides. It’s Bannon who is sometimes reputed to have his own presidential ambitions. According to a report in the Guardian, Michael Wolff, the author of a new book called Fire and Fury: Inside the White House, has Bannon on record as stating that the June 2016 Trump Tower meeting in New York between high-ranking campaign officials, including Paul Manafort and Jared Kushner, and Russian lawyer Natalia Veselnitskaya was “treasonous” and “unpatriotic.” Those are fightin’ words.

And there’s more: Bannon, who clearly has it in for his old antagonist Jared Kushner, notes that they “should have called the FBI immediately.” Bannon also predicts, “They’re going to crack Don Junior like an egg on national TV.” According to him, “This is all about money laundering. . . . It’s as plain as a hair on your face.” Hmmm.

Bannon’s words have already caused other splits in the conservative ranks: in a tweet on Wednesday morning Matt Drudge called the man “schizophrenic.”

On Tuesday, Fusion GPS had a lengthy piece in the New York Times alleging that the Christopher Steele document was just a part of its wider investigation of Trump, and that Trump and “his organization had worked with a wide array of dubious Russians in arrangements that often raised questions about money laundering.” But Bannon appears to be going even further with his incendiary comments. Maybe it isn’t the Democrats who will bring down Trump, but his own vituperative inner circle. In any case, it’s worth noting that Bannon’s accusations and statements go way beyond anything previous administrations have experienced. Treason? Unpatriotic? Gulp—once again, the Trump administration is setting a new bar, but not in ways that it might have hoped.

The problem for Trump isn’t that he has not heard such accusations before. It’s the source. Trump has been in overdrive to portray his adversaries as a bunch of conniving Democrats and members of a “Deep State” who are searching for ways to explain away Hillary Clinton’s defeat in 2016. It will be difficult for him to depict Bannon, in many ways the author of Trump’s improbable victory, and a staunch nationalist, as a lily-livered liberal. Breitbart as Fake News? Even for Trump this would be a stretch. Trump, for all his objurgatory ingenuity, is unlikely to be able to one-up Bannon when it comes to his comments on the campaign and Russia.

Congressional Republicans who are eager to defend Trump will likely seek to portray Bannon as a loose cannon who is only out for himself. The best line of attack on Bannon will probably be that he was knee-deep in whatever took place during the campaign, and simply seeks to extricate himself from the Russia investigation by turning on his old confederates.

Bannon’s motives are one thing. But the real question has to be why the Trump administration ever gave Michael Wolff, who apparently conducted several hundred interviews in the White House, this kind of access. It isn’t just Bannon who disses the administration. Michael Wolff also quotes Thomas Barrack Jr., one of Trump’s billionaire chums who oversaw the inauguration, as stating about Trump that, “He’s not only crazy, he’s stupid.”